Rome? Disneyworld? Both boxes have been checked in the past week by the crafterhours girls. And guess what? While we are continents apart, both of us are sick. As are the kids. You already know this, I’m sure. Because kids touch everything. Travel + kids keep you up later than usual, your immune systems are less than optimal… bah bam. Snot. Coughing. Misery. (Yay, travel!)  Adrianna is apparently reeeeally feeling it, because she said something about needing to birth a third child to thank the person who is taking care of the first two right now. In her world, that is a bad bad scene when she starts volunteering to be pregnant again.

So while there’s rest and healing all around, I thought I’d share this:

In prepping for Halloween last year, I was really excited to do a family costume theme. We were going to a party with lots of folks and trick-or-treating for kids. And our kids are small enough that they wouldn’t be going (too) far from us. Might as well stand together in costumes that relate, yes? And I wasn’t in an off-the-rack frame of mind. After all, I was already working on my first ever piece of clothing for myself, why not DIY some costumes? Easy peasy.

I started here and bought three flight suits. I couldn’t get a guarantee in talking to customer service that the suits would be exactly the same color, but I crossed my fingers. They arrived and matched. Big sigh of relief.

I used scraps of black fabric and red thread and machine embroidered names for name tags. Venkman, Spengler and Stantz.

While I was working I downloaded the theme song. Added to the excitement for everyone.

I printed fabric patches for the arms. 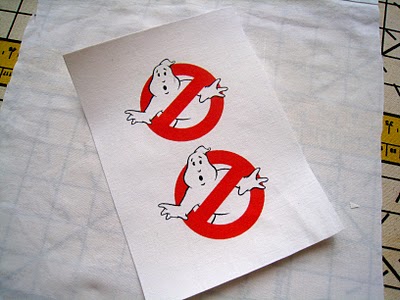 The “Slimer” costume was super-simple. Just a bright green fleece cocoon with short wavy arms tacked on in front of slits for M’s real-life short wavy arms. The hoodie part didn’t stay on her head much. She was too busy socializing at the party. This is the beginning of the body with some horizontal chubby lines. And this photo reminds me how much I liked that nail polish color. 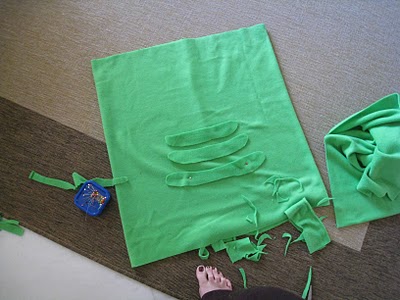 Since I couldn’t find all of the proton pack supplies I needed locally (without great distress/expense) I enlisted my family to help collect and send plastic tubing, strobe lights, garden sprayers, pipes, black duck tape and utility belts. Thanks Dad and Deb!
With kids in bed, very helpful husband and I got to work spray painting and assembling the proton packs. We started by fitting cardboard boxes around backpacks we already had. (During the party, the proton pack also served as “diaper bag”.) I found ready-to-print pages here that made dressing them up easy. I also already had some cosmic spaghetti units to wrap around the wands so that they lit up. It was impossible to get a photo of all of the strobe lights lit at once. So here’s one of three in action. 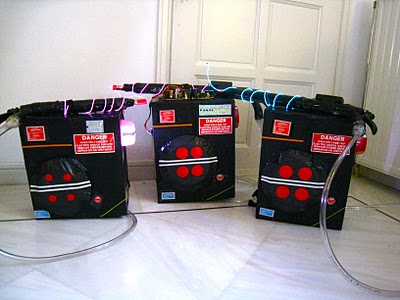 Plenty of creative license was taken here. For example, as far as I could find the movie characters never wore olive drab. But it’s not like anyone was going to think we were the real Ghostbusters anyway. Although you can see in this photo that K took her job so seriously that M/Slimer actually looks fearful. 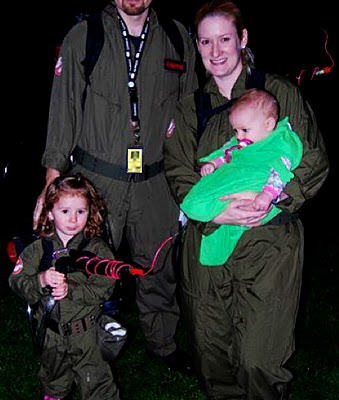 I didn’t bother with the ghost trap. As you can see, I already had my hands full.

I hope Adrianna is going to show you her costumes from last year. They’ll suck the life right out of you. In a good way, of course.