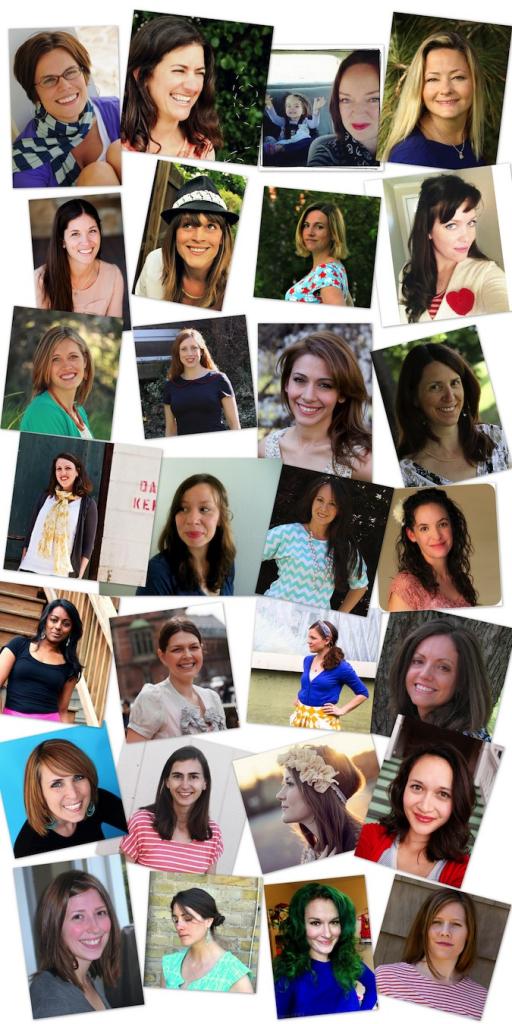 It’s time to meet the judges! The very first year that we ran skirt week we judged it ourselves. BIG MISTAKE. It wasn’t that we weren’t sure that we’d chosen well, it was that we thought the process of making those choices was long and brazilian wax painful. There’s so much skill and creativity that goes into the process, and it hurt that we couldn’t make a whole lot more of ’em winners. So… the second year and ever since, we’ve called on a group of bloggy and crafty people to H E L P. And this year, just like the others, just about every e-mail we got in return said “I’m done, but that was SO much harder than I thought it would be!” Yes, exactly, we say. There’s so much amazingness in these four groups of skirts. The judges have helped by combing through allll of the entries to choose the top 10 for voting in each category.

The photo collage up there is image mapped, so you can hover over any of the lovely faces and check out the related blogger’s blog. Many of them have said that because of the judging they too discovered new blogs and bloggers! It’s fun for everyone.
You can see all of the Skirt Week submissions by looking in the Flickr pools – A-line, Straight, Full, Children’s. A warning– because of varying entrant privacy settings you’ll need to be sure you’re logged in to Flickr and join the group to see them all. Unless you’re a member of the group there may be a few that are hidden to casual viewers.

Sound fun? The chatter over favorites during voting week is the best part, so if you have crafty friends who like this sort of chance to debate, share now!
Thanks, judges, for making our jobs so much easier, and thanks to all of those who sewed along, and to all of those who are following the fun!