This is an unnecessarily long story.

I apologize in advance.

On Sunday, while visiting my mom with K, 4, and M, 18 months, I decided that they could handle an overnight with my Mom, Mimi, without me. We’d been at Mimi’s house for a few days and everyone seemed fairly settled and happy. And for the first time in nearly five years, I was neither nursing nor pregnant. For two or three weeks M has been quite happy being all done with nursing. I was a tiny bit sad about that milestone, and it came six months earlier with M than it did with K, but they’re different kids and… it was her time. Random personal information, I know. But we’re close. I feel like I can share that with you. (Adrianna, reading this, is probably nervous that I’m going to throw in a reference to breasts. Chill out, A, I’m not.)

So looking at them playing with Mimi, and knowing that I could make a two hour drive to attend a party at my brother’s house and be back the next afternoon without traumatizing anyone… I decided to go for it. My first night away from both kids.

I had decided to attend at the veeeery last minute, so all the party needed was some ice. Everything else was covered. While I picked that up, I decided to bring a party craft. Because in my world party crafts are always fun. Nevermind that I was the ONLY person at this party with children and. I thought about that likelihood, but decided to stock up anyway.

There are lots of versions of these turkeys out there, and I was planning to go with the standard candy corn variety. I figured if the party wasn’t craft-hospitable that the supplies would go home with me and K would love it the next day.

Gathering Double Stuff Oreos, Whoppers, mini Reese’s Cups and icing, I headed to grab the candy corn. I hate candy corn. I think it’s super gross. I like to look at it, I hate to eat it. But I’d use it in a craft, no big deal. Except… there was none. Just a big empty hook where the candy corn should be.

That would not work.

Pizza ones are a deep orange. Baby ones are tiny and a lighter orange.

So we did end up making them at the party. And with just two extra Whoppers we figured out that you can make a Chernobyl turkey (invented by a doctoral student who studies the effects of Chernobyl on wildlife!) or a Dolly Parton turkey. I’ll spare you those photos.

And the leftover supplies did come home with me so that K could both make and eat her turkeys.

And now I think in the future all of my edible turkey making endeavors will include Goldfish. Maybe the rainbow ones next time. 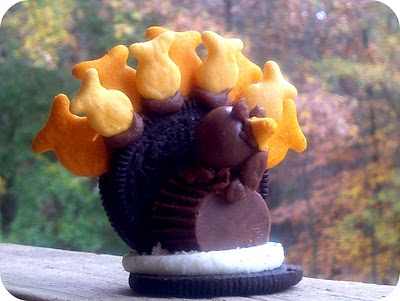