Yeah, seriously. Actually, two of them. But “holey sheets” didn’t sound as fun.

I love jersey knit sheets. Especially for kids’ beds. But apparently there’s something tempting about them. Tempting to pull at them or poke a pencil through them or…. well… honestly? I have no idea where these holes came from.  I was dismayed to find them. The kid we’re talking about here is 4. “Four-and-a-quarter” if you ask her how old she is. And if you ask her how the holes got there, she’ll just shrug and say “I don’t know.” Riiiiiiiight. I know that when I first put these sheets on the bed, there were no holes. And now there are.  Curious.

Both of the holes are smallish. I thought briefly about doing the eyeball thing. But I think I’ll save that for another occasion. Might be too creepy at bedtime. We’re already talking a lot about monsters. I don’t need to add fodder to that. 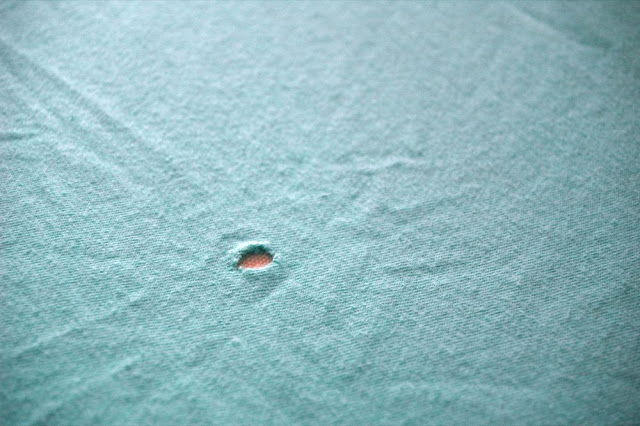 This one begged me to let it speak for itself. 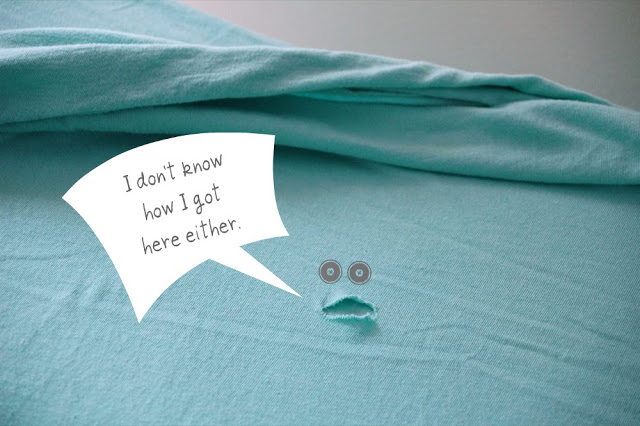 To remedy the holey sheet(!) situation, I decided two simple patches would work. I guess I could’ve tried to patch them from the reverse side and pretend it didn’t happen, but in my mind it’s not worth the effort. Really I’m just trying to keep the holes from getting any bigger so that the sheets will last longer.  Fusible interfacing to the rescue. I keep all of my fabric scraps that have the stuff (Heat n’ Bond, Steam a Seam, Stitch Witchery) in a bag for quick projects like this. It’s a very, very fancy zippy bag. 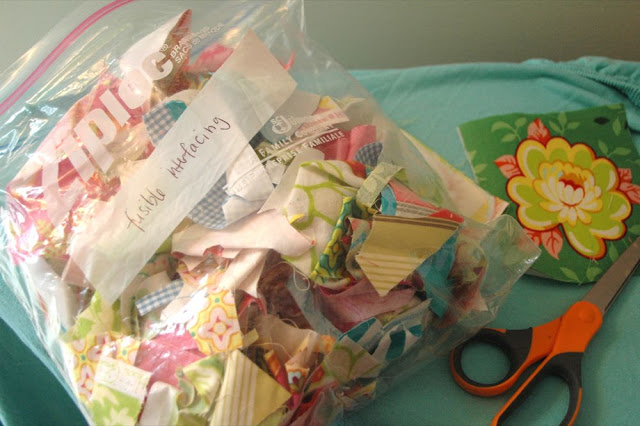 For each patch I cut a heart out of scrap Heather Bailey fabric. I could’ve cut out around an existing flower shape in the print, but I didn’t want anything that big or busy. Keeping it small and simple. Also makes it easier to stitch around the edge. 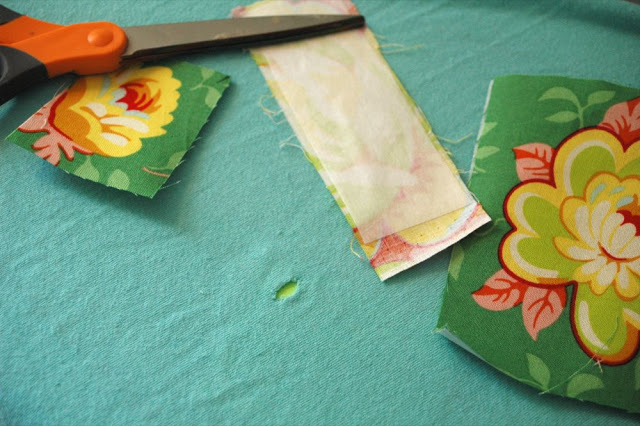 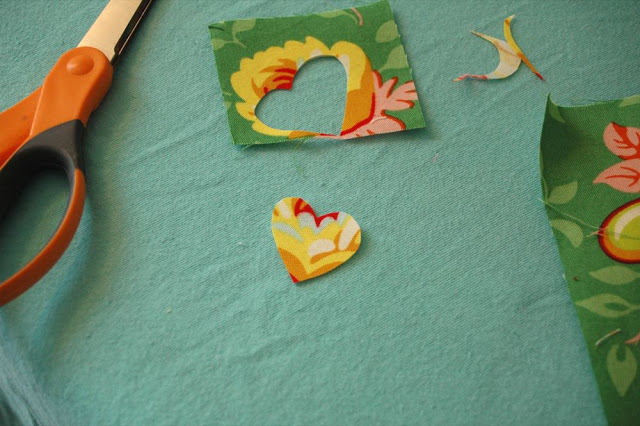 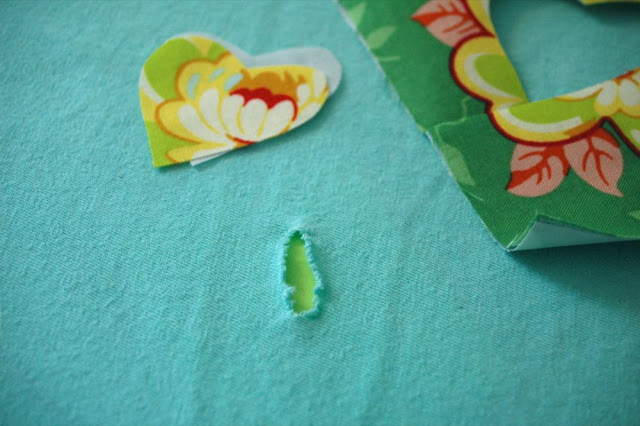 I just put the applique where I wanted it, put a piece of scrap paper behind the hole so that the applique didn’t stick to my ironing board and ironed it down. 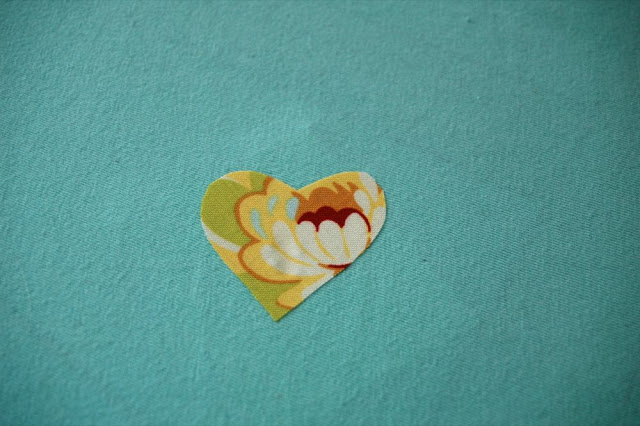 Quick stitching around the edges to be sure it wouldn’t peel off. I’m quite sure the same fingers that poked at the original hole will try to peel this thing off like it’s just a sticker. I used a very small stitch length to help keep it on there. 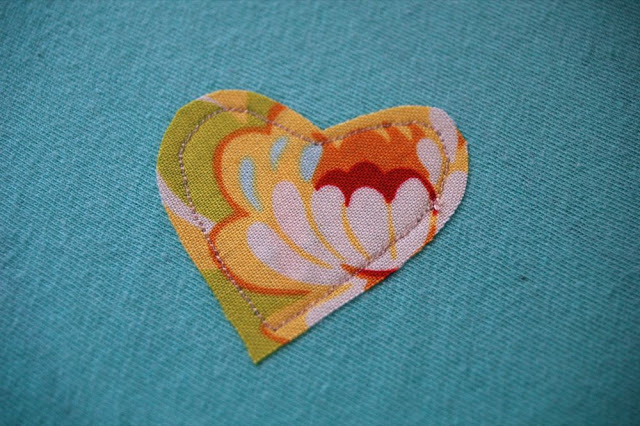 K was pretty pleased with the patches. She looked so pleased, in fact, that we then had a quick conversation about how the patches are cool and all, but if she ever wants to put holes in something on purpose…. let’s talk about it first, okay? She thought it was cool that she could feel the hole underneath. 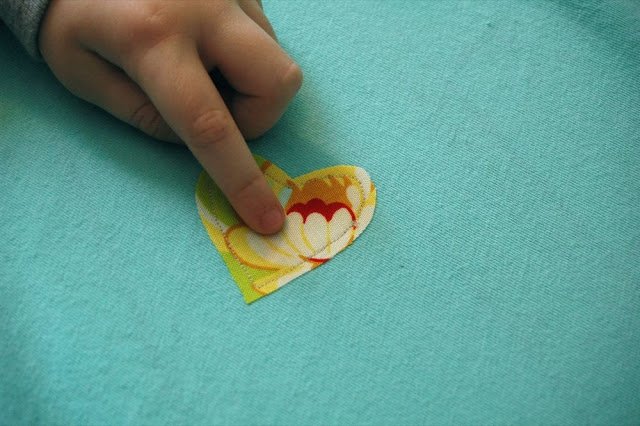 I thought that by doing this I’d be solving a problem and could get back to other things on my to-do list. But now I just want to applique more stuff.  And put eyeballs on something.

« The Best Crayons Ever
PJs for PJ »