I know, I know. It’s been a while since we’ve done a “Crafty Bits” post, and I’m starting it up again with Las Vegas?

Las Vegas was not on any of my recent must-see travel lists. I’ve been there and done that before kids, and since having them I haven’t had a burning desire to go back. But when my husband mentioned that he might have a work trip I was packed before the sentence was fully formed. It didn’t matter to me where he was going, if I could go with him and take a momcation for the first time since I became a mom almost five years ago, I was READY. Time with baby daddy was a bonus.

God bless my mother-in-law. She made it so ridiculously easy to go and relax and not worry about the girls. And when I came back she even communicated about the week using the words “if we do this again” like I hadn’t just used my one and only getaway credit EVER. God bless her. Really.

So since I was in Las Vegas for a whole week and have a really, really low threshold for both alcohol and gambling these days, I spent some time doing all sorts of other things I wanted to do.

The first mission was to go fabric shopping. Some searching lead me to check out several quilt shops, and one of them was far and away the coolest. Quiltique. It’s waaaaay off of the strip, but I say that mostly because it feels so different from the strip. It’s in nearby Henderson, Nevada.

The store is owned by two sisters, a mom and a dad. Can we start with how adorable the logo is? 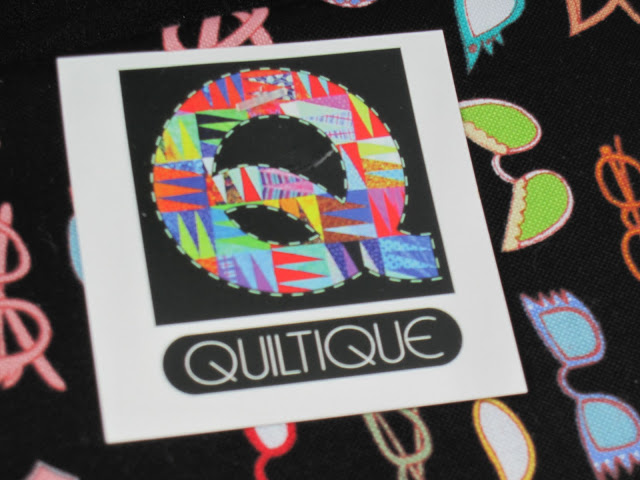 The natural light in this store is one of the things that sets it apart from many others. Why do so many fabric stores have so little natural light? I know it’s a challenge to protect fabrics from fading and probably also to keep a building with windows cool in the Las Vegas heat. But it’s so much easier to be inspired by and choose fabric when you can really see it. There were lots and lots of windows.
Here’s one of the seemingly millions of shelves of fabric. I loved that the shelves above each and every row of bolts held the corresponding fat quarters. So easy to grab bits of things you’d like to use in a small project or pick a bunch to mix in a quilting project without dragging bolts around. 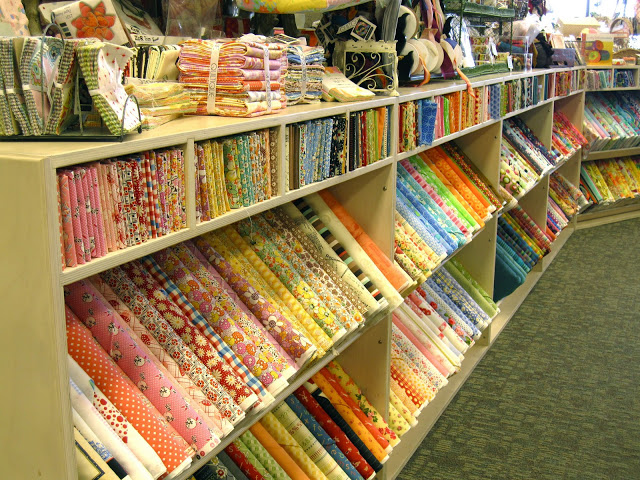 While I was in Las Vegas I got an e-mail from Care about another I Spy swap. Perfect timing! I got everything I needed in one trip. So so so many choices. 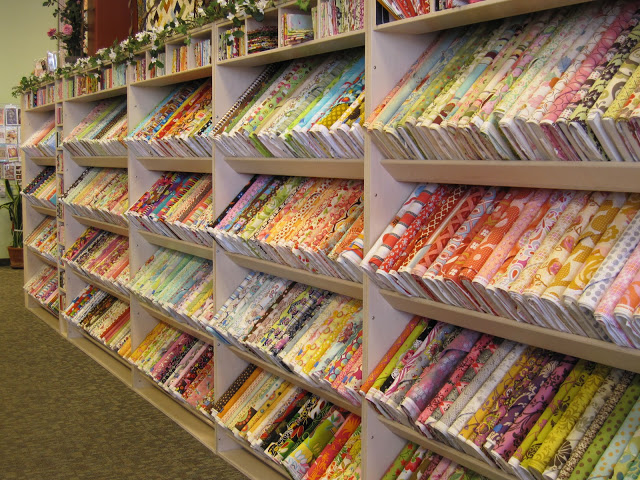 One of the I-Spy fabrics I chose was this one. Except… what are these guys called? “I Spy a…… I don’t know what that is” doesn’t really fly. Please someone tell me what I’d call these: 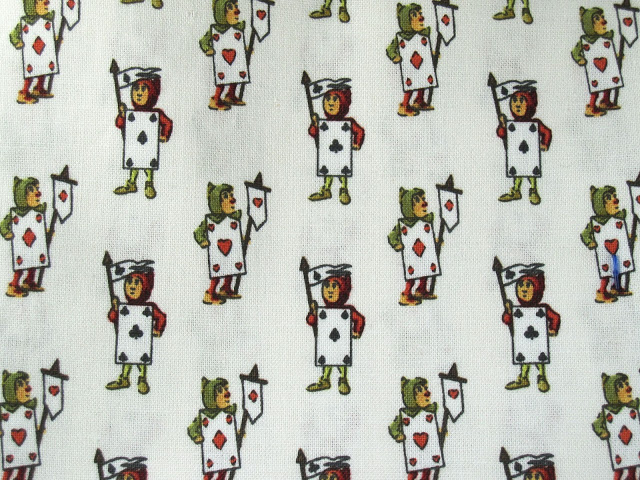 Sewing has created some unexpected attachments for me. Like rounding a corner and seeing a stack of fabrics that I’m so familiar with I feel like I’ve suddenly tripped over a friend from high school. Fabrics like these: 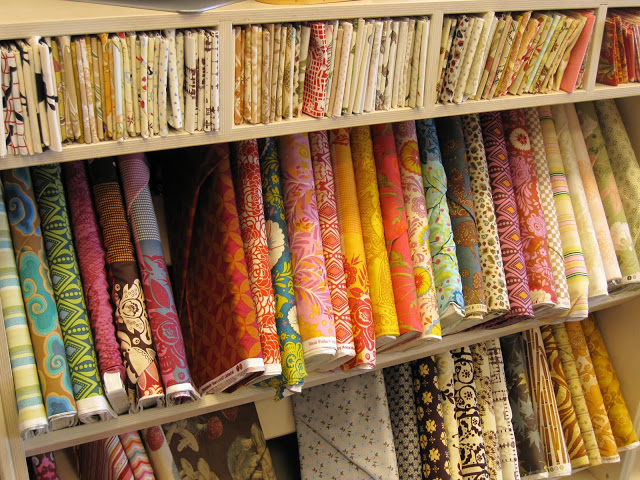 More AMH in this corner along with a cozy spot for kids to hang out while mom blows the grocery budget on fabric. 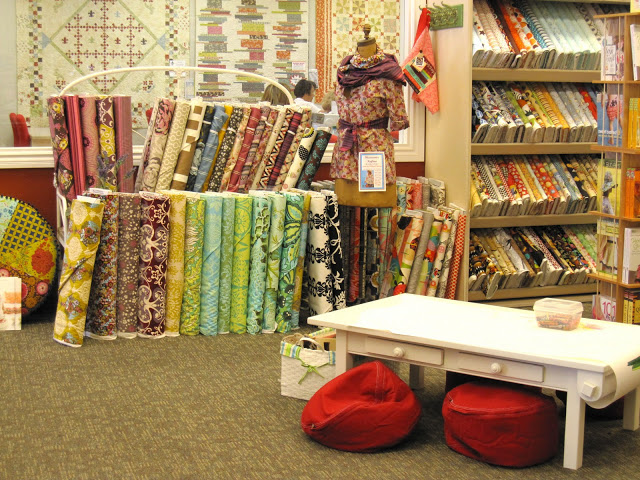 While waiting for my turn at one of the fabric cutting counters (there are three!) I enjoyed the view of all the notions I could ever need. 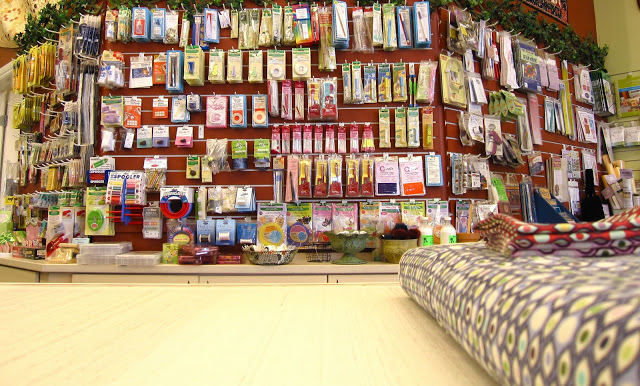 And around the corner from the cutting table there was a long arm quilting studio. It’s the biggest long arm quilting machine I’ve ever seen. I was too scaredy-cat to go in there and be nosy, but looking back I don’t think anyone would have stopped me. 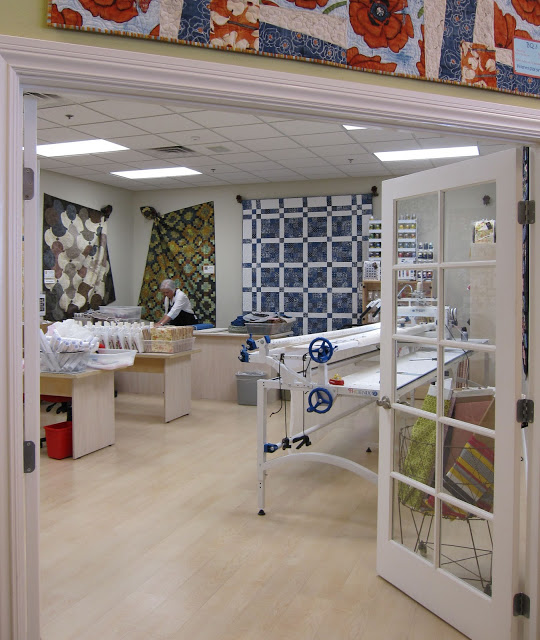 They had lots of not-necessarily-quilting supplies scattered around the store. Among them I found this vinyl that looks like tooled leather and had to take some home. Makes me sort of wish that I a) had a boy and b) was in favor of guns because this would make really cute holsters. Short of a&b being true, I think it will make fun belts. 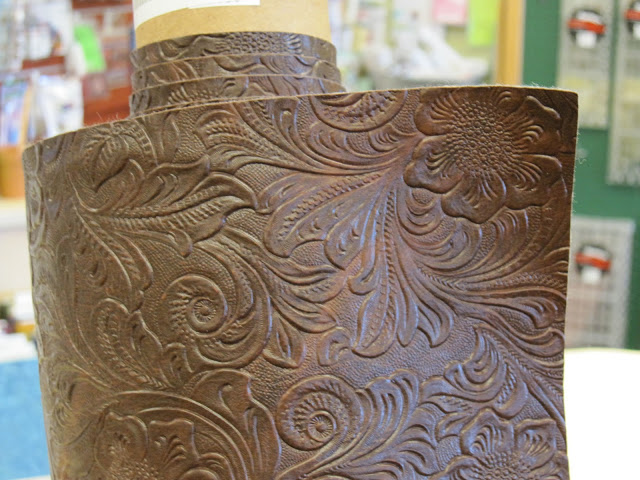 I made two trips to Quiltique during my week in Vegas. One with husband and one without. Not so much an issue of worrying about what he’d see me buying as much as an issue of not subjecting him to waiting for me while I savored the experience. Especially since I also dragged him on another trip…
One day we were driving down the strip. Since I wasn’t driving I was looking up and all around at the signs and lights and general Las Vegas ridiculousness. And a store window caught my eye. A store window that I had to squint at to be sure of what I was seeing. Sewing machines. HUNDREDS of them. We didn’t have time to stop at that moment, but I knew which building to return to.
And return we did. Here’s a view from inside the store looking down at the strip. 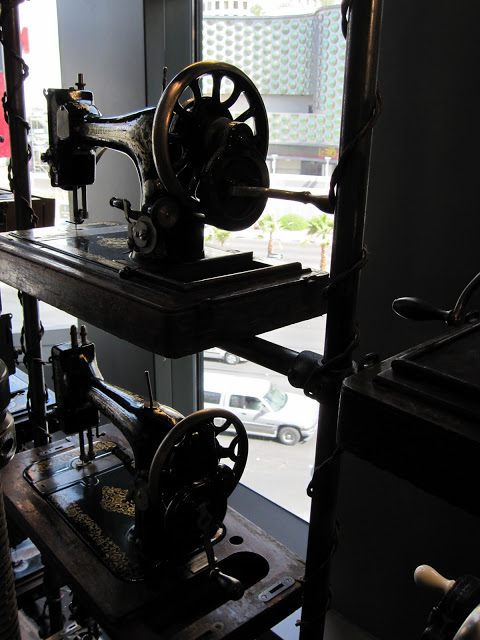 The store is in the new Cosmopolitan shops. I didn’t know what the store was called until we took the escalator up and found this. 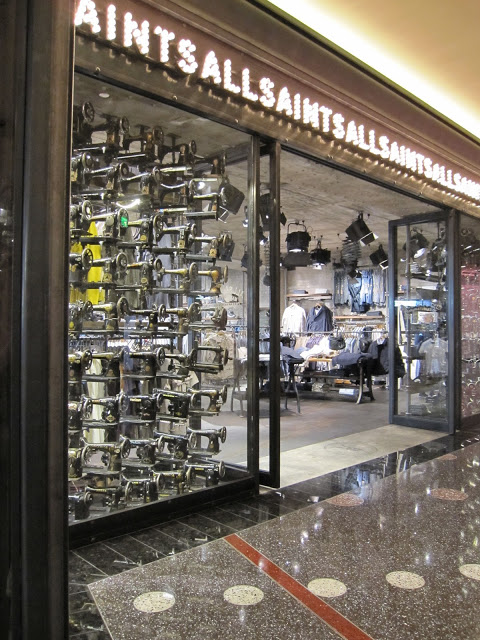 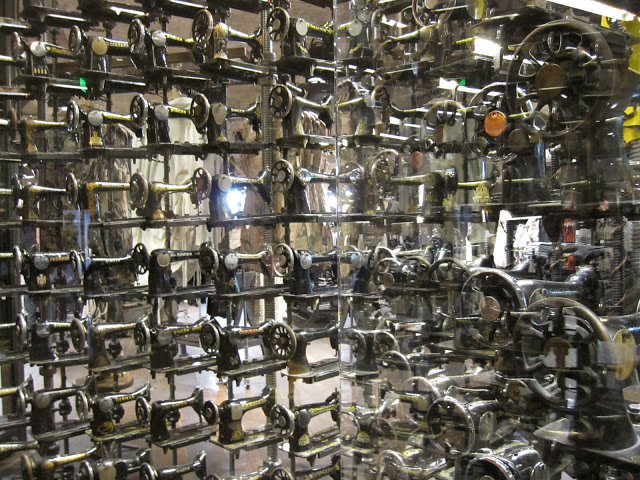 The entire front and back of the expansive store are covered with stacked sewing machines. 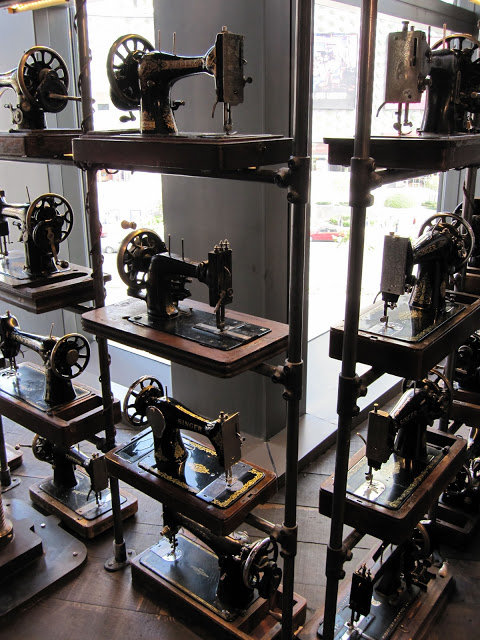 The few that I was obnoxious brave enough to touch still move and have working parts.
No one seemed to notice or care that I was more interested in checking out the sewing machines than anything else. Like this gigantic one. 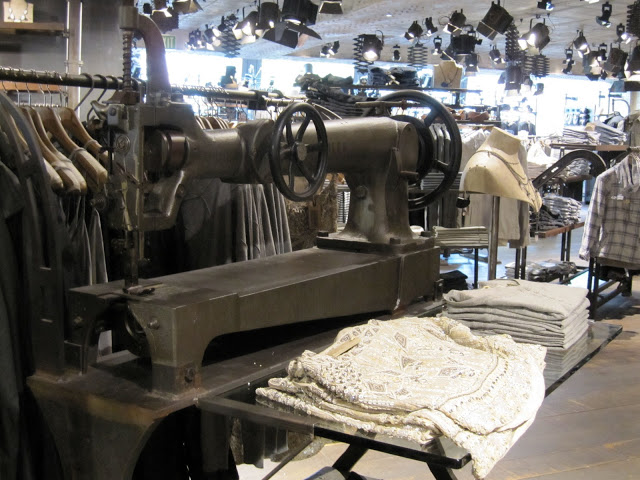 Pretty easy to get lost among them. 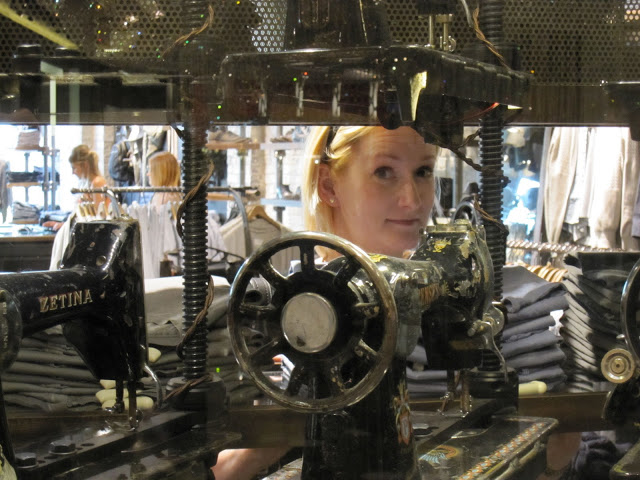 I did eventually notice that the clothes and accessories were interesting too. And totally my color palette– black, white, grey and pops of color. 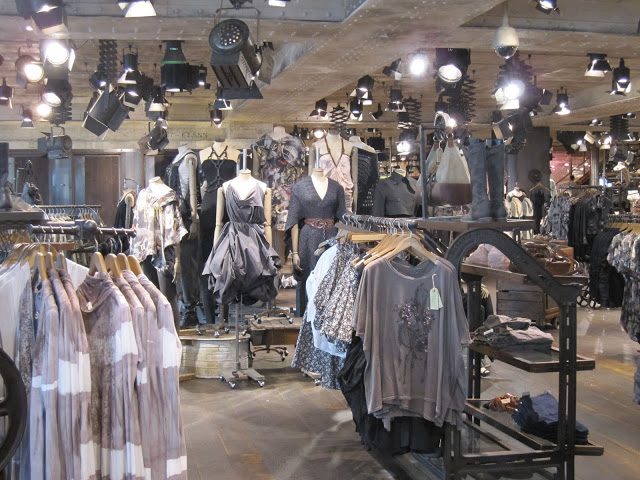 I didn’t realize until I looked All Saints up online that it’s a UK-based clothing company. And once I found their website I spent forever there. Could be the inspiration I need to do some “me” sewing. 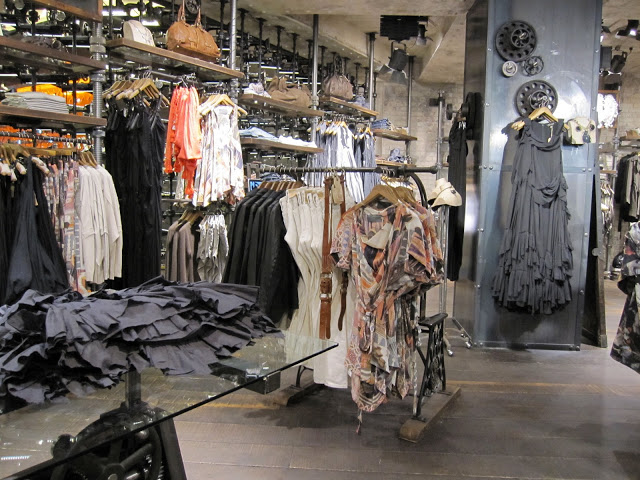 Finding Quiltique and All Saints were both high points of the week full of high points– the time away from everyday things that I needed to inspire me to go back to the everyday things feeling energized. And grateful. I don’t hear many people talk about leaving Las Vegas feeling grateful? Or writing blog posts about a trip to Las Vegas filled with photos of a quilt store and sewing machines.
To each her own.

P.S. Have you picked your own Shabby Apple favorite yet?