[This is a re-post from September when it was included as part of the Holiday Bake, Craft, Sew Along series.]
Today I’m sharing a tutorial for an item that can fall into all four categories– a Santa Bag. It was inspired by one I bought at Pottery Barn Kids before I started sewing regularly. Once my machine and I became BFFs, I realized they’d be far less expensive to make myself and I’ve loved watching my girls play with it. It comes out as a decoration after Thanksgiving, and then gets dragged all over the house for imaginative play. 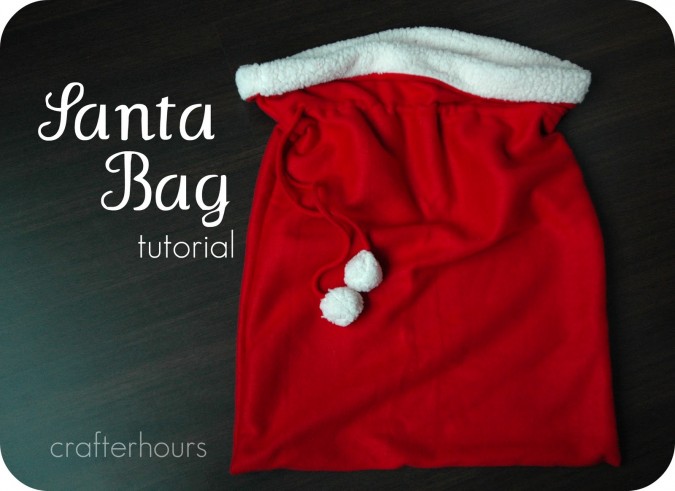 I don’t think I finally managed to put it away until June this year, because they kept finding it and filling it with things. It has been on my to-do list because I think several of my friends with kids would also enjoy it, and as far as holiday decorations go, it’s pretty compact when it’s time to pack it away. If you can convince the kids it’s time to make that happen.
Here’s what we’re going for: 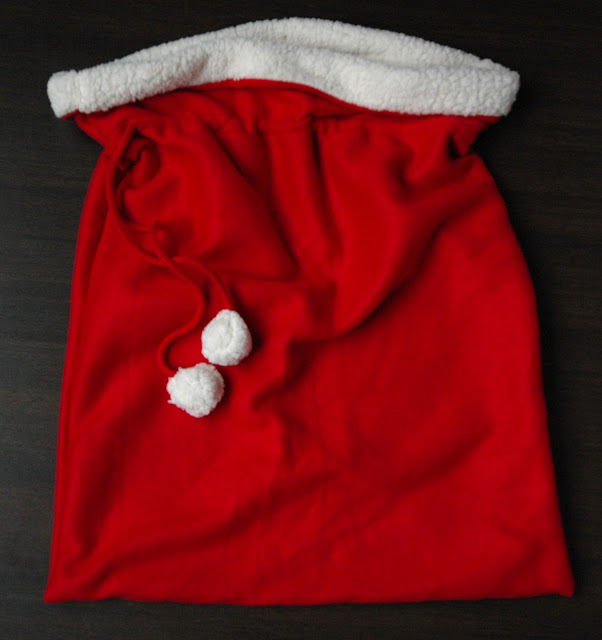 And here’s a not-to-scale graphic of our pieces to make the bag: 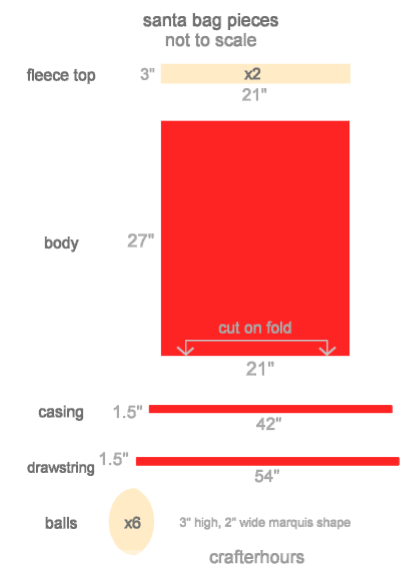 One yard of red fleece is more than enough, and whatever the smallest cut your shop will allow of the fuzzy fleece will work– really all you need is one 3″ cut from the bolt!

Since the body of the bag is cut on the fold and doesn’t need to be stitched, we’ll start by stitching the sides closed. A 1/2″ seam allowance works well. Use a slight zig zag or stretch stitch (looks like a lightning bolt) to give your seams a little stretchability in case kids decide to climb in it themselves so that a friend can slide them around in the bag. Just sayin’, that might happen. And you don’t want those side seams to snap and spoil the fun. No worries about finishing the edges– fleece doesn’t fray. 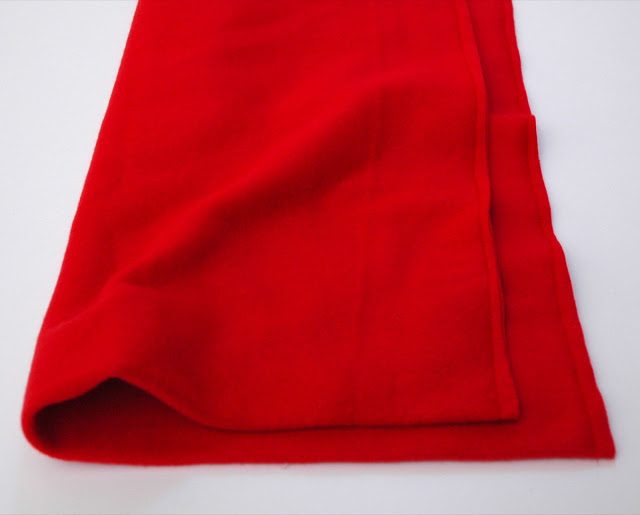 At about 5″ in from the top edge, pin your casing onto the inside of your bag. Stitch all the way around on the top and bottom edge so that you’ve got a channel to thread your drawstring through later. 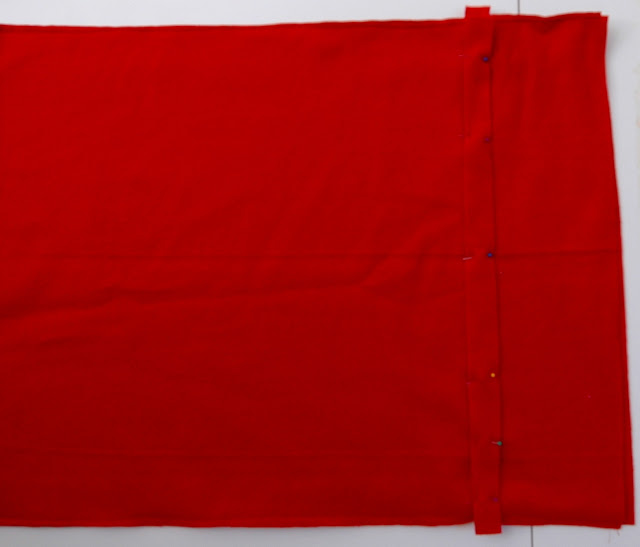 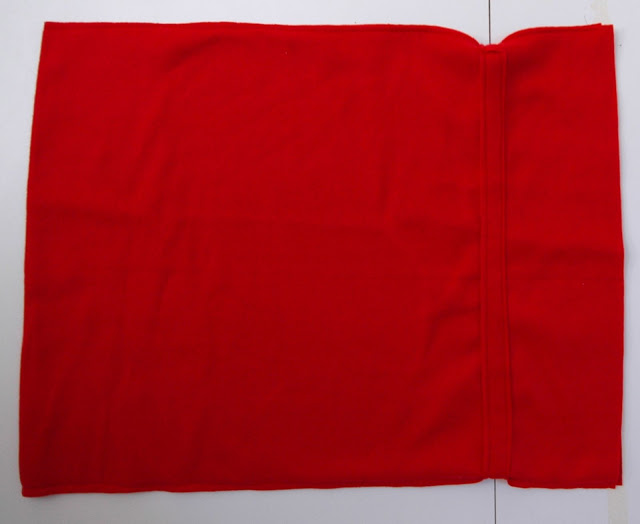 You can flip your bag right side out and put it aside for a minute. Now grab your drawstring and fold it in half. I used a pin to get it started under the presser foot, but you may or not want to bother to pin it all the way down. I tend to avoid pins when possible. Whichever way you do it, stitch all the way down the length of your drawstring with a 1/4″ to 1/2″ stitch allowance. You want to leave enough room inside the tube to be able to turn it. If you hate tasks like this, you might decide to just stitch it and not bother to turn it. Up to you. Either way, you want to use a stretch stitch here, too, ’cause this will get tugged on a good bit. 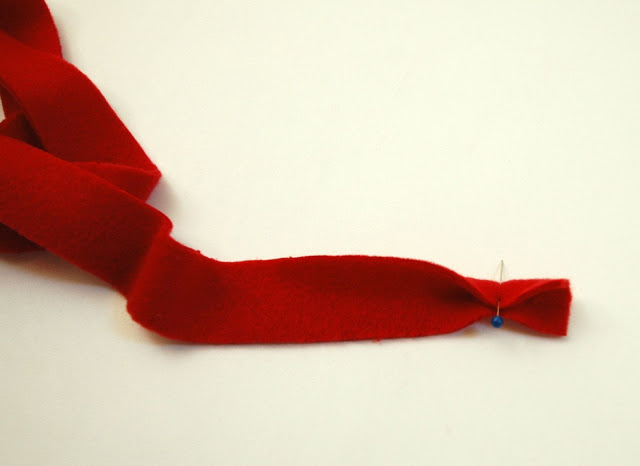 Now I used my ball point threading bodkin to turn this inside-out. Or right-side out, in this case. 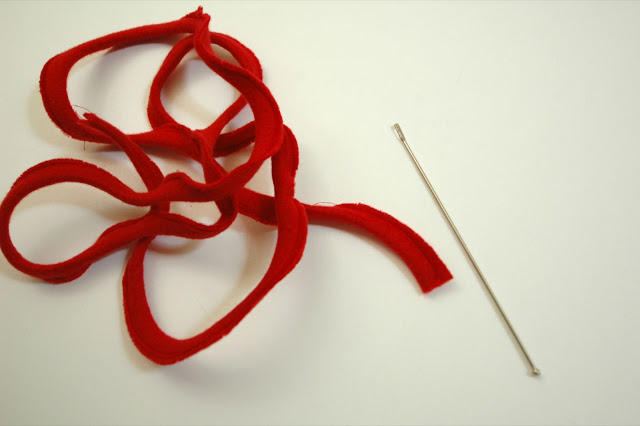 In order to thread the bodkin, I chopped one side of the tube off at the end, slid the bodkin in and…. 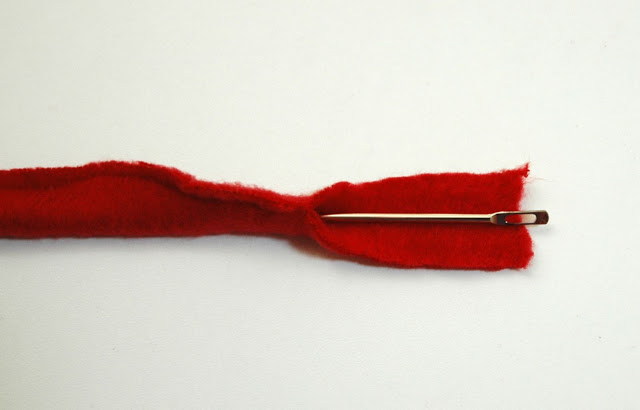 Then fed the end through the eye. And started pulling. You can use a safety pin for this if you don’t have a bodkin. 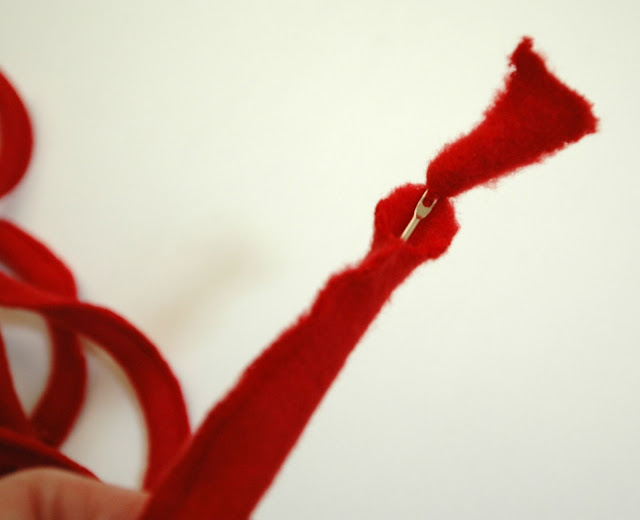 And that gave me this. The turning stretches the fleece, so it’ll end up a bit longer than it was before turning. 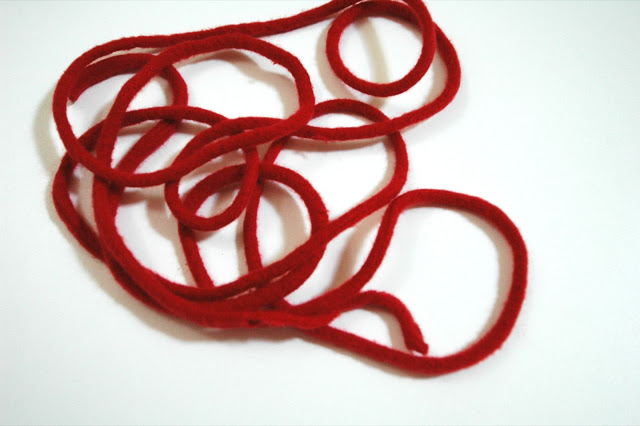 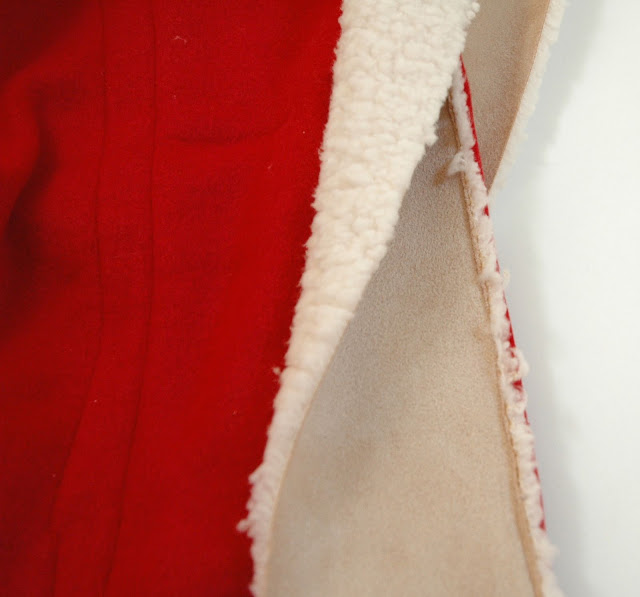 Then flip the fleece into the bag so that you can barely see it from the outside. Pin it. 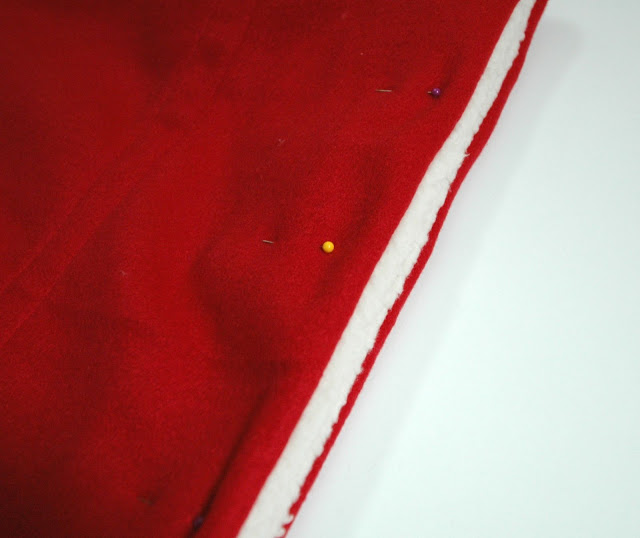 Stitch the bottom edge of the fleece to the bag all the way around. 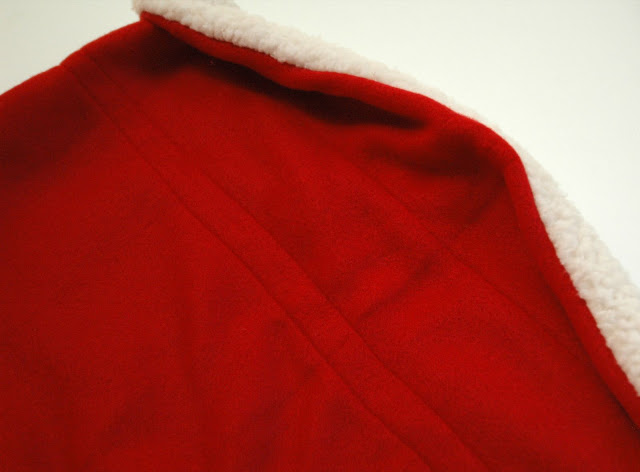 Now fold the fleece portion in half. Half in, half out.  Use a few stitches on each side and a few stitches in the center of each side to tack it down so that it doesn’t fold in. Make a nice, chunky, fuzzy edge. 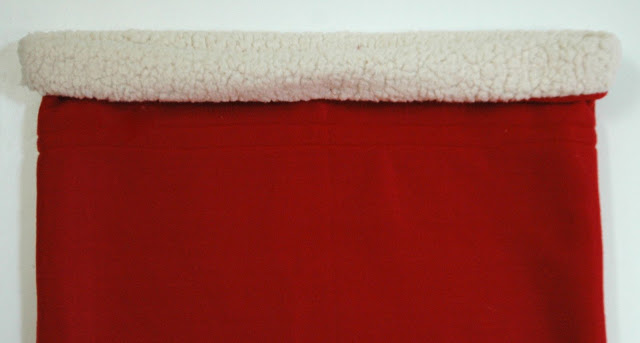 Snip tiny holes in the outside of the bag on one side. One on each side of the side seam, within the lines where you created a casing. Thread the drawstring through. 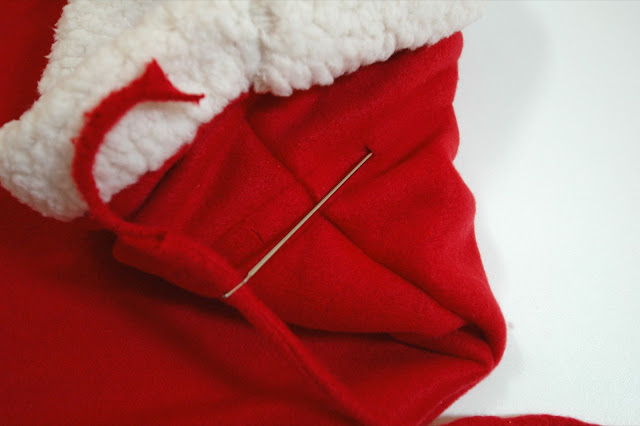 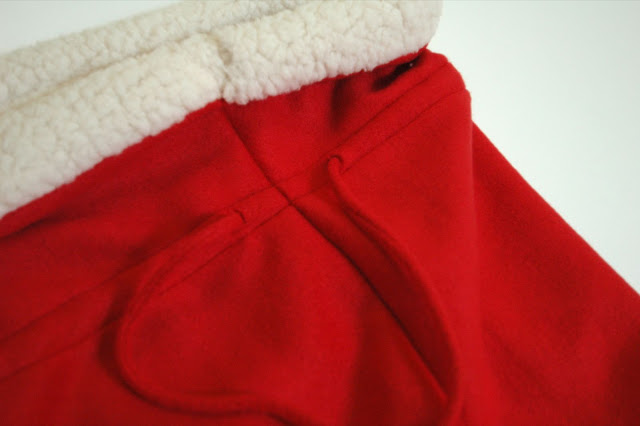 Now it’s time to make those fuzzy balls that hang on each end of the drawstring. We’ve cut 6 marquis shapes, and we’re going to use 3 for each ball. Start by pinning two fleece shapes together, right sides facing. 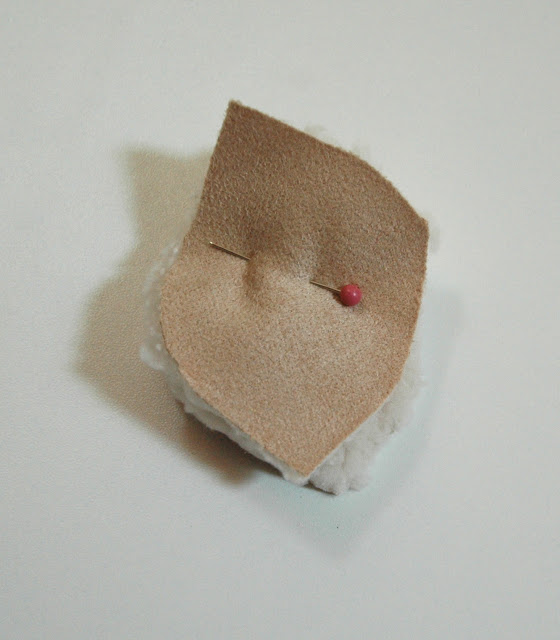 Stitch down one side. 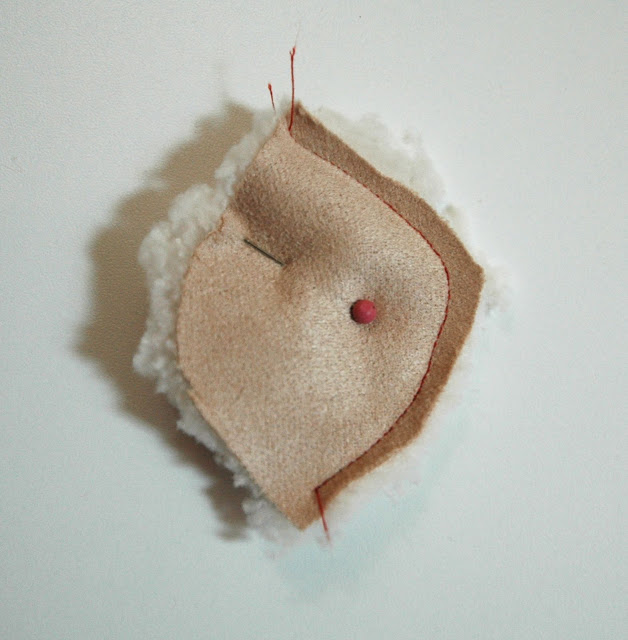 Fold one of the shapes to the side to make room to attach the third piece the same way. 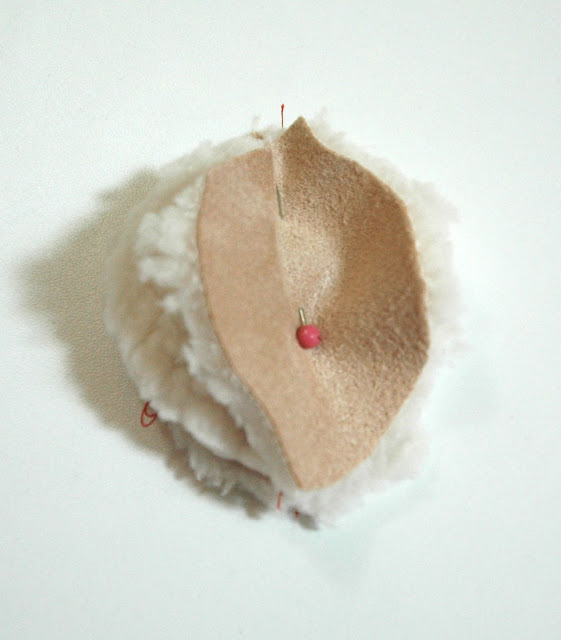 Now you’ve got one side left to close up. Sew this one half way. 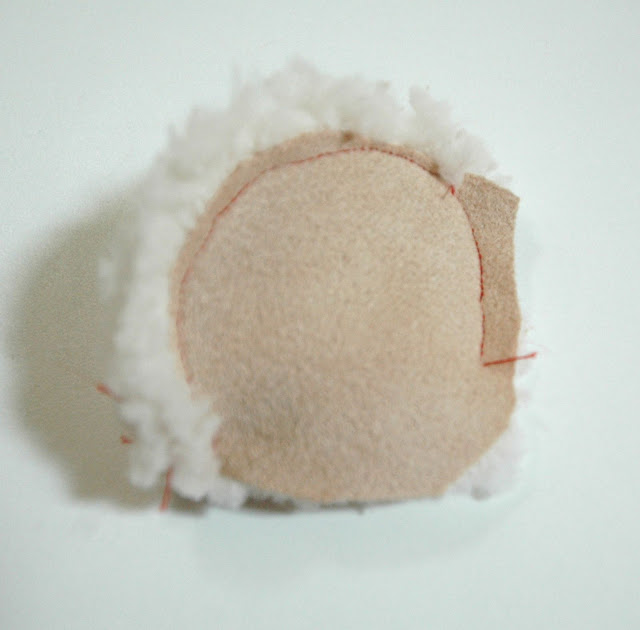 Now you can turn it fuzzy side out and fill it with scraps or fluffy filler stuff. After stuffing, tack the end of the drawstring to the edge, then turn the edges of the fleece in and hand stitch it closed. No stress– the fleecy texture is very helpful in hiding stitches. Make ’em sturdy stitches to avoid Santa bag castration later on. (I’ve waited a long time to have a reason to reference castration on a crafty blog. What an exciting day!) 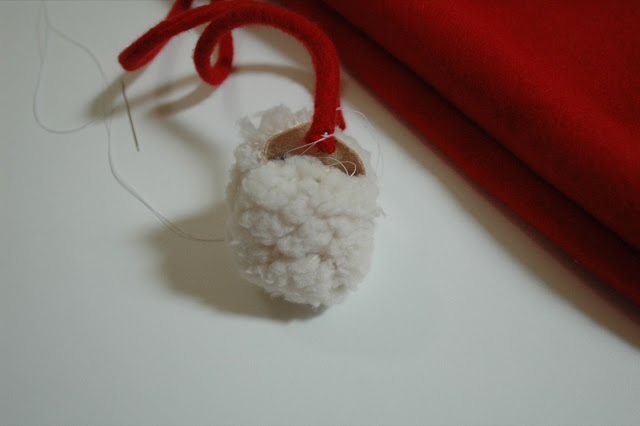 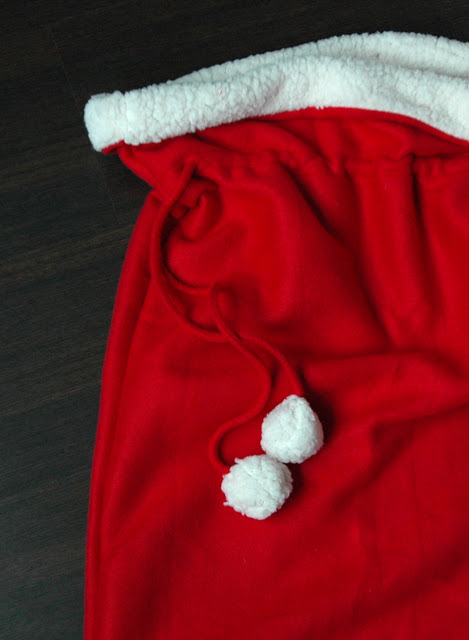 « Giving Much Thanks
Holiday Notes »