I thought I’d take a couple posts to show you the (very very few) things I made for baby girl #3.  Although, I must say that it’s more than I made in preparation for the other two.  My “preparing for baby” story kind of reads backwards compared to what you would expect.  For girl #1, I was of the mindset: they didn’t have any of this crap when I was born, so I certainly don’t need it now.  We got all the basics at garage sales and on craigslist.  By the time girl #2 came along, I had been hanging out with other moms for awhile and saw all the nifty products out there I had been missing out on.  So we splurged on a couple of fun extras, including an Ergo (after borrowing Susan’s and not wanting to give it back).  It’s an item I could. not. live. without.  (well, obviously I could, and did with #1, but after experiencing it, I couldn’t imagine not having it.)
Girl #3 didn’t get any new gear, but she got some handmade by mommy stuff, which neither of the other girls received.  It’s just because she’s my favorite.
First up, a carseat cover, since the original one was so grody at this point that you couldn’t tell what color it was supposed to be. 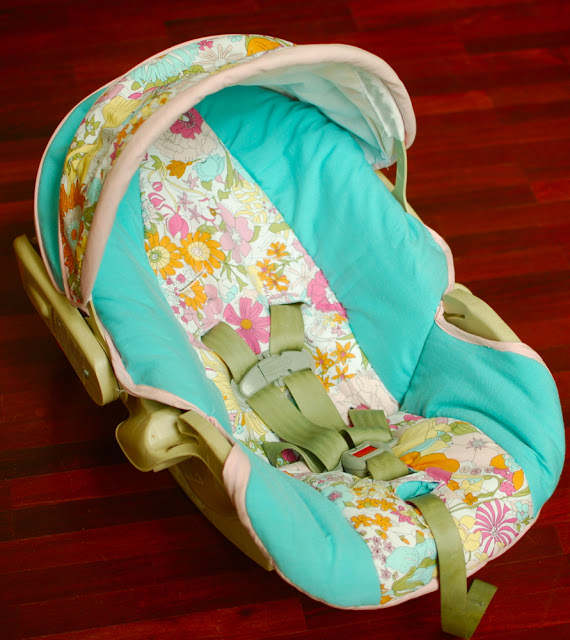 In a very un-Adrianna-like move, I actually used a tutorial to make this.  Usually I spend days and weeks reinventing the wheel, tearing my hair out, and generally subjecting my family to whining and grumpiness when I can’t figure something out.  This time, I did a quick google search and found a perfectly documented procedural from Ashley at Make it and Love it.  My carseat was shaped slightly differently, but the tutorial worked great anyway.  I recommend it, for those of you who are smart enough to seek help without needless tears and gnashing of teeth first. 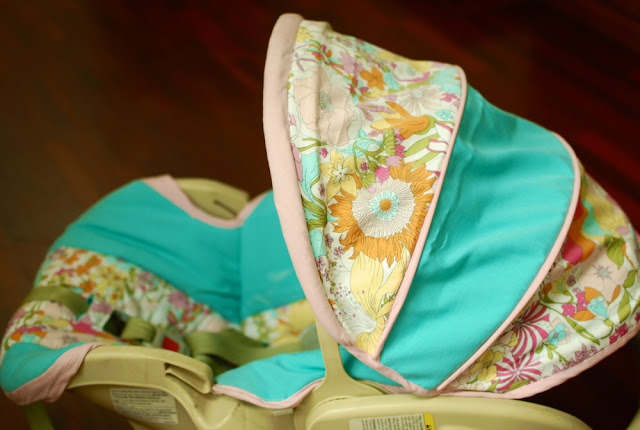 My favorite part is the shade.  I love how professional everything looks with just a little bit of piping.  (note to self: use piping more often.)  This isn’t actually piping, but the casing that holds the plastic arc.  Same diff. 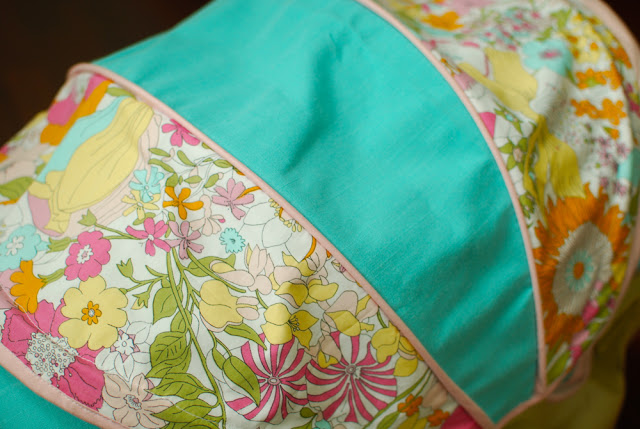 The more observant readers may recognize this fabric as a Liberty print, and you’d be right.  When Liberty did their line for Target, I bought this flat sheet just to use for the fabric.  I thought this was the perfect project to show it off.  The light teal is a linen/cotton blend.  Baby girl isn’t talking in full sentences yet, but you can just tell from the smug look on her face and her calm demeanor whenever we strap her in that she knows she’s the only baby rocking a custom Liberty seat.
And, of course, the seat looks even better with a baby in it.  Yeah, it’s 88 degrees F here, and we’re at the pool.  Don’t hate. 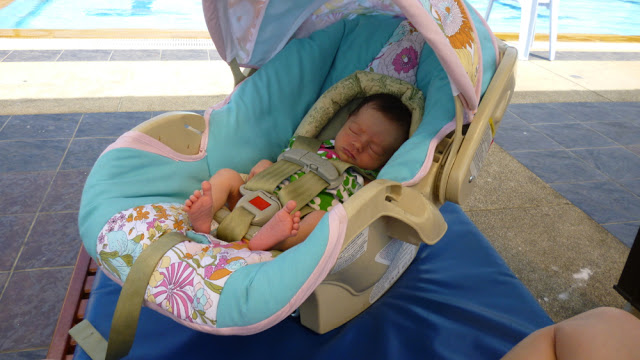 (No, I didn’t take the time to cover the head-keeper-inner part.  They only use it for such a very short time.  Plus I’m lazy.)

If you are thinking of redoing your carseat cover, I say go for it!  It took some time, but was generally much easier than I expected.  Just take lots of pictures before you tear apart the old cover, and I would strongly recommend store-bought bias tape.  The only imperfections on mine are because of my wonky hand-made tape.  It just wouldn’t wrap all the way around the bulk of some of those 4 layer seam allowances.

« Leaping From Hot Tub to Polar Bear Swim
What I made for #3: Knit Blanket »