I think I’ve been back from the Altitude Design Summit long enough to finally write about it. And it’s so lengthy, I’m going to post it in two parts.

I’m not one who can write while I’m still overwhelmed with the moment. And after I came home, the moment lingered. I’m not sure where to start in trying to tell you about it, but I’ll get over my indecision and just start somewhere.

I can start by saying that I was totally unsure that I should be there in the first place. I’m a lover of design, and I even graduated with a degree that says I know something about it, but as a crafterhours blogger, design isn’t always first on the list. It’s part of it, but our blog is about what we make for ourselves, our kids and our homes. We try to make it a bit funny and to keep things real. Or at least real-ish. And real-ish sometimes seems to whack the design on the head. Often we’re just trying to finish and share the post and get back to the kids before one of them is whacking the other on the head. That’s just the way it is. It’s what works for us. And I’d made the commitment to go. It was time to dig in.

Stepping out of my mom world for a few days and into design conference world was intimidating. Both because I knew I’d be surrounded by people who take design so much more seriously, and because of all of the grownup socialization that I don’t do as much of anymore. The professional world feels far behind me. I knew going in that I’d be putting on my brave face.

Packing nearly killed me. The delivery of my second child was easier. Most days I’m wearing yoga pants or jeans. Thankfully my everyday jeans are reasonably cute. But still, there’s not a lot of accessorizing. I can do it, I just generally don’t. And Alt is full of cute people and lots and lots of accessories. So I took some deep breaths. And dug through my closets. Found a few things at my favorite thrift store and made a last-minute trip to TJ Maxx. Some last-second messages back and forth with Natasha who pointed out that I needed something cocktail party-ish. I’d totally missed that memo. Oops. No pressure.

I set my alarm for 4:45. I was completely freaked about the possibility of sleeping through the alarm, so instead of really sleeping I woke up every hour and looked at the clock. At about 4:15 I just gave up and got up. Another moment of panic as I closed the front door at 4:45 am. Since I’d given my house key to my saint of a mother-in-law the night before, if I’d forgotten anything, I’d be locked out. More deep breathing. And I hit the road.

Once Natasha and I met at the Delta check-in counter I started to chill. We ate breakfast and were so busy talking that we leapt up and started running just as they started calling out our last names and were ready to close the door. Oops. But a good sign for the trip– we had lots to talk about.

We arrived at the Grand America in style. Checked things out. Signed in. Were generally floored by the opportunity to spend a few days there and without obligations to children. I wrote a post to celebrate that we’d arrived. We dug through our boxes of swag. I ironed most of the wrinkles out of my clothes so I’d be ready to go for the week. ‘Cause that calms me down, knowing that I can be ready to be glamourous at a *moment’s notice*.

And then it began. The first stop for me was a dinner at The New Yorker. By the time dinner even began the lack of sleep was catching up to me, but it was well worth the effort to muscle through. We had our own little room at the back of the restaurant and a table full of amazing bloggers. The dinner was hosted by SquareSpace and the food and conversation were amazing. 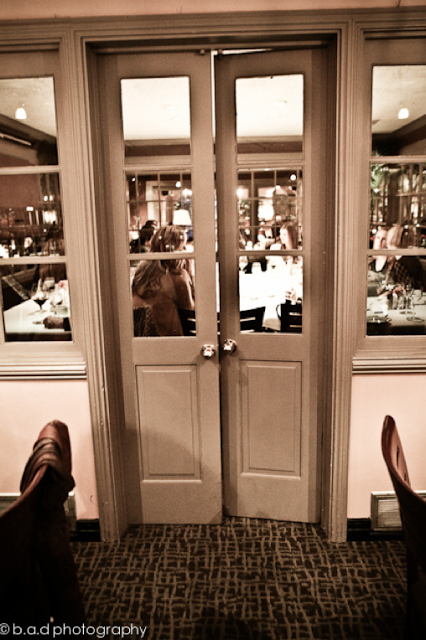 We talked about our individual areas of blogging, but also blogging in general. If you’re a blogger and don’t have other bloggers in your daily life, it’s soooo nice to be able to geek out on the opportunities and challenges of it. One of the people at the table was Jen Pinkston who has recently started blogging at The Effortless Chic. I had such a good time talking to her– although I think in this particular shot we were talking about pretending to talk about something wildly interesting. I won’t speak for Jen, but I know I am more comfortable on the other side of the camera. But I’ll point out that I felt like A was with me in spirit, since I was wearing a Missoni-ish wrap that she gave me for my birthday 2 years ago. 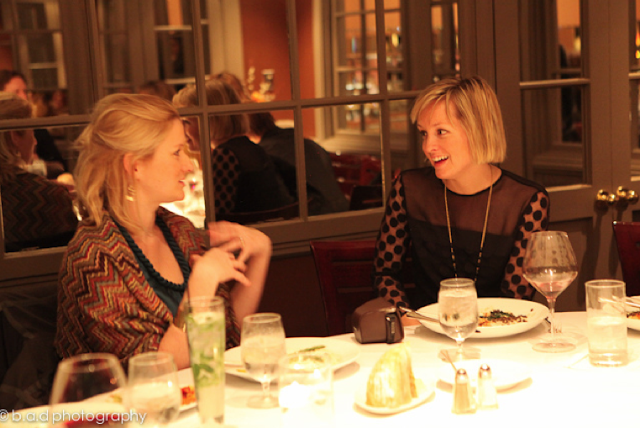 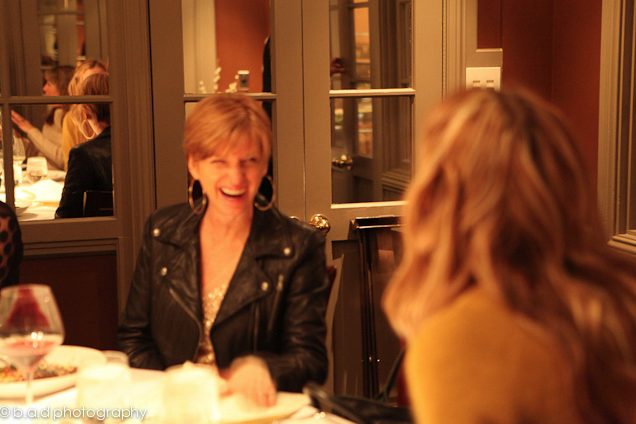 via
As I left dinner I felt a bit like I was floating. The conference’s technical start wasn’t until the following morning, and I’d already heard and seen enough to feel like I could go home happy. The fatigue overwhelmed the creative jolt, thankfully, and I crashed. Hard.
The next morning I set out to my first session. My hair was 400% cuter than on the average day. 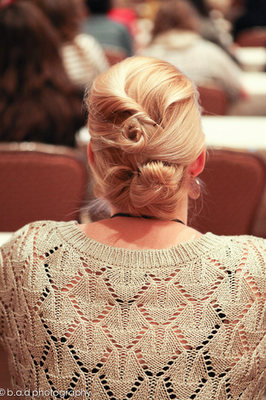 via
The title was The Business of Blogging, but I’d say the content was mostly about advertising. In the middle of the session, looking around, I realized that Amy Butler was in the audience. I knew she’d be at the conference, but I had no idea she’d be sitting about 14 seats away from me. Later, in the Flickr stream, I immediately picked out her bag. 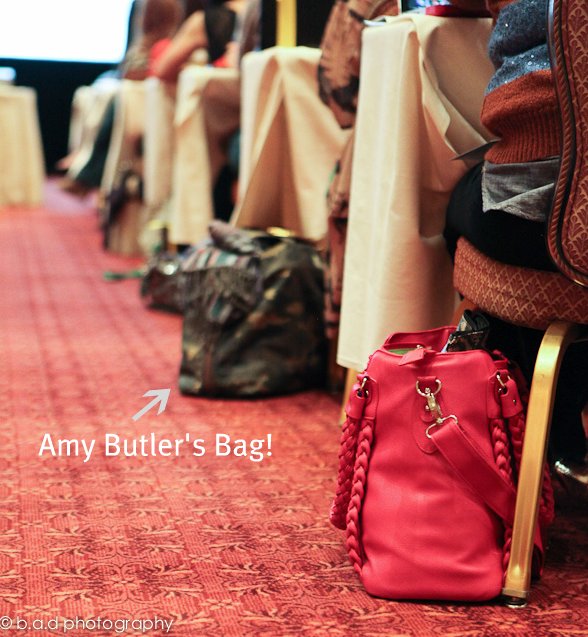 After the session was over, I took a big. deep. breath. I have a problem when it comes to talking to celebrities. I just don’t often have much to say other than “I think you’re awesome”. Don’t they hear that 47,435 times? Aren’t they bored with that? Don’t they want to hear something more interesting? But I figure they’re happy to hear that over silence, even though I feel completely un-original saying it. Because I do think she’s awesome, and back in the day I’d stopped sewing much because I didn’t like the fabrics available. The arrival of Etsy (searching under “supplies” for “fabric” was so simple and yet so transformative, thanks A!)  into my life changed everything, and hers was one of the first lines of fabric I found to love. So I went over to meet her. And she was so, so so nice. I was so glad I did. We took a few photos, and she posted this one on her Facebook page: 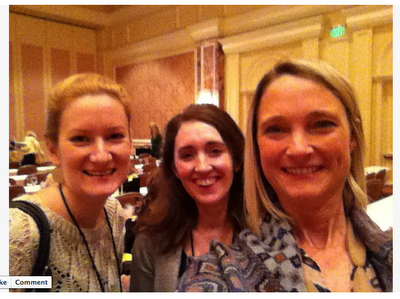 We talked briefly about creativity, saying no to the things that don’t energize you, and what her life is like in relatively-remote Ohio. So, if Wednesday night hadn’t been enough for me, by 10:30 on Thursday morning I was done. Amy Butler and I were BFF. I could pack up and go home. Bucket List complete.

But since my return ticket was set for Sunday, I plodded onward.

The lunch keynote speakers on Thursday were from Martha Stewart Living, The Wall Street Journal and Apartment Therapy. Natasha was making googley eyes at Max since she’d just been featured on Apartment Therapy. The topic was the Relationship Between New and Traditional Media, and for me, the takeaway was pretty much what I expected. While they tried to smile even as they admitted it, traditional media is struggling to find their new normal in terms of who can survive the turn to new media. We all love the printed page, just not enough to keep paying for so much of it when we can download or otherwise view digitally. What was more exciting for me about the lunch session was getting to know my seatmates, Alma and Mike from Ollibird. 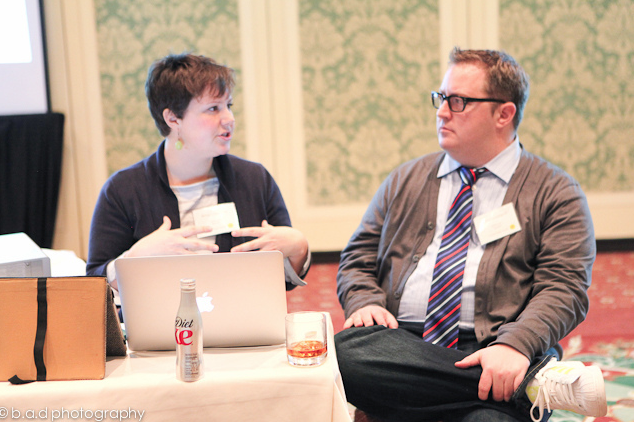 Not only are they a lot of fun to talk to, and I’d read some about them prior to the conference, but they teach online classes in Illustrator and Photoshop, which is EXACTLY what I need right now. Since coming home I’ve signed up for three classes. I can’t wait to dig in. Review of my “homework” for the classes will be so good for me, since it’s been a decade since my last digital design class.

That afternoon I went to a session all about going from blog to book authoring, which isn’t on my immediate to-do list but was interesting to consider for later, and then on one called “Kickstarting Your Next Project.” 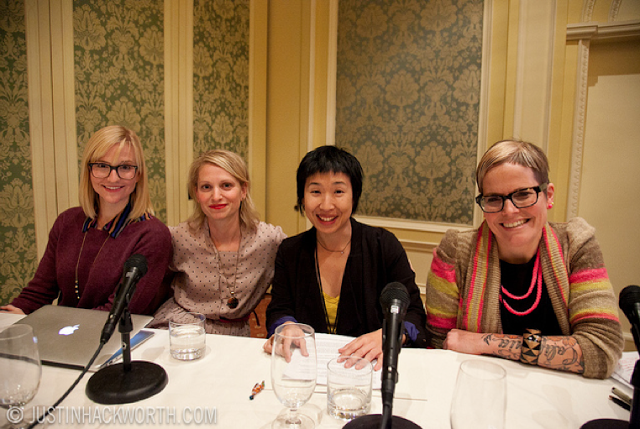 That session brought on a storm of creative thoughts. Not that I had the brainpower left to fully think them through, but I have notes that will keep me working for the rest of 2012. I’m hoping to hook up with Rena Tom online, who discussed her “Office Hours” as a tool for creative collaboration and consulting. She does it for FREE. Okay, she accepts payment under the “micro-payment” model but I’m inclined to think that I’ll want to hand over mortgage money by the time we were done talking, because her perspective would be so valuable to me. (Haven’t tried to sell that one to my husband yet, but my appointment isn’t until March 20, so I have some time.)

After this session I had to retreat to my room to collect my few, pitiful surviving thoughts that were being drowned in a sea of amazingness so heavy at that point that I could’ve cried. My little mostly introvert self was soooo tiiiiired. But after consulting with my roommate, I steeled up enough energy to dress up for the White Party. At this point it was really, really great that I’d taken the time to iron and line up my clothes, because if I had had to think about what to wear AT ALL I’d have melted down.

When the schedule had specified that this night’s theme meant that we were all to wear white, I struggled. I don’t have much white for winter. But all of the effort everyone put into finding some whitewear made for quite the scene:

And Natasha and I made our best effort. Although truthfully, we lasted about 45 minutes. We both needed to recharge. I’m posting this one nice and small. ‘Cause I think I look as tired as I felt. And this is the only time you’ll ever see me wearing white pants. Ever. 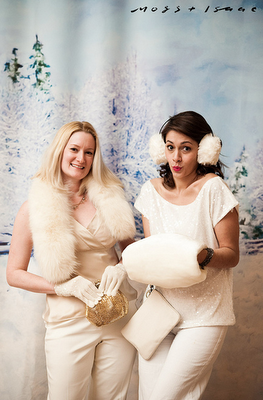 Having just relived the bulk of Wednesday and Thursday in the process of writing this post, I need a nap now. More tomorrow. And if you’re not totally bored by this post, or have a question, please tell/ask. I won’t lie, that’d pep me up to finish part II.

Alt has just announced their lineup of classes on the Alt Channel. It’s superawesomelyamazing that it’s available to everyone easily from wherever you are, and that you can pick and choose what’s most relevant to you. You can also, if you’re reeeeally interested, see exactly what the 2012 conference schedule included here.
Other Alt posts I love:
Alt hair
What I should have packed
And then… there’s a complete Link List

« I Spy Spoonflower Assortment: Alloy
Worth Every Bit of Effort: Alt, Part II »