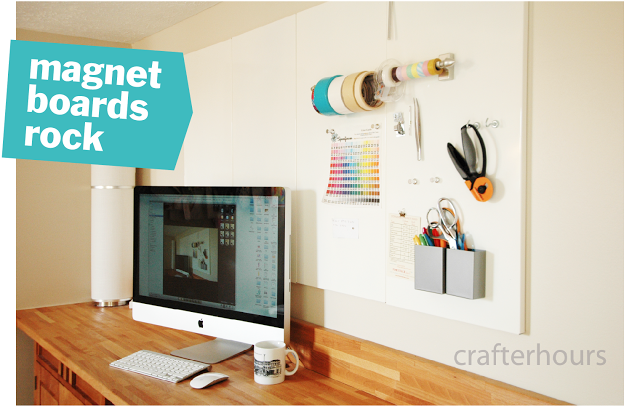 This is my desk. Well, my desk when I’ve just taken 95% of the random accumulated stuff and put it off-camera. The giant screen is definitely one reason I enjoy this desk. I looooooooove it. I used to do all of my work on a MacBook, and while I still use it and still <3 it, the giant screen won me over the second I first turned it on. The part I want to talk about today, though, is the memo board area behind the computer. It’s made of four of these boards from Ikea. The flexibility and simplicity of it has been fantastic.

Let me show you what I’ve found to put on the boards that help me so much.

First, there’s these classic magnetic bulldog clips. Nothing new here, right? But they’re helpful. And you might recognize that baby. 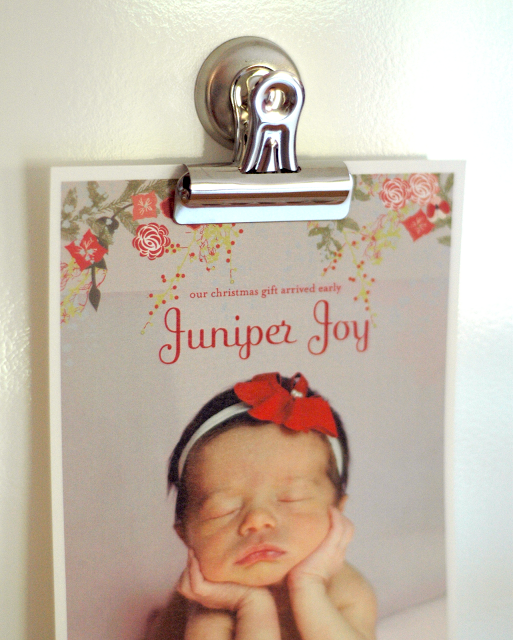 Then there’s these hooks. They’re not made with old-school magnets, they’re made of the new tiny super-strong ones. They can hold up to 12 lbs, the package says. I don’t doubt it. The heaviest thing I’ve put on them are my fabric scissors. Well, I also use one elsewhere to hold two point and shoot cameras by their wrist straps. No sliding. 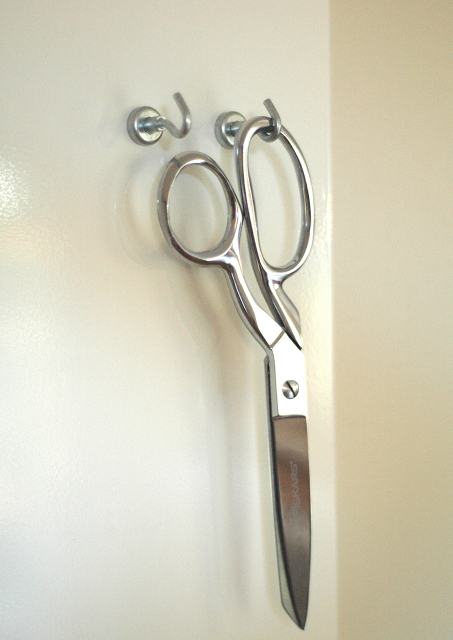 These little pushpin shaped magnets came from a chain store. $5 for 12. Also quite strong, though not strong enough for the heavy scissors. For the lighter scissors, no problemo. 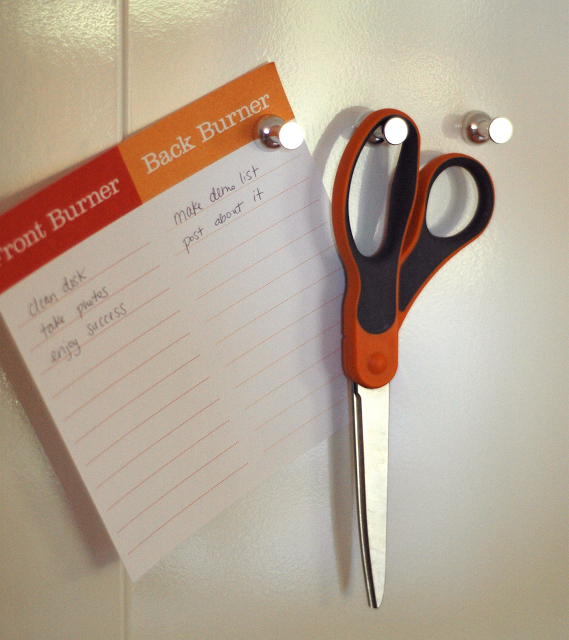 These pencil cups used to be sold at Ikea but aren’t anymore. Bummer. The good news is that you can find similar ones typically made to go on your fridge, or, if you’re ready to DIY, use vintage tins and E6000 to glue some of the super strong magnets to the back. Lots of options for making your own version. 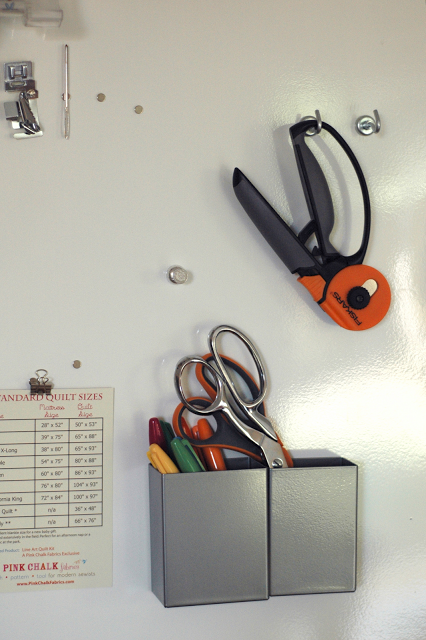 I like to use the neodymium magnets all by their little selves to hold up papers. But adding a binder clip works well too. The middle of a binder clip is metal as are the wire-y parts, so for groups of things I want to keep together but still grab easily, I use those. (Note– you probably already know this, but I’ll say it anyway. Those super small magnets are super dangerous around small kids. They’re not toys. Believe me, I keep an eye on my kids when they get anywhere near this wall. For lots of reasons.) 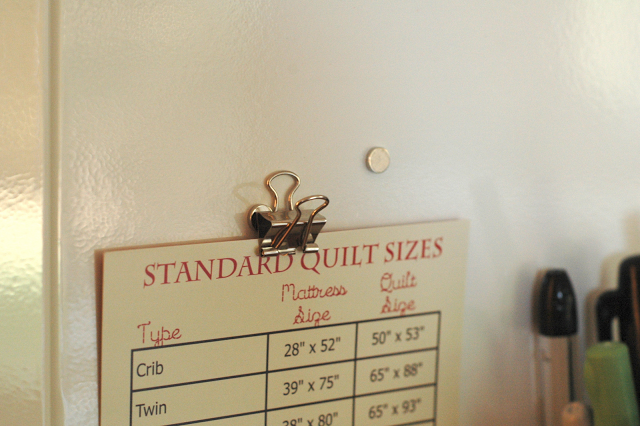 Another one of those reasons is this. I keep it waaaaay at the top if I need it at-hand. Otherwise it’s out of sight.

My most recent addition is the magnetic cafe curtain rod at the top. Fantastic for tape. 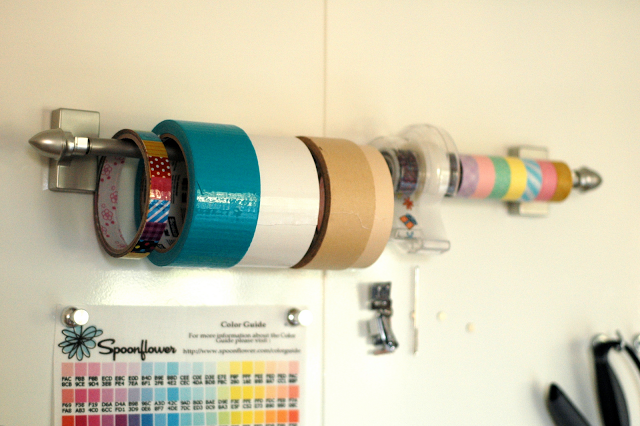 I have another of the boards in my sewing area. I don’t know about you, but when I look at my sewing gear, a whole lot of it is metal. I put the presser feet that aren’t in use, scissors, needles, bodkins, serger tweezers and my bias tape makers all up where they’re easy to grab and easy to put away. Hooks hold notions and supplies that are on-deck, so to speak, for the projects I’m working on. Clips hold pattern pieces and keep them grouped. More magnetic cups hold air-erase pens, fabric markers, a tracing wheel and other scissors. Another magnetic cafe curtain rod to hold hem tape, ribbon and trim. Here’s the presser foot family reunited: 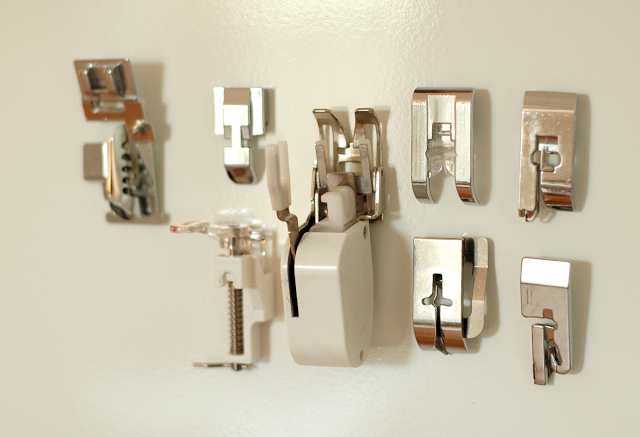 And the bias tape making family at rest: 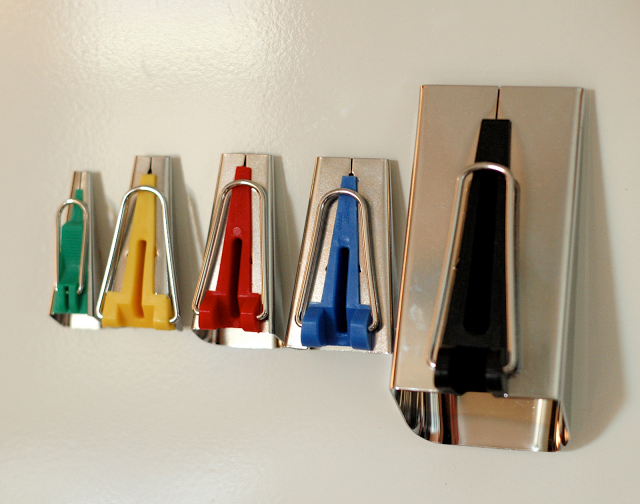 I’ve been meaning to blog about the wall since I first put the panels up, but when Natasha was over the other day I realized that it would be a double-win if it made me clear out some of the clutter that I wasn’t actively using in order to take a few pictures.

Last but not least, you may be thinking “yeah, Susan, that’s awesome, but the nearest Ikea is 4,272 miles from here”. WAIT! I have an idea for you too. Try a shelf panel from one of these. I don’t have that kind in particular, but a while back I decided I needed a skinny panel for one particular wall in my kitchen. I went to the hardware store and found a single panel. If you can’t find them as singles, maybe you can salvage steel shelving to use the panels on a wall? Here’s mine. There’re just those little holes at the top and bottom that are visible, and they don’t bother me. If they don’t work for you, or if the color of the finish isn’t your thing, there’s always contact paper, spray paint, fabric, ribbon, dimmer light bulbs, etc. 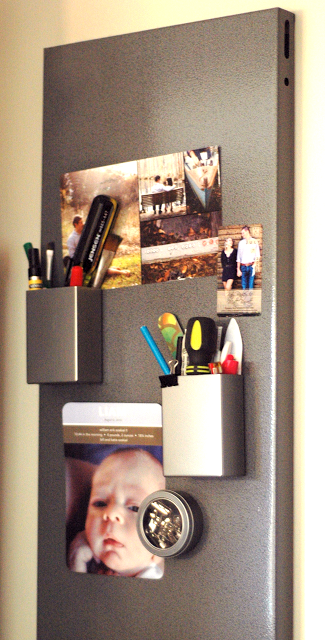 So finally I’ve shared my wall with the world. If you want to see how it really looks any other day, you’ll have to come over. Call first, though, so that I can give you the directions that take you by my favorite takeout place on the way. I’ve been too busy rearranging my wall to cook much.