First thing tomorrow morning. But first… its that time during the Oscars when the Academy president comes out with some boring legalese.

In this, the third year of Skirt Week, we really must thank the judges. Adrianna and Susan are particularly grateful, because their own roles as judges of the very first Skirt Week (which was way bigger in the end than we ever though it’d be!) almost killed them both. It sounds dramatic, but it’s gut-wrenching. This year, from the 17 judges, we heard that about 17 times; “Wow, that was so much harder than I thought I would be!” Yes, exactly why we chickened out and have no plans to waddle back. (Do chickens waddle? Really not sure.)

So our Skirt Week finalists were chosen by judges that were neither Susan or Adrianna and were not influenced in any way by Susan and Adrianna (though we had a hard time keeping our mouths shut, ’cause there was one in particular that we both loved that didn’t make the top 10 for its category).  3 to 4 judges reviewed each category and ranked their top 5 favorites.  These skirts were each given a 1-5 score for each criteria (wearability, craftsmanship, overall appeal, fit) which was added up to a final score for that skirt.  Then those final scores were added up from all of the judges and the one with the highest score won judges’ choice.  Fair enough?
The top 10 skirts from each category also made up the pool of skirts for reader’s choice.  The skirt with the most votes won readers’ choice.  Pretty straightforward.
Ok, now back to the fun, glittery, brangelina part: Let’s meet these judges! (Also a fun game if you’re a big-time crafty blog reader– how many can you name from the photos?) If you don’t already have these fun folks in your blog reader, we heartily suggest adding them. A few are also previous winners of Skirt Week. 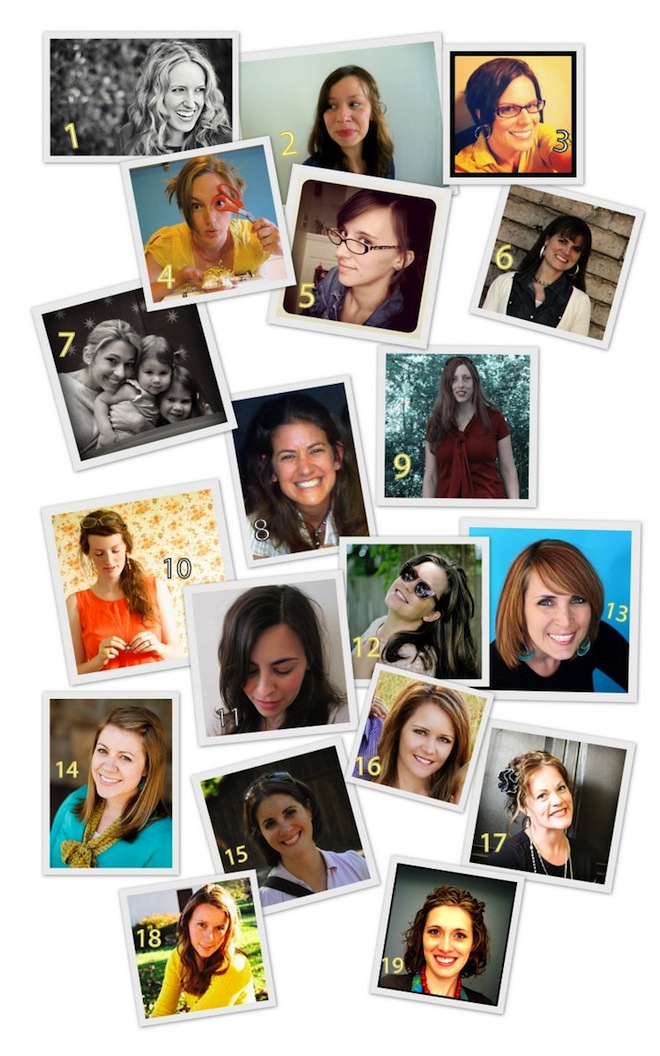 1: Ashley of Lil Blue Boo  2: Meg of Elsie Marley  3: Amy of Mod Podge Rocks and 12 other sites  4: Rae of Made by Rae  5: Michael Ann of Michael Ann Made  6: Sabra of Sew A Straight Line  7: Natasha of Little Pink Monster  8: Jen of Upcycled Education  9: Kim of Crafty NH Mom  10:  Disney of Ruffles and Stuff  11: Florence of Flossie Teacakes  12: Jessica of Happy Together  13: Mandy of Sugar Bee Crafts  14: Jess of Craftiness Is Not Optional  15: Stacey of Boy, Oh Boy, Oh Boy  16: Susan of Living With Punks  17: Janica of JaniJo  18: Anna of Noodlehead  19: Jessica of Running With Scissors
Thank you so much to these bloggers for lending us a piece of themselves in their decision making. Please skip around and meet them if you haven’t, and say thanks too. It takes a lot of people’s involvement (including yours!) to make Skirt Week happen!
See you in the AM for A-Line winners and the Full skirt finalists!