Last year I made a trip to NYC with husband and kids with no intention of making fabric shopping a priority, and thus, had done no advance research. When I realized that I’d fallen into the garment district’s lap, I did some quick googling from my phone and visited three shops – Mood, B & J and M & J. All three were fantastic.

This year I went with just my husband and while I didn’t want to take a lot of time for fabric, I did do some strategic planning. I made two trips – one shop the first day and five or so the second day. About two hours, total.  Two quick trips do not an expert make, but when I was researching, I wanted more photos of shops than I found. My primary resource was Shop The Garment District as well as this related post with 3 different itineraries.
There was one shop that’s less centrally located that I had to see. Every listing I found for the shop called it Trumart, but the sign above the shop and the sign on the door spell it with an e. Truemart is a short hike from the middle of the fabric district. To a mom of small kids, the “no strollers” sign on the door looks kind of menacing. 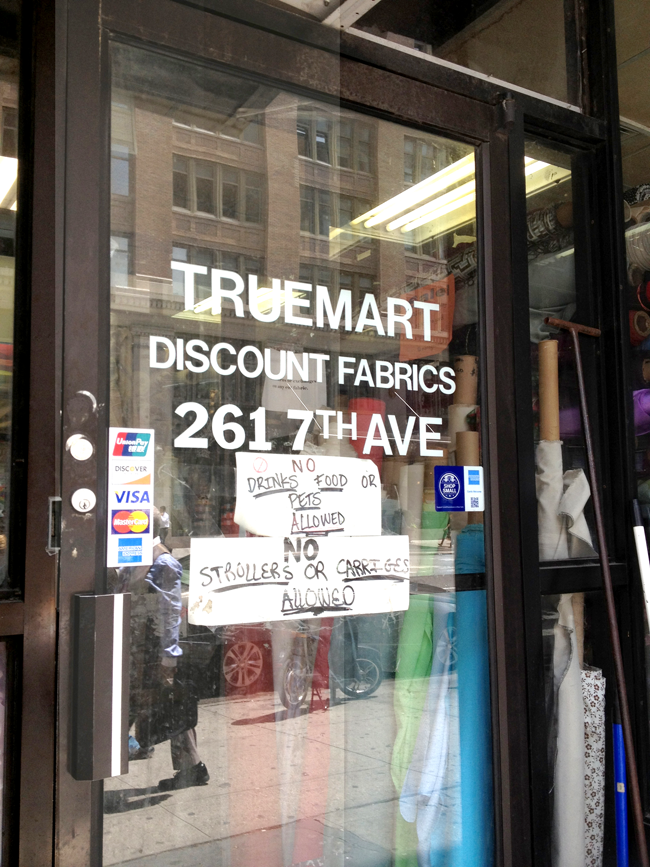 Once inside, it’s clear that whether or not they like kids, there’s really no where to PUT a stroller. It’s an avalanche waiting to happen. The store itself was the size of a small coffee shop. Just one circuit around a center ring. I could have spent longer looking there except that there was a lot that just wasn’t physically accessible. I chose chambrays in pink, red and grey. The guys used a yardstick to measure and then– Tore the fabric to length. I can’t stand that tearing sound. But I wasn’t going to argue. I was way out of my comfort zone as it was, and THEN… … wasn’t expecting negotiation. A lot of fabrics’ prices weren’t marked, so the conversation would go something like this:

Their sales strategy worked. For most things, I was happier with more yardage at less per yard. This is the only store I visited that worked that way. They also offered that if I needed more of  something and could send a swatch, they’d send more if they had it. When/if I go back to NYC, this store is on my list for sure. Even though I did worry that these poor sagging metal shelves could set off the avalanche at any second. Just that one store was enough excitement for our arrival day, but the next morning I set out after breakfast to check out the block of West 39th St between 7th and 8th Avenues. The block with the pink line. Before leaving home I’d made myself a quick and dirty map for my phone. ‘Cause I’m a nerd. Everything else in this post is from just that one block. One half of that block, really, because I only spent about 90 minutes. There are just so many stores. For example, Fashions… Fabric. This one was well organized and did not present as many imminent hazards. The signage cracked me up. Look at this word long enough and you won’t remember the right way to spell it anymore either. If I had any go-to ideas for eyelet, this was the place. So many colors! And if only I needed a party dress. This place had that covered. Next I slid into Better Choice Fabrics. Because if I have choices, I’d like the better one, please. This one actually had relatively little fabric, but was floor to ceiling with trims. Holy moly. It made me think I should start making silk tanks with trim just for play dates at the park. Of the few fabrics this store had, I fell in looooove with this middle one. Only $90 a yard. I stuck to a few yards of more affordable things. Like this. I’ll be so cute going to the grocery store! So next there were two stores. I was starting to feel a little numb already. Overloaded. From those two stores I only took this one photo. They’d used rope to keep rolls of fabric from sliding or falling, and I guess over time those ropes have collected all of these random threads. I thought it was beautiful. I think the lady in the store thought I was nuts, but she did joke about charging me $10 for the photo. At least I think it was a joke. I crossed the street (and totally jaywalked too) into another store, G & R Fabric. A lot of wandering around. You really could get lost. And maybe crushed and left for a while before someone decided they needed a few yards of whatever had taken you down. For example, here’s the back room at that store: I told one of the sales guys I like the music in the store– it was something upbeat. It made me a more enthusiastic shopper. He laughed and said his boss would be in soon and would change it. Such nice salespeople here.
There were these pleated panels hanging around in various colors. The guy saw me checking them out and held one up for me. He pointed out that they’re about a yard wide at the top, and about three yards wide at the bottom. I chose one of the pink pleated pieces and the sweet salesguy (Mirza!) helped me find enough matching lining to make a skirt. Considering that everyone who spoke to me asked what I was looking for, or when I was looking at something, what I was planning to make, I gather that most people come in with a plan and maybe a list. I had neither. I was collecting materials to inspire me for the next year or six.
Next up: Daytona Trim. As you walk in the door they had ready-made beaded collars on display. The jacquard ribbon selection was amazing. And all priced by width. 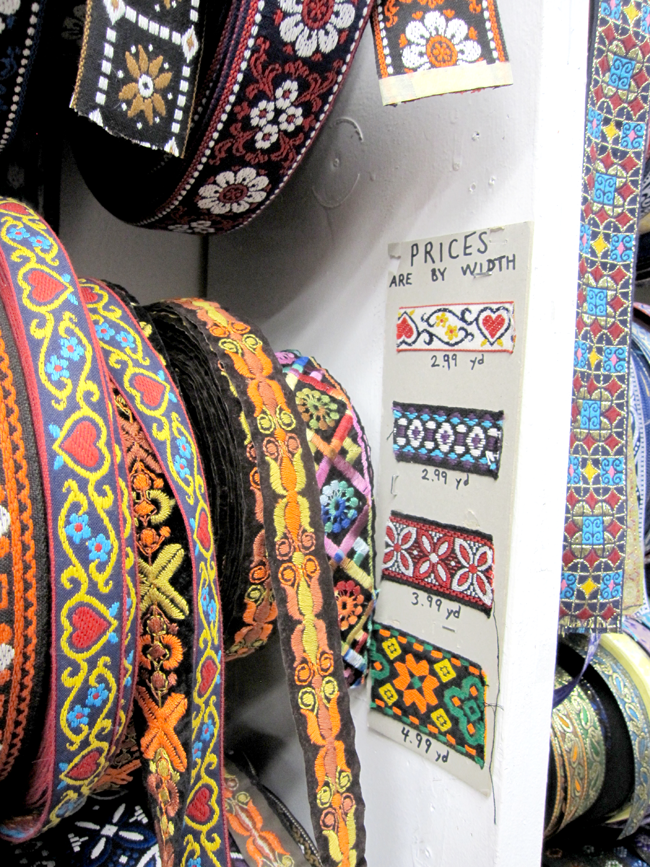 I was fascinated by this zipper. Fascinated in a maybe-if-I-were-a-lady-of-the-night-I’d-have-seen-this-before kind of way. But then I kind of liked it. And then I thought it was trashy. But then I thought maybe if it had just the right outfit? Surely not. But maybe? Absolutely not. Welll…. obviously, I’m conflicted. No, I didn’t buy one. But I’m still confused as to whether I should have. My last stop (after a desperate dash down the street to Starbucks, because none of these stores has a public restroom) was Paron Fabrics. Ahhh, after the stores full of things that threatened to kill me, this one was a breath of fresh air. It reminded me of B & J Fabrics, but wasn’t as large. The black fabric with a bit of tangerine on the cutting table is an ikat! The weight of it is lovely. Bright and orderly. Clearly marked. Lots of designer fabrics and everything had clearly marked fiber content– something most of the other stores didn’t have. I love digging for treasure at the bargain shops, but I can only handle so much processing before my head reaches implosion stage. If there’s a 3rd trip, really, seriously, I need a list. This store was a nice, calm end to my trip. The problem with going to the garment district, for me, is that it only makes me want to go again. I keep thinking I’m going to cross it off my list, and that never happens. And then I found this post – a guided tour is tempting!