I haven’t been this interested in jewelry since I first discovered Claire’s in… 4th grade? I’ve had a few short-lived flings with jewelry-making but none have lasted all that long, for much the same reason that I wasn’t all that interested in sewing until a few years ago– I couldn’t find supplies I was excited about working with. But while I was visiting Adrianna in her parent’s town in July we went for a walk in Winchester’s downtown shopping/dining district and found Potomac Beads.

I didn’t realize until I went looking for a link for this post that there are a bunch of locations— good news for me since that means there are several that are closer than hiking back to see Adrianna’s parents, even though they are super nice and might let me hide out there for a while. :)

So I can’t speak to all of the locations (yet), but this one was most impressive. We were in hang-out mode more than let’s-blog mode, so these photos are just phone pics. Here’s Adrianna contemplating her findings choices.

There are lots of options strung and hanging on the walls, and individual beads and findings available in a long row of tables like this one, in those little cups. And two layers of roll out trays underneath. You could spend a week just looking. 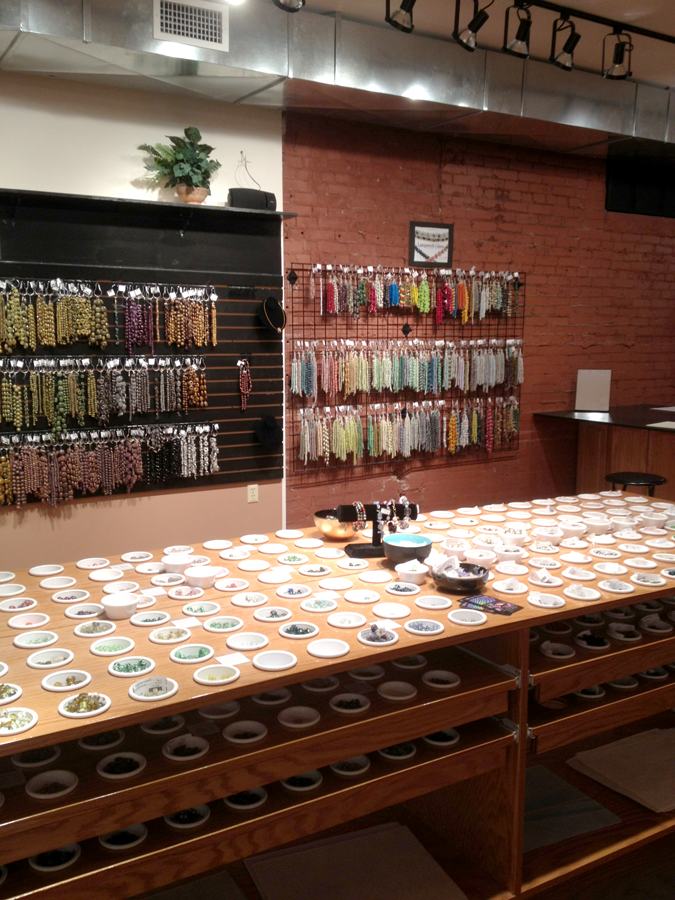 Any sort of craft supply in a rainbow-ish sort of display is a winner to me. Or, um, us. 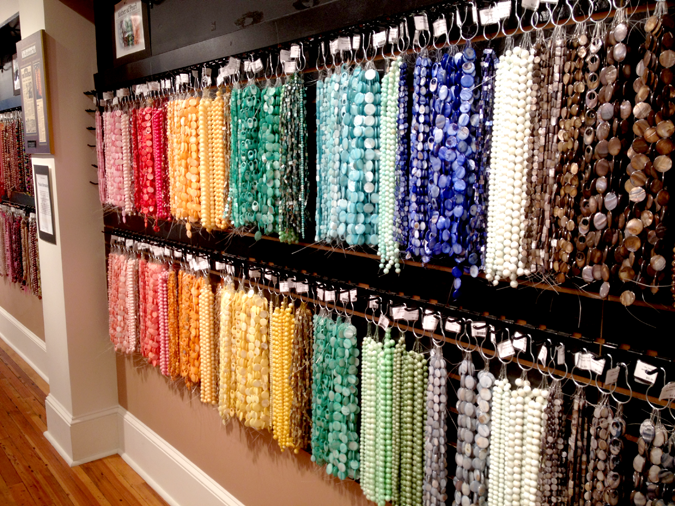 I loved that there were multiple sit-down-and-work stations in the store, and we were happy to run a few doors down to grab coffee and a snack and come back to get to work.

Something that came up in conversation – you wouldn’t know unless someone tells you that beads on strings for sale are “temporarily strung”. You could attempt to use them that way, but whatever it’s strung on isn’t likely to work well for much. Even if you just want them all in a line, you’ve got to re-string them.

I fell in love with these square agate (I think) beads. I was obnoxious about my new love, too. I told Adrianna, who was still shopping: “You can look all over but I already found the coolest beads in the whole store.”  If she didn’t stick her tongue out at me, she should have.

I knew I wanted to make a necklace that was long enough to put over my head– avoiding closures. They had plenty of ’em, I just wanted to keep it simple. 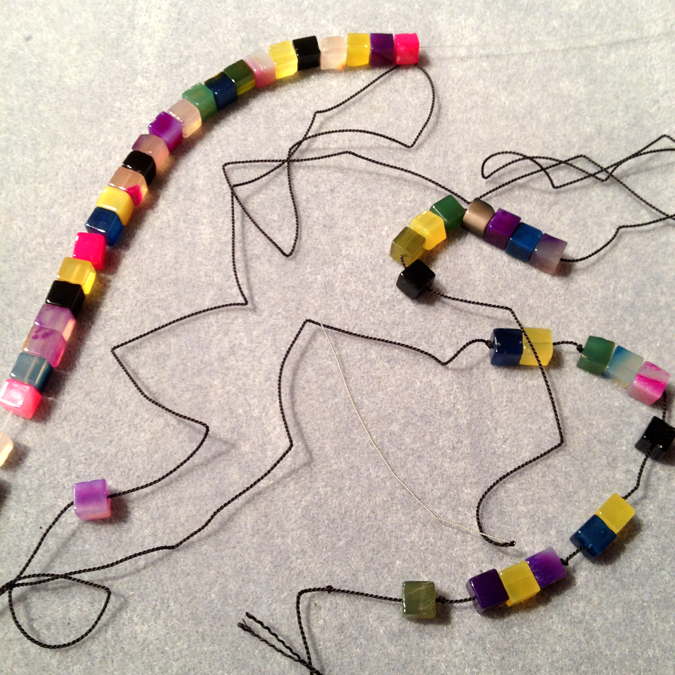 I strung them and knotted in between individual beads and in groups of 2, 3 and 4. So they wiggle around a little, but not much. 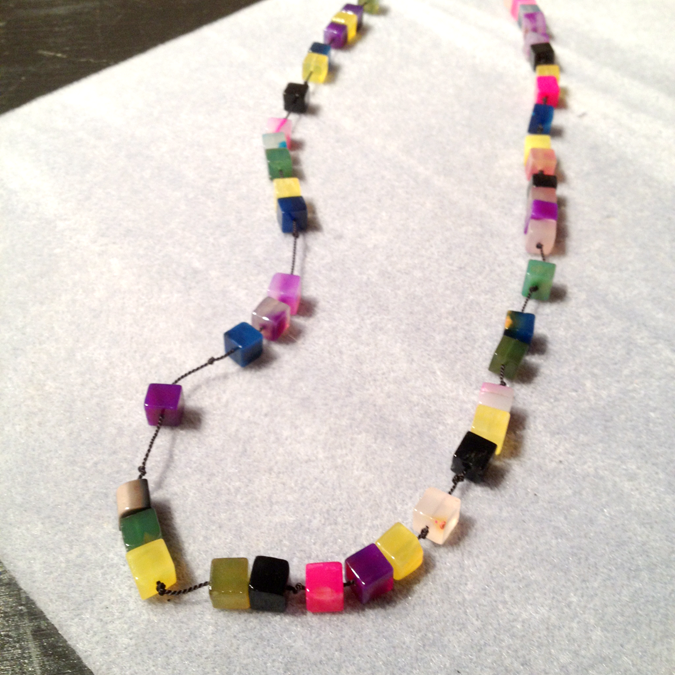 When I had asked the super helpful saleswoman what type of bead cord to use, she took me to a display of these. And I was in looooove. I’ve not seen this at big craft stores, but then again, I wouldn’t have known to look for it until she told me about it. 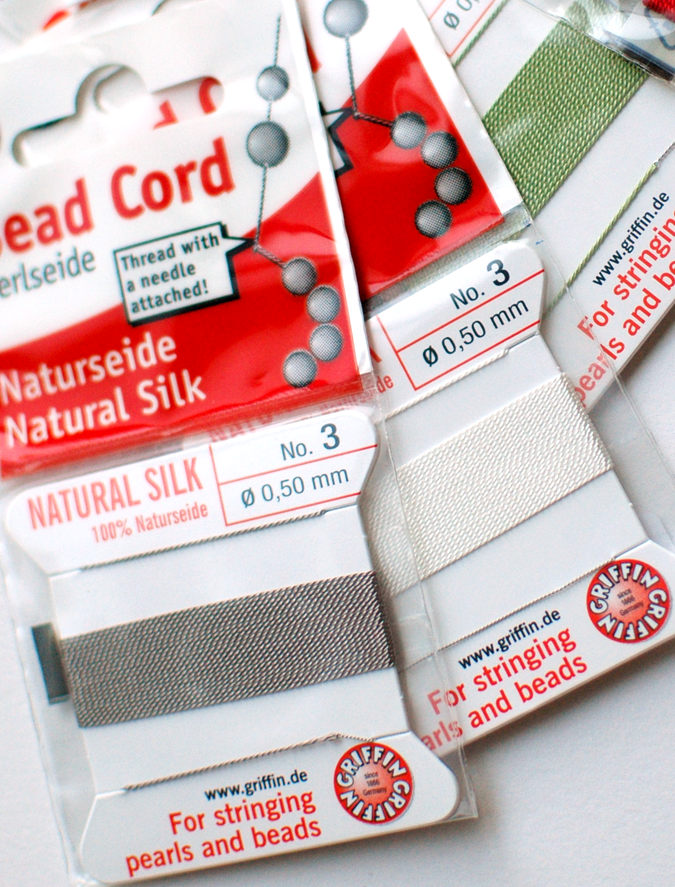 Not only did I like that the cord was available in several thicknesses and made of sturdy silk and in beautiful colors, but check out the NEEDLE. It’s flexible and the cord is attached securely to it already– in such a way that it’s sooooo easy to string the beads without the beads catching on the eye of the needle, a problem that ended several of my previously mentioned flings. I chose a handful of colors to bring home and use with the existing supplies I have from said flings.

You can find the thread here. I’m sure there are lots of other sources, I’m just sharing the one I’m familiar with. The company has no idea who I am or that I’m sharing their links, I’m just sharing because I was really, really excited about this. But you already knew I’m a total craft nerd. Nothing new there.

So this necklace is my new fave, and seems to work with about 75% of my highly fancy daily wardrobe. The silk thread is so sturdy that kids tugging at it doesn’t scare me at all.

Adrianna and I both seem to be sudden jewelry enthusiasts at the moment and there may be a few “easy jewelry” tutorials coming. Things that are not complicated to make AND work with the whole mom job thing.