So there’s this contest… and I’ve entered. Kollabora is a new craft tutorial site and store where anyone can create a step-by-step tutorial.

Having just completed my first project, I can say that there’s a bit of a learning curve, but I’m happy with the results. If you’re interested in creating and sharing tutorials without running your own blog, this might be for you. And if you just love to check out a new site full of fresh ideas? Also for you. 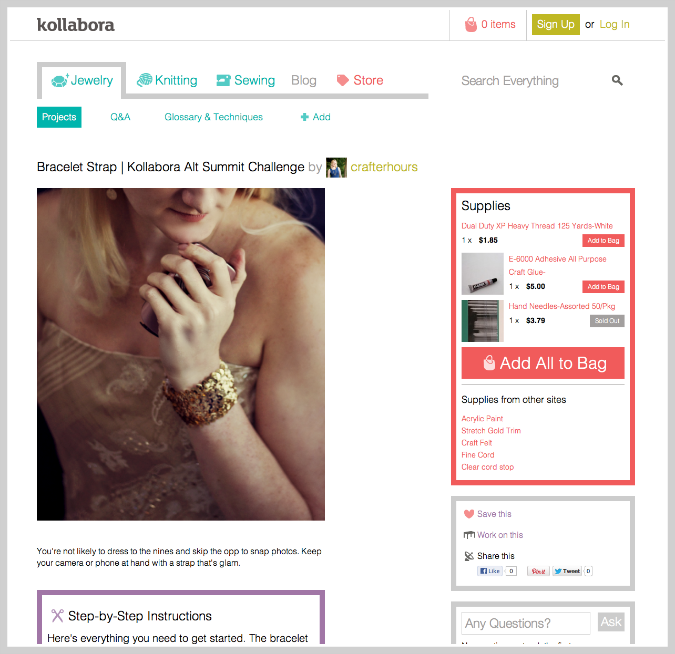 I chose to make a Bracelet Strap because it’s something that’s been on my mind for a while.

Given that it’s the point-and-shoot that’s likely to be with me on date night, I wanted a wrist strap that is more of a bracelet than a digital accessory. I wanted it to fit snugly, so I used an adjustable “cord stop” to make it. I tend to hold the camera in my hand even with the strap in place, but if I want to let it go to snag a drink? No problem. The Bracelet Strap will work with a phone, too! As long as the phone or its case has a port for a strap loop.

With this project comes a confession. Yes, I’m a DIY blogger and I love using a DSLR camera. I’m grateful that I have one and that I’ve had a lot of time to learn to use and enjoy it. But carry that around on a night out? No. I’m not that dedicated. It’s not only physically heavy but a weight on my mind– I’d cry if it were dropped or lost or stolen or left behind in preschool crisis scenario. I’m a Canon Powershot fan as far as point-and-shoots go, and there are plenty of times I can get clearer macro shots with the point-and-shoot than with the big camera.

So– here’s what I’m asking you to do. Go check it out here— and if you like it, re-pin it. ‘Cause that’s how they’re choosing a winner in the three categories – jewelry, knitting and sewing. The three winners will get a ticket to the sold-out Alt Summit and also the chance to teach a design camp and collaborate with Kollabora in the future. All of which sounds awesome to me. If you’d like to read more about the contest and how to enter, it’s here.

It’s killing me not to post about a thousand more photos of the project– my friend Sylvie and I did a whole shoot that was lots of fun. But then people might pin the other photos and not the one that relates to the contest and that’d be silly. So… maybe more later.