Today I’m up for Sewing for Kindergarten, a series run by Mie from Sewing like Mad.  When she first announced it a few months ago, I was really excited to join in even though my daughter has to wear uniforms to school.  It’s hard to get motivated to sew for kids wearing uniforms all day every day, so this was a good kick in the pants.  Plus, 4-5 is just the absolute best age to sew for.  I love their little half-toddler, half-big kid bodies that still have some roundness left.  And I’ve found that this is the golden age for taking pictures too, after they’ve gotten past the stage where they’ll throw tantrums or run away, but before they just roll their eyes and ask three million times if they can go play Wii now.  (Ask me how I know.) 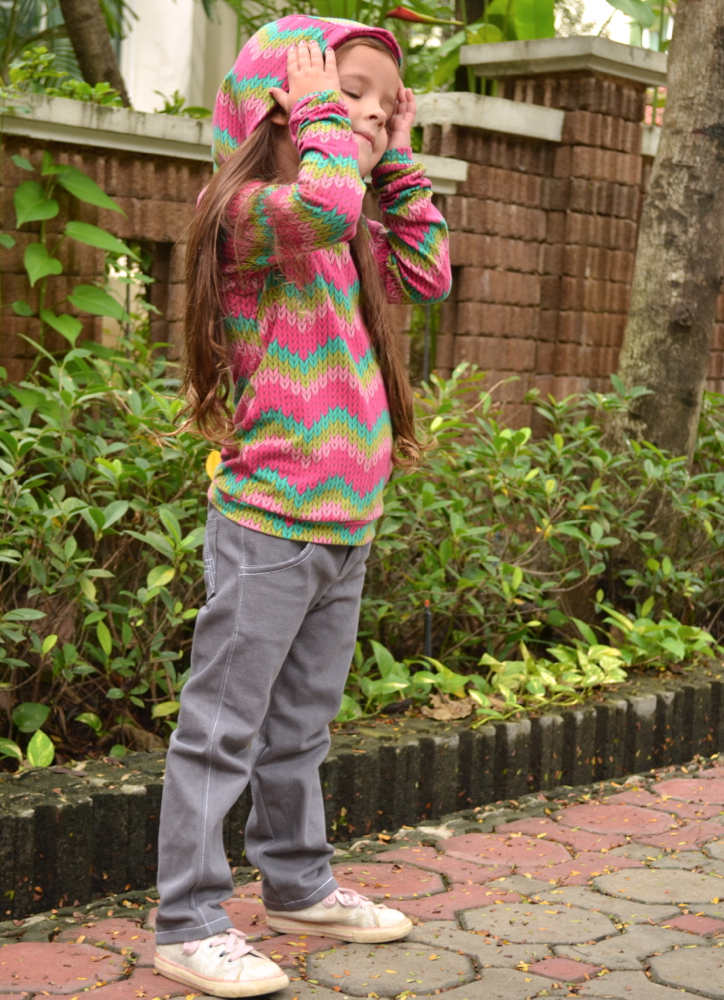 P is my brand new kindergartener and is also turning 5 this weekend.  She just learned to read and swim and is at such a fun stage.  I wanted to make her a really fun, casual outfit to reflect her personality right now. 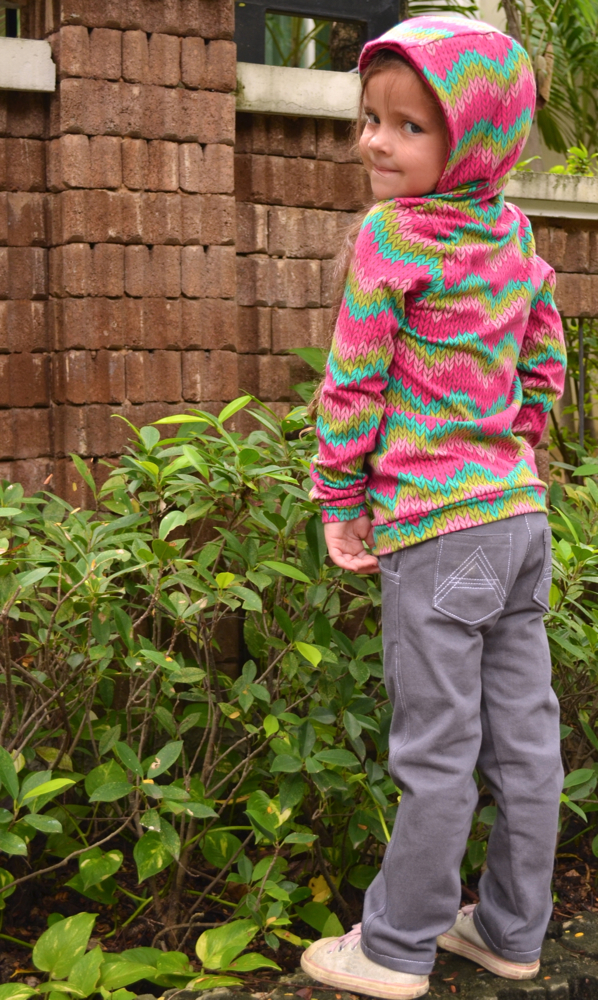 I don’t normally get a chance to sew jeans and long sleeve shirts, living as we do in a place that is generally the same temperature as the surface of the sun.  However, we have an upcoming trip to New Zealand that we are all ill-prepared for, clothes wise. I’m told it’ll be in the mid-60s while we’re there, so naturally I’m planning wardrobes that would be comfortable on the ice world Hoth, because that’s what 65 degrees will feel like to us.  Arctic chill.  I’m still working out how I can design an internally temperature-controlled bodysuit for myself.  Maybe I should just stop shaving my legs. 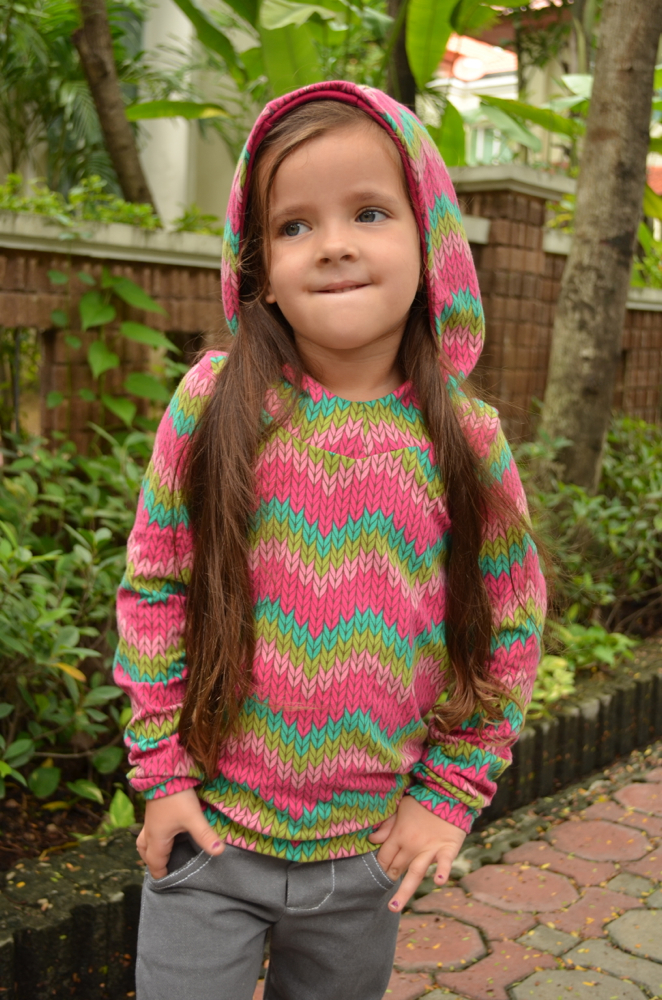 Moving on.  The beyond-adorable hoodie she’s sporting is none other than the newly released hoodie version of the Bimaa Sweater by Sarah of Loubee Clothing.  This is one of those perfect garments where the pattern takes longer to tape together than it takes to sew the sweater (because it’s fast, not because it’s hard to tape together!), construction is simple, the fit is spot-on, and it has endless options for customization.  I see many of these in my future.  I made P the size 6, which is the biggest size, knowing that it would be pretty loose on her.  I’m hoping that she’ll be able to wear it again next fall for first grade when we’re back living in the bleak frozen tundra of northern Virginia and she’s in public school with all the non-uniform wearing plebeians again.  (kidding! I love public school!  And I love private school!  and homeschooling! and truancy!  I don’t judge.  Actually, given a choice, I’d choose no uniforms because it means you can go longer without doing laundry.)  Susan sent me the amazing knit knit fabric, which is actually from Joann’s!  I’m hoping they’ll have cute fabric like this when I get back and it wasn’t just a fluke. 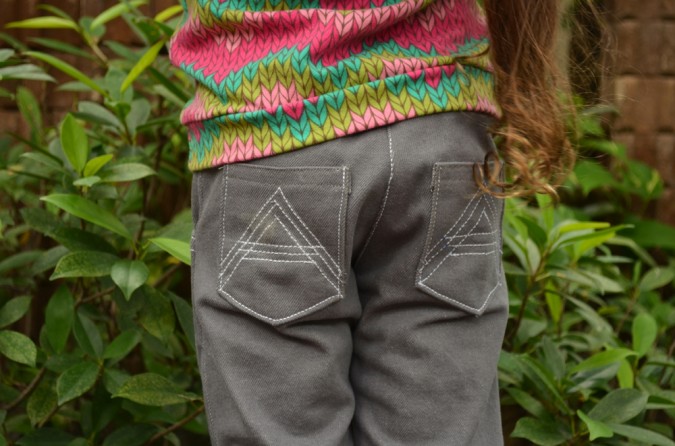 The jeans….oh, the jeans.  I can’t stop loving them.  They’re the Skinny Jeans from Peekaboo Patterns.  I got this gray denim for another project, but in true Adrianna fashion, I waited til the last possible second to make this outfit so I had to use what I had in the stash.  The jeans are supposed to be stretchy, but this denim is super thick and not stretchy at all.  So I made a size 5 instead of a 4 and they fit more like straight than skinny.  Either size probably would’ve been fine, but this way there’s a little growing and moving room.  I had way too much fun designing the stitching on the back pockets.  Giggling with glee the whole time about the absurdity of how cute they were.  Or just punch drunk from lack of sleep.  One of those.  I wanted to make P’s for P, but in the interest of hand-me-downs, I did A’s for our last name initial.  My only mods to the pattern were to insert a zipper fly (the easiest zipper you’ll ever insert!), and I did a three piece waistband instead of one long tube so I could leave the internal side seams open for adjustable elastic on the back waistband.  If you’ve never tried to make jeans, I’d say this is the pattern for you.  They’re much much easier than you’d think.  I think jeans are scary because the fit matters so much.  The actual construction is a breeze. 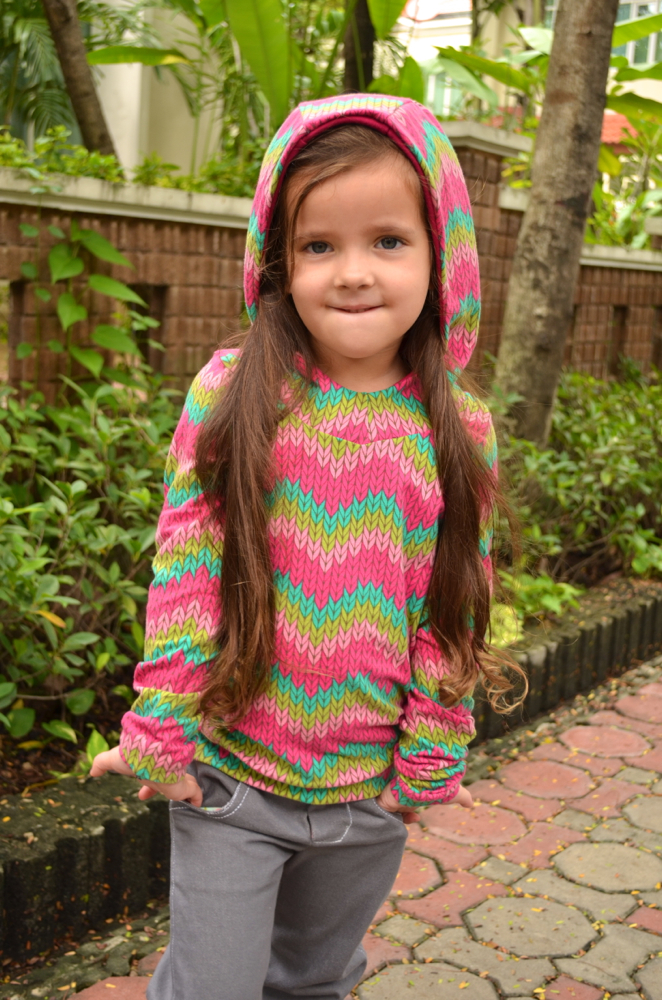 This whole outfit together just makes me smile, and it was a big hit with my daughter too.  I’m so excited that she’s loving Kindergarten so much, but hate how fast she’s growing at this stage.  She told me on the night before school started that she’s not my baby anymore (sob!).  Luckily I still have my back-up baby, so boo-ya.

Thanks so much for having me in this fun series, Mie!  Be sure to follow Sewing Like Mad so you can see the rest of the series too.  Check out her blog for a huge giveaway and to see where you can share your own Sewing for School projects, and of course to see all the amazing stuff Mie makes.  She’s competing in Project Run and Play too!  Good luck Mie!!