This year’s Halloween is pretty monumental.  It’s the very first year I’ve ever blogged about costumes here at Crafterhours!  I know, right?  And it’s a great year to start, because my older girls went as kids whose mom grew up in the 80s!*  I present Rainbow Brite and Jem.  My older daughter actually thinks she’s pop star barbie from the princess and the popstar, or some such foolishness.  So, shh, don’t tell her she’s actually something awesome. 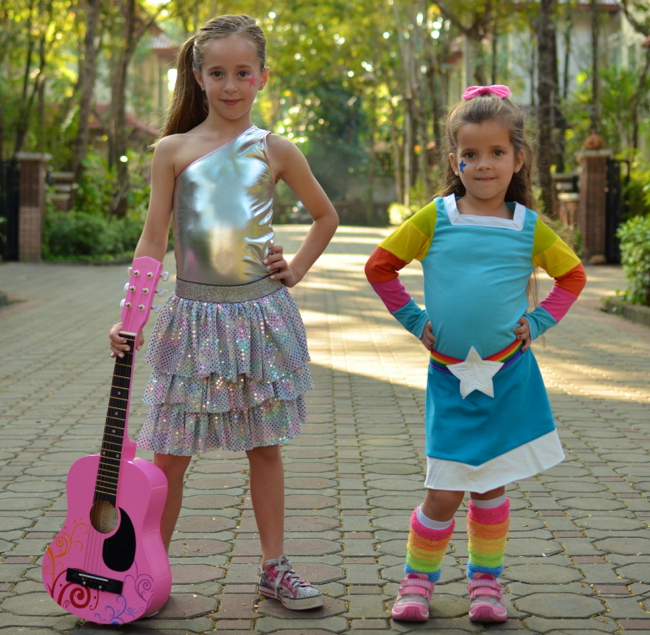 Alright girls, can we pose again, but this time with a little more attitude?  You didn’t look like you were trying hard enough to look like a teenager in that last shot. 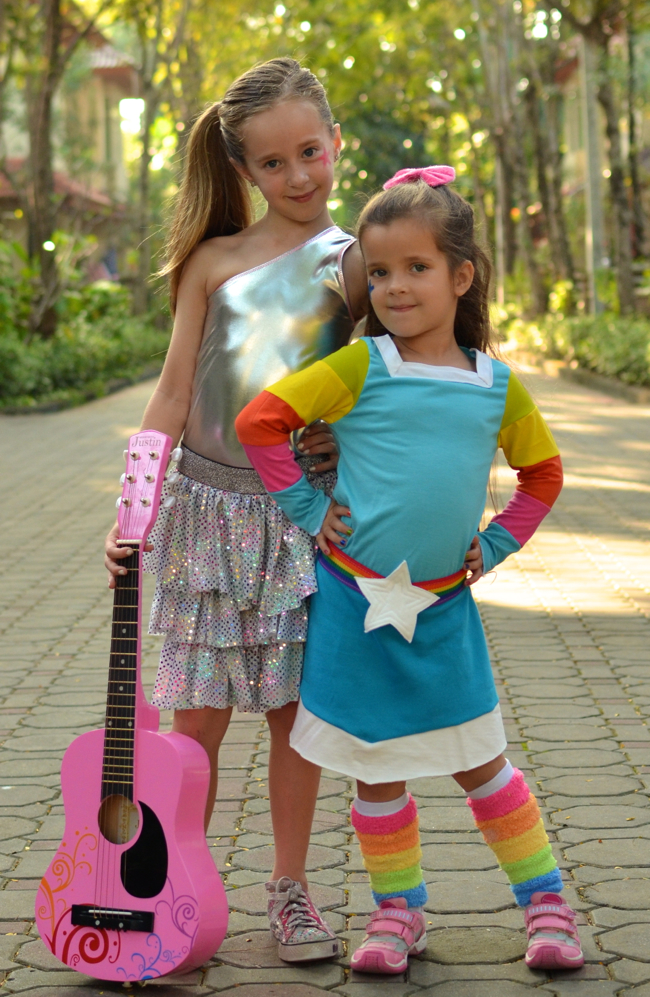 I had the Jem costume fabric sitting on my shelf all through Project Sewn but didn’t get started on it until three days ago when we returned from vacation.  Nothing like procrastination to make the world go round.  I just traced a bathing suit to make the top and it was super easy, probably took 10 minutes to construct.  I need to attempt full bathing suits at some point.  Ruby has two great free tutorials and patterns if you’re looking for one. 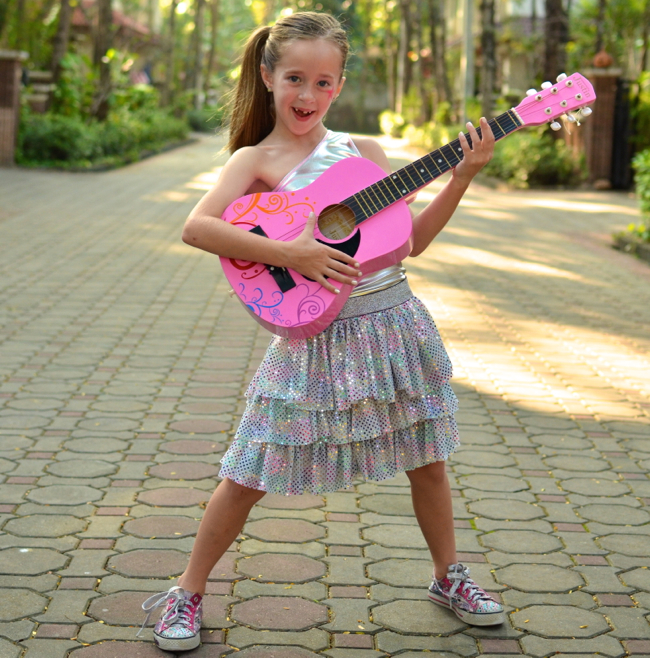 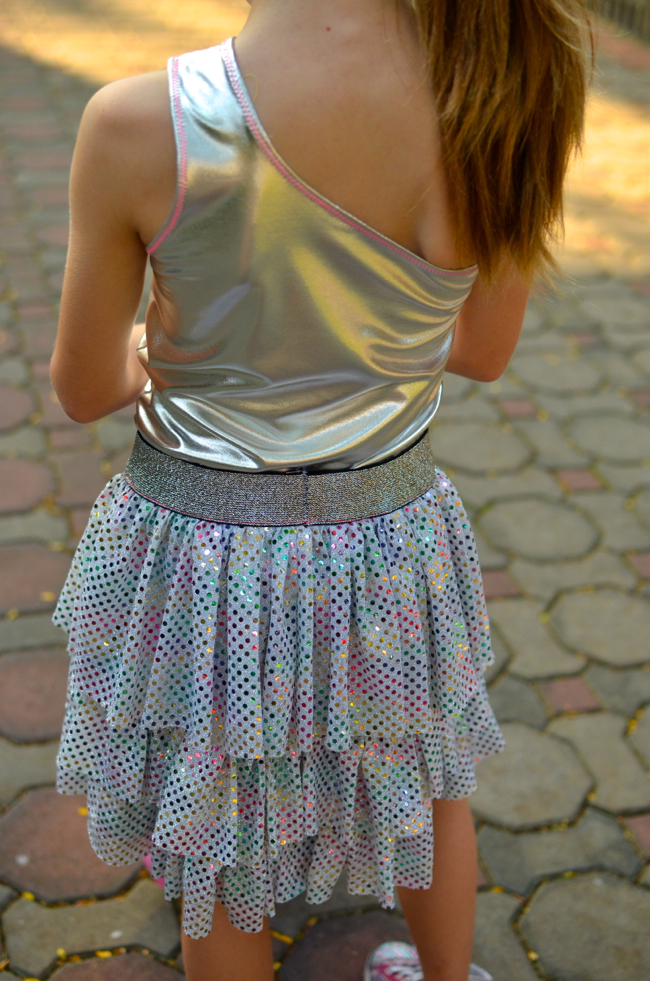 The skirt is a simple tiered skirt, but took FO-EVAH to make.  Probably because I have three kids and errands and chores and dinner.  But also because each ruffle is the entire width of the fabric and I made 6 of them.  At least I didn’t have to hem them.  (That’s Rule #1 of Halloween sewing, by the way.  If it doesn’t fray, it doesn’t get hemmed.)  But I love how full the skirt looks with all those ruffles.  I’m thinking a 7 year old could probably pass it off as everyday wear, yes? 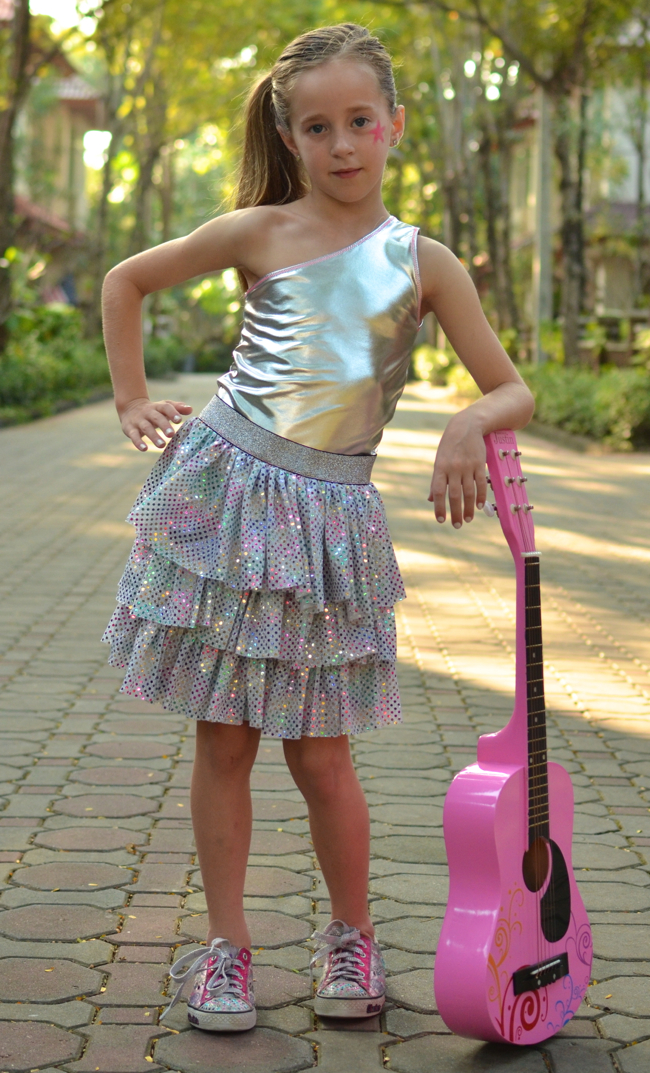 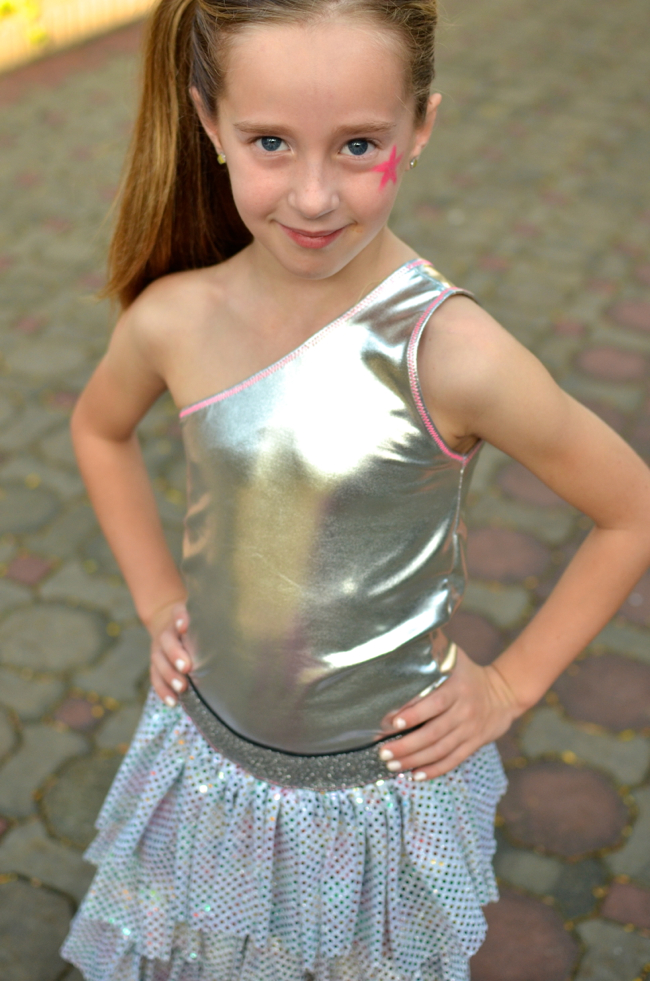 I finished Jem two days before Halloween and that’s when I decided I should make my middle daughter a costume too.  She happened to be playing with a Rainbow Brite doll at the time, and it hit me that I’ve never made a Rainbow Brite costume before!  How is that even possible??  So despite the fact that neither she nor her friends have any idea who Rainbow Brite is, I forced it on her.  It wasn’t hard.  She is covered in rainbows, after all.  And really, what other costume could I make with only fabric found in my stash?  I mean, really, who doesn’t always stand ready to make a Rainbow Brite costume at any moment? 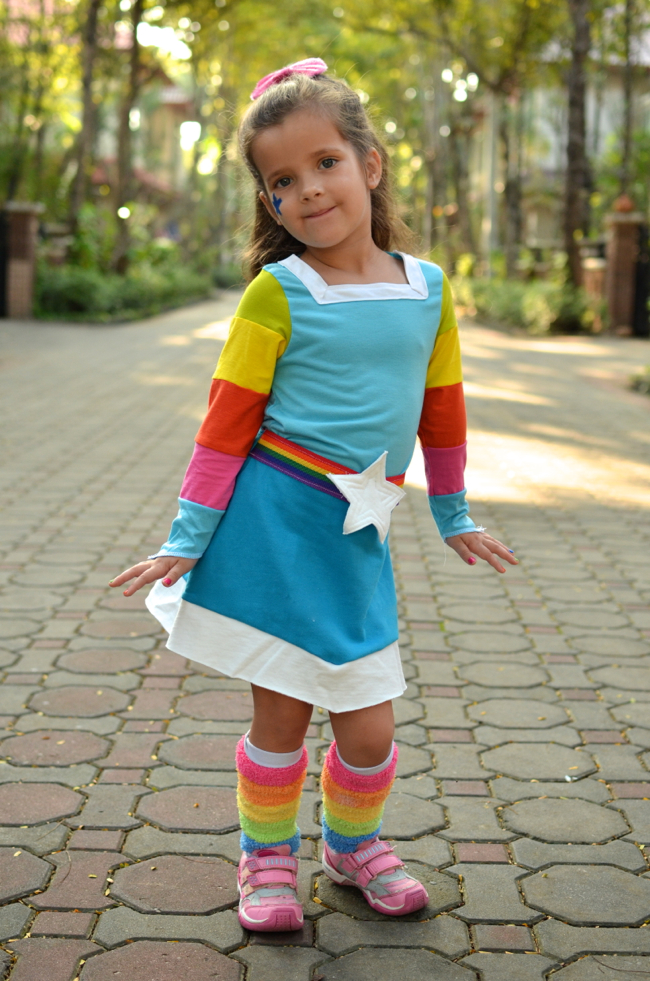 The shirt is the ever versatile Bimaa, with an altered neckline and v-shaped sleeve hems.  The skirt is a simple a-line, cut to a “v” in the center front.  It has an elastic back waistband. 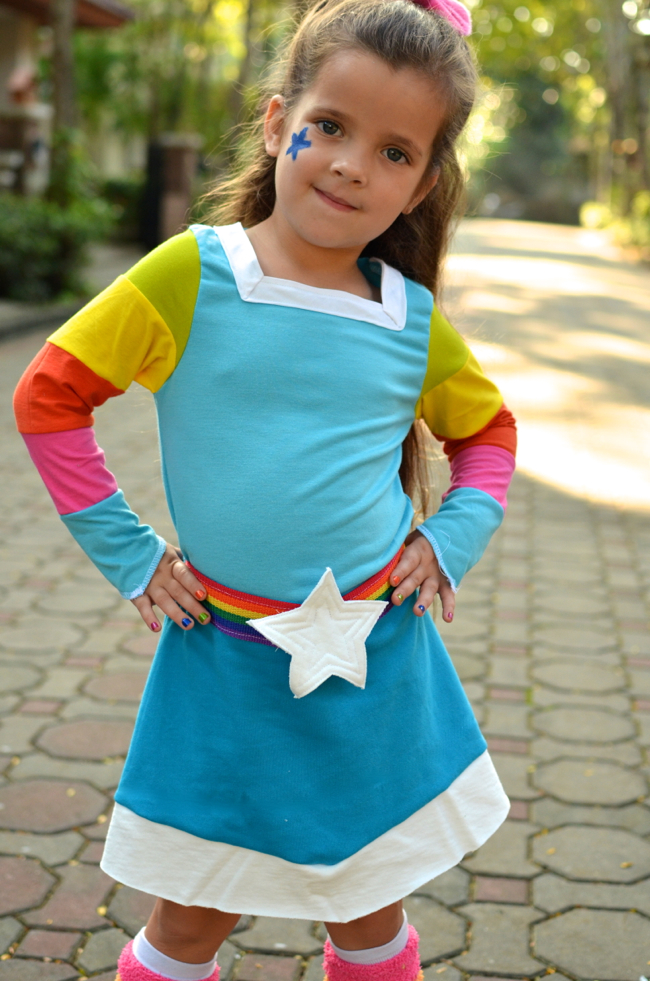 The shoes were my magnum opus.  My friend had actually asked me if I had any idea how to replicate Rainbow Brite’s boots a couple months ago and I mentioned maybe using scrunchies?  Well, I totally forgot about that conversation until it came time to make MY Rainbow Brite boots!  So I guess our daughters are probably twinners 4000 miles apart tonight.  (sup, Aubrey!)  Anyway, yes.  Scrunchies! They worked perfectly!  Love when life is simple like that. 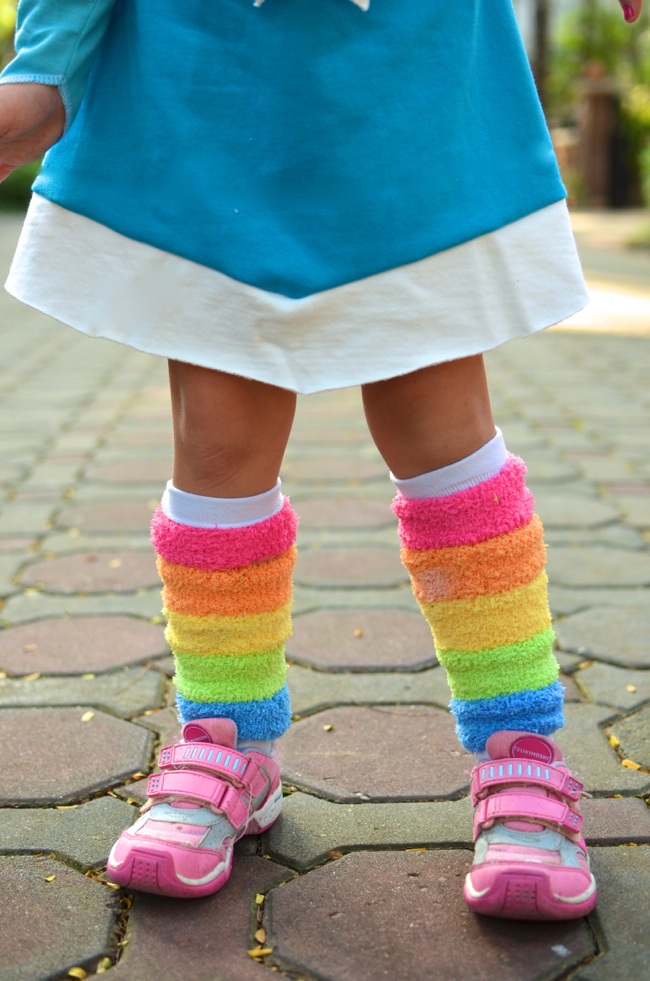 I had a couple parents stop her and take her picture.  Children of the 80s unite!  At least the adults enjoyed it.  All she got from the other kids was, “what are you?”  Kids these days, I tell ya… 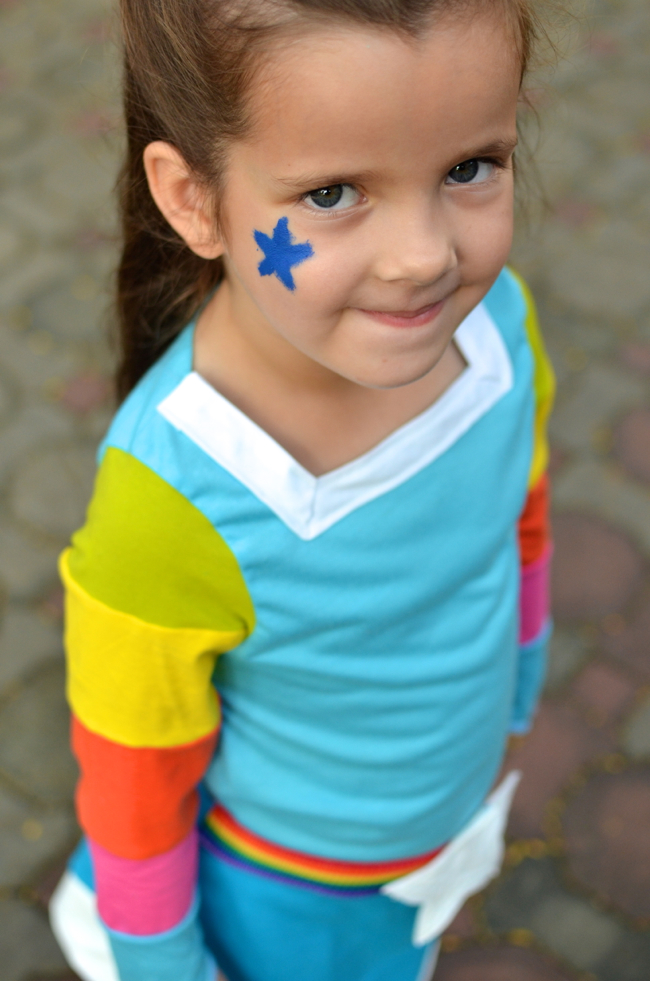 *in case you’re wondering, my youngest daughter went as a 1 year old who is still jet lagged and wants to go to bed at 5 pm every night.  For authenticity, she randomly broke into sobbing during dinner.  Best costume ever.

« Baby Announcements – and a Giveaway! [Giveaway Closed]
Stencil Abuse: Are You Guilty? »