This post has been so long in the making that you probably went ahead and figured it out on your own.  But I’m finally sitting down to write my farewell to Crafterhours.

Susan was the main force behind starting this blog back in 2009, exactly 6 years ago this month actually.  If it wasn’t for her, I’d probably still be sitting here thinking, hm, maybe I should start a blog.  Back then I thought the market was saturated because I could easily name 10 sewing blogs off the top of my head.  I had no idea what was about to happen.  If Susan hadn’t propelled us onto the sewing blog scene I never would’ve had a voice.  Now there are hundreds and probably thousands of sewing blogs and it’s easy to get lost in the sea.  All that to say, I owe the last six years of experience and making a name for myself to her.

Three years ago this month I quietly and tentatively started selling sewing patterns under the name Hey June.  I didn’t know where it would go, and always assumed the answer was nowhere.  It was definitely a hobby.  But the hobby grew and soon I was treating it like a business.  As that happened, I started feeling the natural pull that occurs when you have too many irons on the fire – parenting of course was and will always be first, and then I had Crafterhours and Hey June and a personal blog in addition to, you know, life.  I was feeling the strain to keep all my plates spinning, and my response to situations like that is to usually let them all fall.

About a year ago I finally understood that there was no way I could keep everything going and eventually something was going to have to give.  My business really started taking off around that time and I realized that instead of dreading the day that I was going to eventually have to rejoin the workforce, I could instead focus on employing myself.  Once I made that decision, I really slacked off on Crafterhours and just felt niggling guilt about it constantly.  I want to emphasize that it was completely self-imposed.  If Susan’s repeated anything over the years it’s that the blog is not the priority and if you have something to post, post it, and if not, don’t.  But I knew I wasn’t doing my personal best and felt bad about it.  The straw that broke the camel’s back was when I saw a thread on FB where someone was insinuating that either Crafterhours or Hey June was copying the other because I had my free patterns in both places.  I knew then that if I was so torn and confused about contributing to two online presences, my readers and customers were even more so.

I was rewatching Parks and Rec for the 2nd or 3rd time (like you do), and saw the episode where Ron Swanson is telling Leslie Knope that she has to choose between running the parks dept and running for office.  They have a moment of clarity sitting by a lake and it sounds cheesy, but it was a moment of clarity for me too.  It cemented the decision I had been avoiding for months and I finally felt peace about it too.  So that’s when I stopped writing for Crafterhours and now you can find me writing and working full time over at Hey June Handmade.

So, to sum up my reasons for leaving Crafterhours, I’ll leave you with the wise words of our generation’s greatest philosopher: 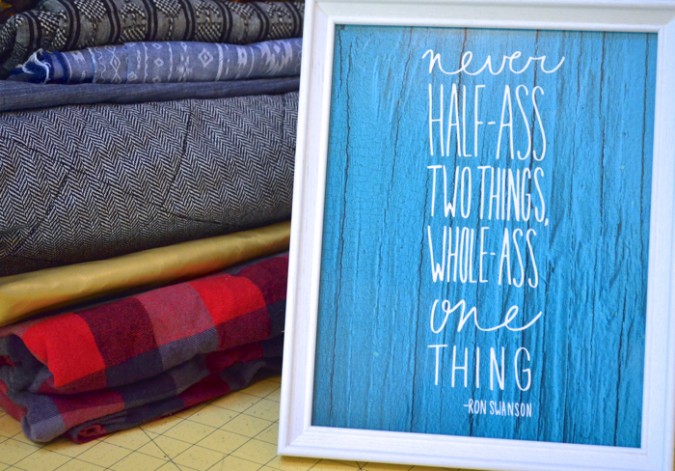 yeah, I framed it.