…and as such deserveth a shirt that doth acknowledge his accomplishmenteths. Or somethingeth.

Translation and expansion: our very cute preschooler friend Samuel turned four on Monday. His party is coming up this weekend. He’s going with the Knights and Dragons theme (having attempted to bring back last year’s popular “Pirate” theme and failed at the glare of no-party-repeats-please Mom) and I thought a shirt like this one might make him happy. It appeared to work– he immediately stripped half-naked and asked to put it on. Really, that’s about the highest praise I could expect from a four year old boy, right? He won’t be fanning us on Facebook until he’s at least five.

To make it, I printed the design in reverse on transfer paper, ironed that onto some white knit, fused it with fusible interfacing onto a blank shirt and stitched around the edge with a straight stitch. 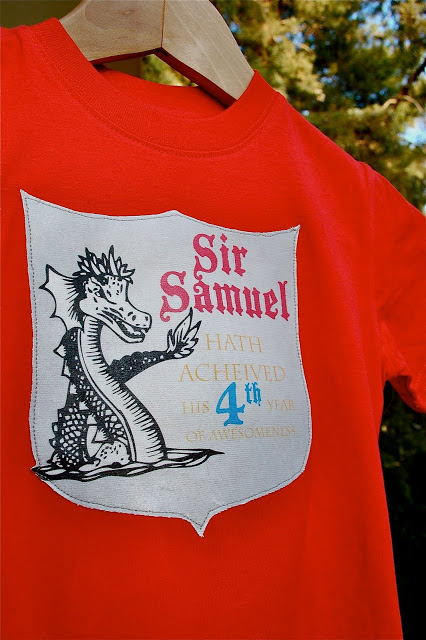 And now I hold my breath while K goes to a party full of swords and tiaras. She loves them. That’s the problem. Whoever has the one she wants…. is a target. Have I mentioned that I’m going on a trip this weekend and won’t be back until the tail end of the party? It’ll be hubby’s job to supervise the sword and tiara jealousy. Let’s hope there’s no bloodshed.

« Ruffly Voile Runner
The Husband Finally Gets Something Crafty to Wear »