One of my funnest* e-mails ever arrived in our inbox this week. It was a message from Kim at Spoonflower. This would be the Kim that inspired Spoonflower by saying to her husband “geez honey, wouldn’t it be crazy awesome if you could print fabric for me?” (or something like that.) The Spoonflower blog featured us on Wednesday and they’re doing a giveaway of one of our sets! You have until Wednesday, May 9 to enter by commenting at the Spoonflower blog or on their Facebook post. 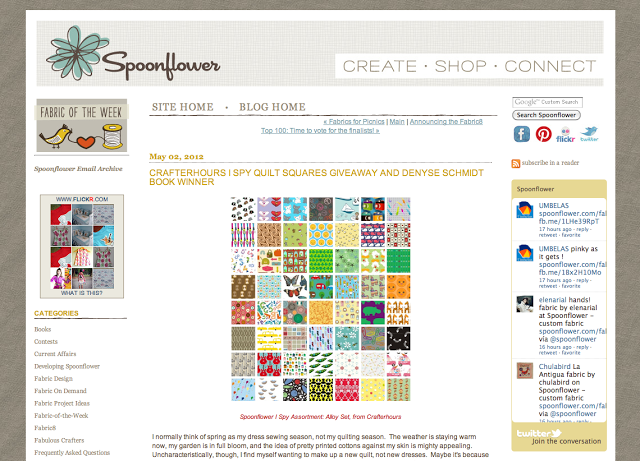 Kim featured the Alloy set, but you get to choose which one you’d like. I love a giveaway where you get to do the choosing! And I really should have posted about this earlier in the week but I got a bit distracted about how cool it was. First, that they featured us. It’s an affirming virtual high-five that I really appreciate. I kind of sat there and re-read the e-mail five times or so to make sure I understood it properly. As a creative person, you can’t help but be happy when you hear that someone likes what you’ve created. And beyond that, it also that it means more Spoonflower designers know about I Spy.

As far as I could tell, putting together a set like this hadn’t been done before, and I wasn’t sure how it would be received. Like, would the designers be weirded out that I was re-selling their fabric? Turns out, every single one that I’ve communicated with about it was totally excited that their work had been included. And now that it’s been highlighted by Spoonflower itself, more designers might have us in mind when they’re scaling their work. Which means even more awesomeness available for future sets– since the scale is critical to the process of putting a set together.

If you follow crafterhours on Facebook or on Twitter @crafterhours, this feature is old news. If you don’t, and you want to see my random freak-out notes about things like this, or responses to poor Quilt Dad over things like his kids bringing home an unwelcome gift, follow us there. Our 3rd Annual Skirt Week is coming up later this month (and details about it coming up this week) and there will be a lot to see– follow us on Twitter and/or Facebook so that you don’t miss a thing!

*yes, this one was primarily aimed at Adrianna. Though I maintain that the word should be a word. A much-celebrated word, along with “funner”.