A few weeks ago I got to go check out what will be our new home – Bangkok, Thailand! We are headed over in June and especially now that I’ve gotten to visit – I really couldn’t be more excited. I’m going to jump into the fabric shopping now, but at the end I’ll talk a little more about the move itself. 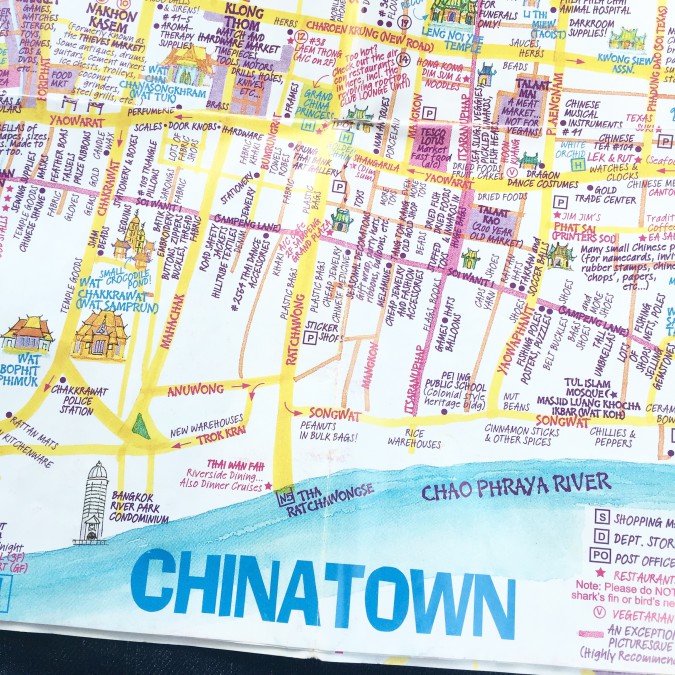 After googling and talking to Adrianna about Chinatown and having this map (affiliate) in hand for the trip, I ended up not needing to know anything about where I was going because a friend got me there. Yay for friends who know things! But we parked at the Grand China Hotel and walked a few blocks to get shopping.

Walking down Sampeng Lane to get to the fabric, we passed all sorts of jewelry and jewelry packaging. Makes me want to sell things just so I can package it up! Little bags for little things… 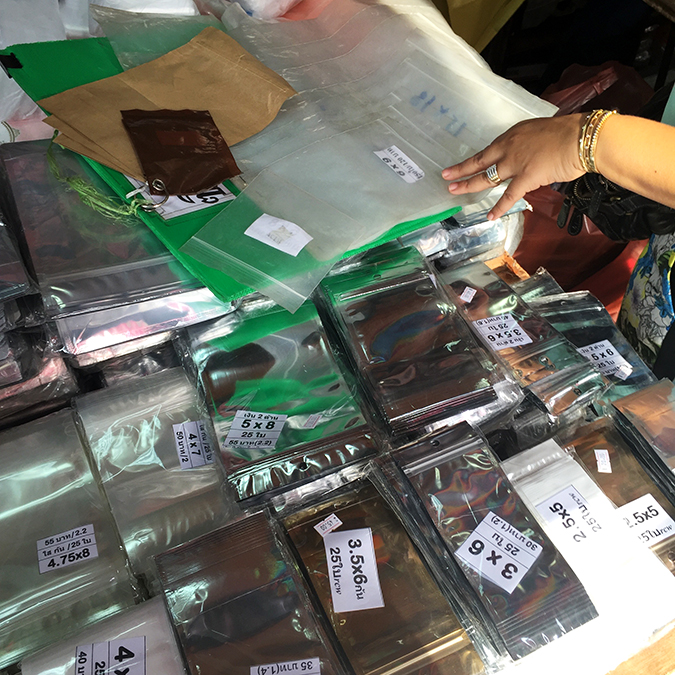 And bigger bags to bag up all those little bags… 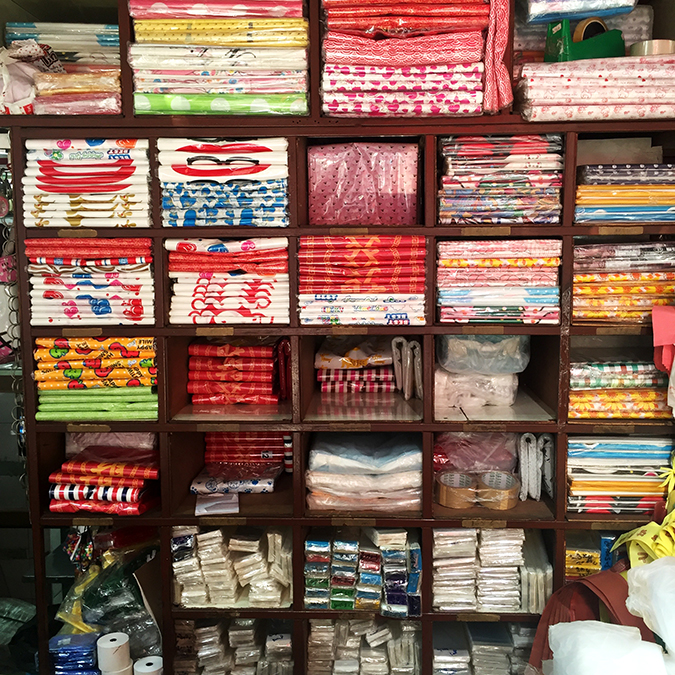 And then we got to the fabric section. Not exclusively fabric – there were all sorts of everything everywhere with no plan other than “here’s an open spot, let’s fill it”. 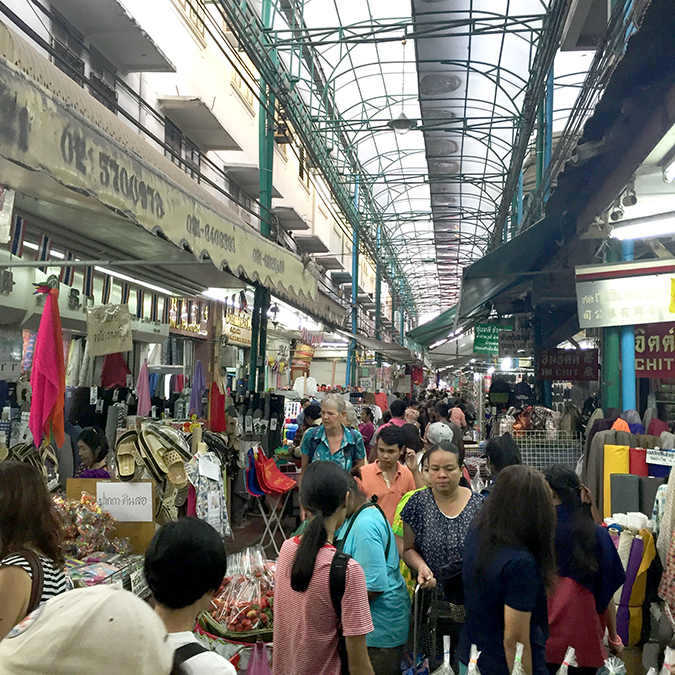 Once we made a turn into fabric world, the first thing (shiny objects!) that caught my attention was sew on crystals! So so many! 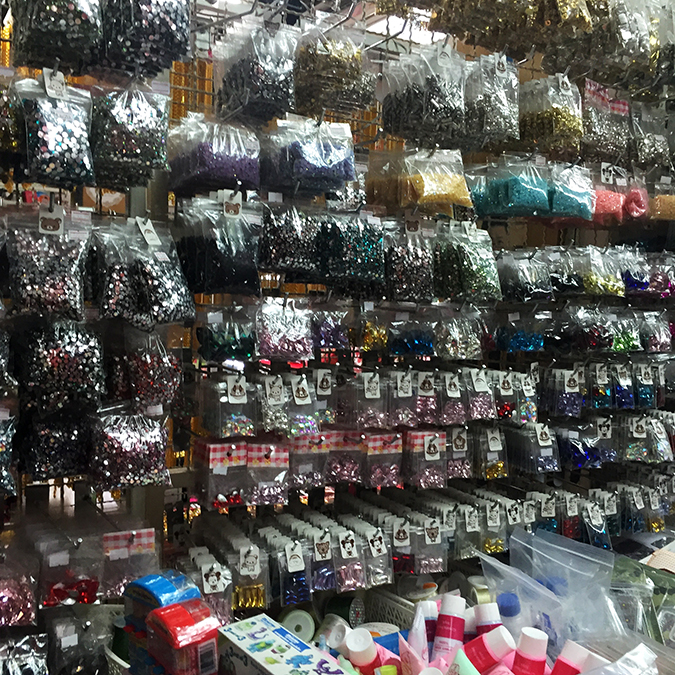 A closer look so you don’t have to be so squinty. 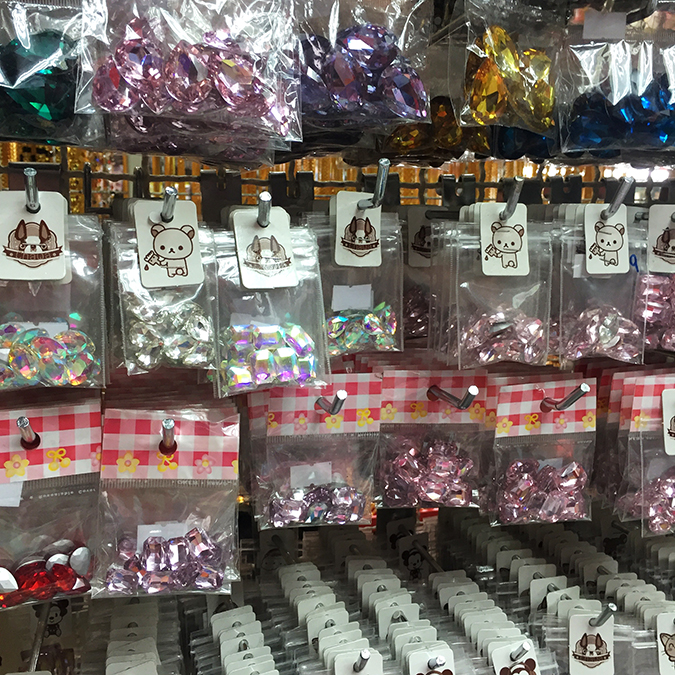 A little farther in – the fabric was everywhere. Dozens and dozens of individual stalls and some larger shops. Wholesale buying is the way things work here, but it can start at 3 yards, and it turned out that when I bought 3 separate cuts that totaled 3 yards, they applied the wholesale discount. So buying “wholesale” didn’t mean I had to buy a lot of any one thing, at least as far as my one trip went. 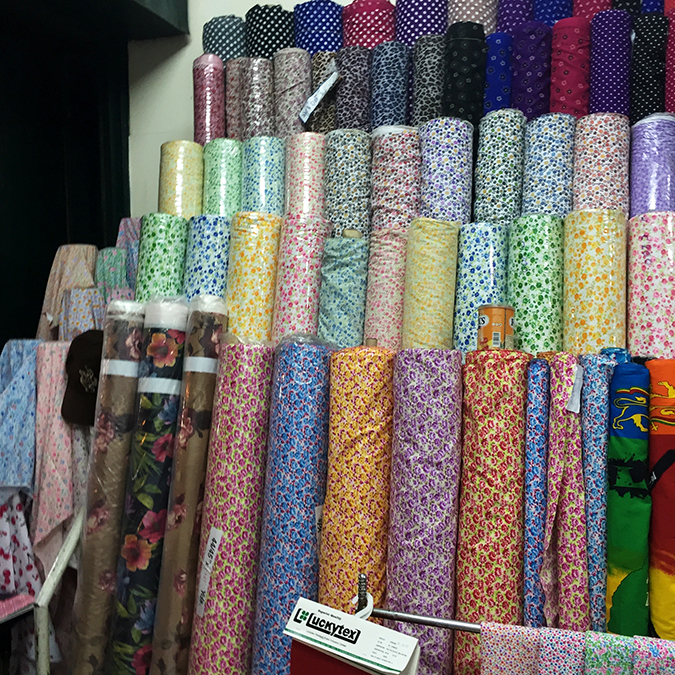 There were also FANS everywhere, and some of the shops had air conditioning. Because I wanted to stick around and see it all, but without the occasional break from the heat (And it wasn’t even all that hot by Bangkok standards while I was there) it’s hard to imagine staying long.

The sign you see above – 60 baht – that’s less than US $2/meter. And a meter is more than a yard. When people say something’s really cheap I always want numbers. Do we have the same idea of cheap? Speaking of… in this shop I found quilting cottons. This cat print reminded me of a cat obsessed sewing friend. 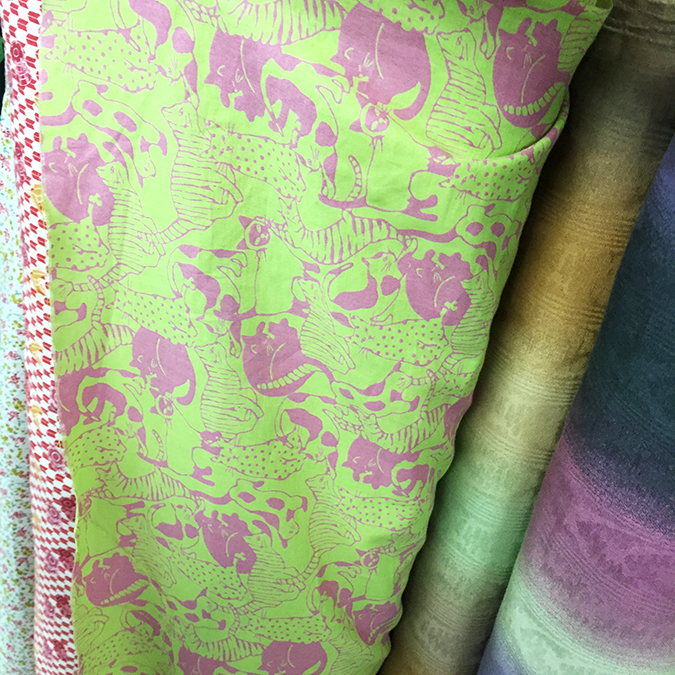 Lots of cotton lawns and plenty of well-known designer prints. 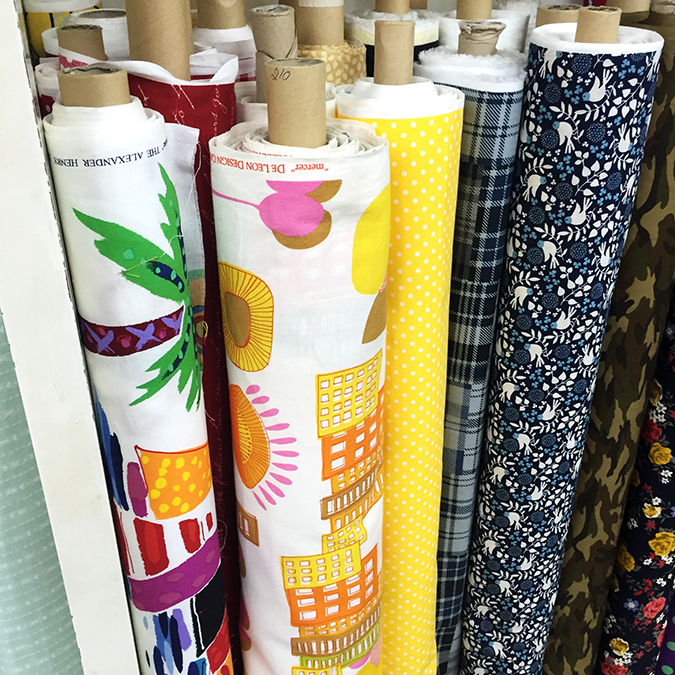 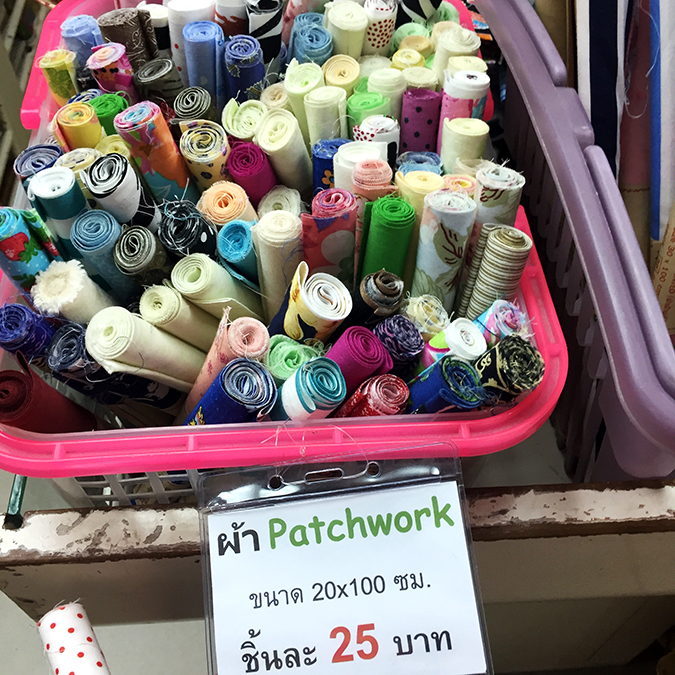 I was about to say that my favorite shop was next – but I can’t say that. There were at least 5 I can’t wait to go back to. But in the next shop there were embroidered eyelets that I wanted ALL of. 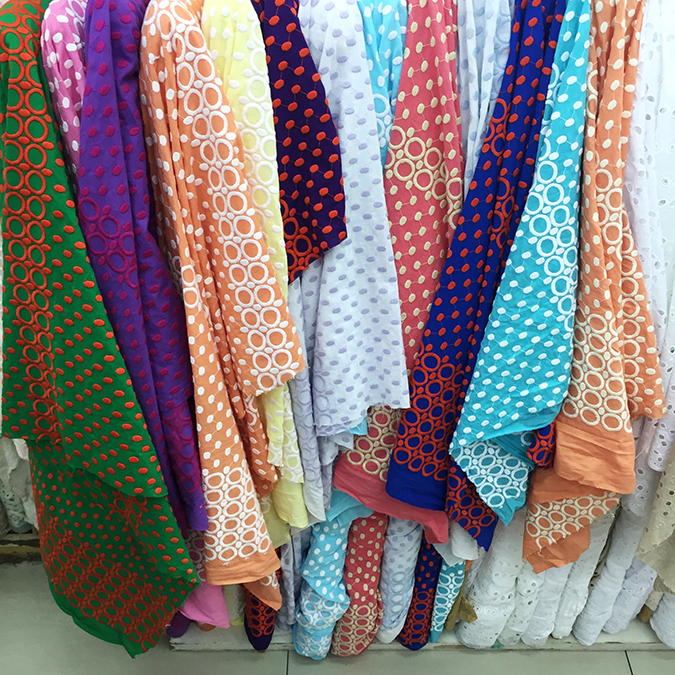 SO MUCH YUM. I agonized over whether to take some home. But decided I could ponder that for a few months. BUT I’LL BE BACK FOR YOU, MY PRETTIES! At 35ish Baht to the US Dollar these were $3-5 a meter. 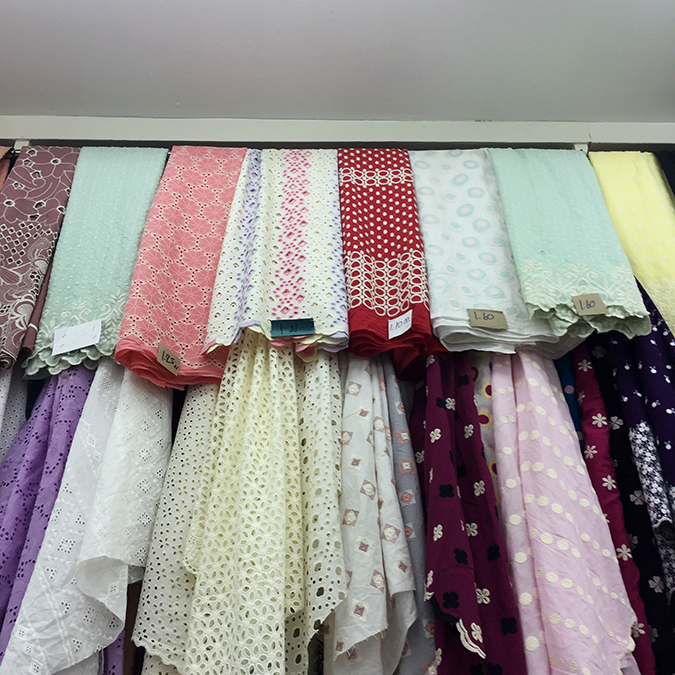 And then there were embroidered chambrays! 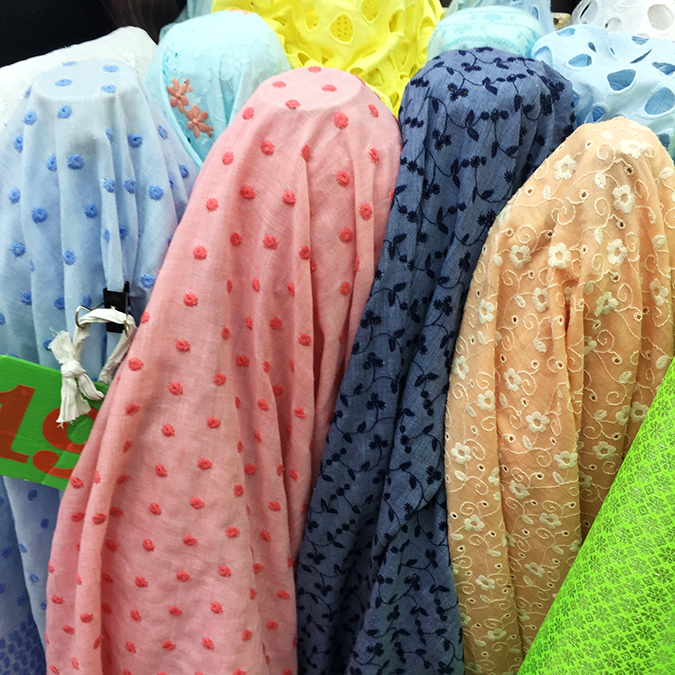 Next I found adorable birdie prints for under $3/yard. 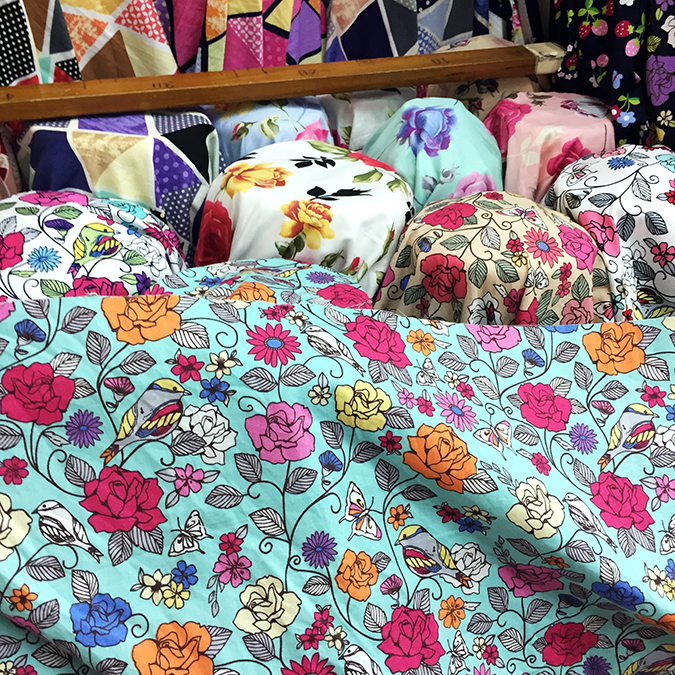 And then a knit store that made me flip out a little. 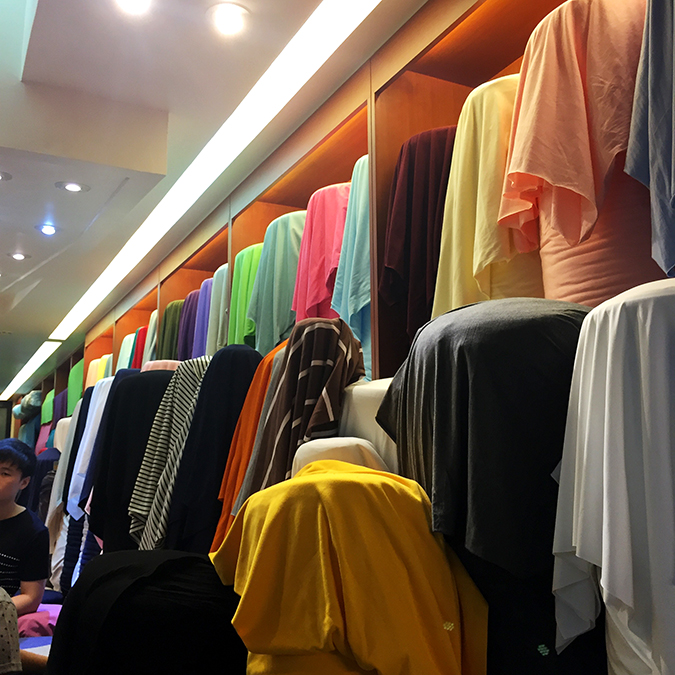 They had a slub knit – I never know what else to call it. Popcorn? Confetti? Whatever you call it, I love those little bits of other colors that get included in this fabric. I bought enough for me and another crafty friend to share! (photographed back at the hotel) 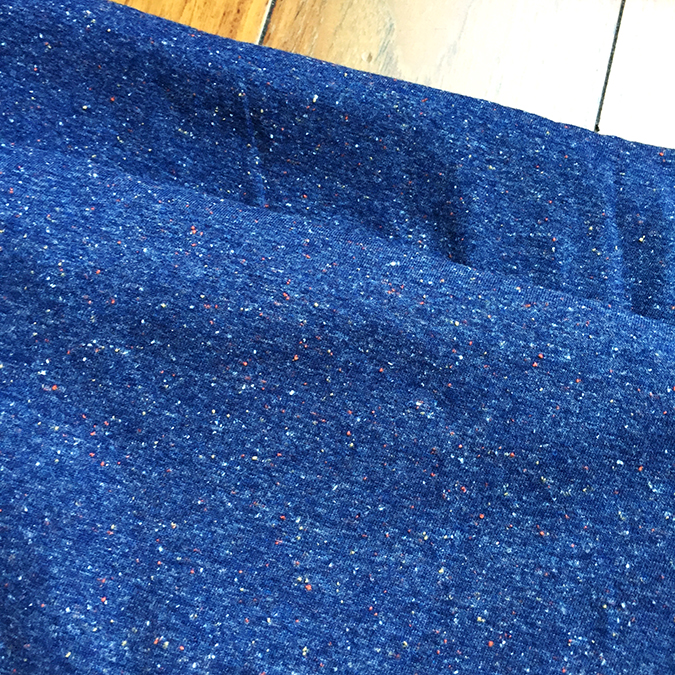 And at the knit store they packaged my kilo of knit (or was it more than one kilo? I forget.) in a knit bag! 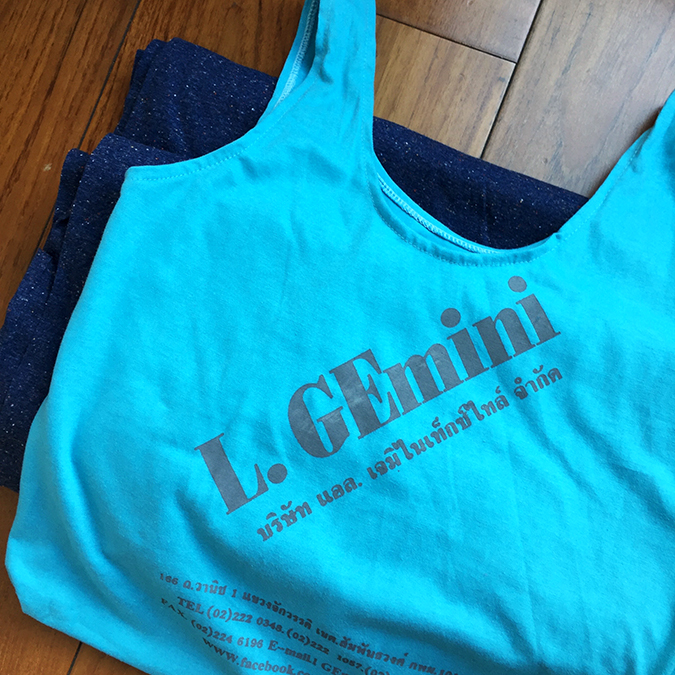 Next we found trims. Every size and color of pom pom you could ever need. 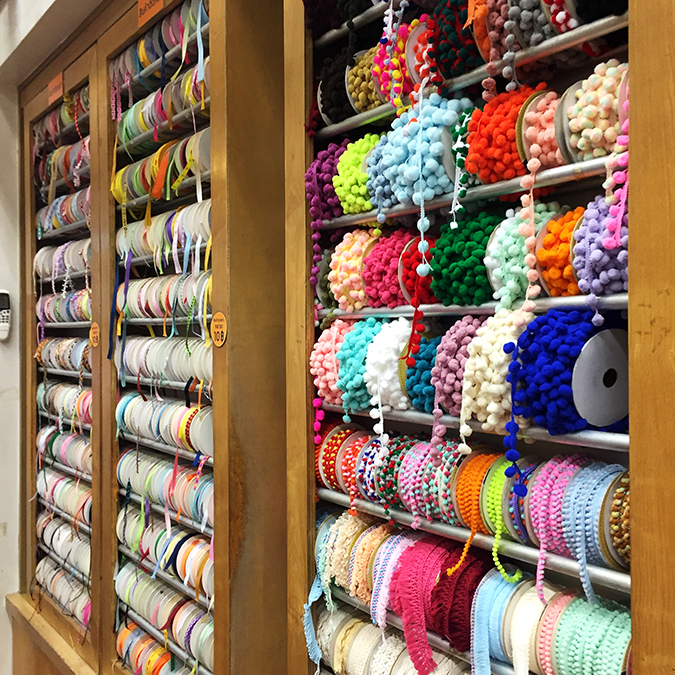 As you’re pressing on through the crowd there are food vendors walking up and down the aisles with portable treats – and they seemed to be snapped up as often by the fabric vendors as by the shoppers. In Bangkok street food is EVERYWHERE. I loved it. Strawberries aren’t available or affordable year round but I happened to be visiting during strawberry season. My friend learned the hard way that that bowl full of sugar? 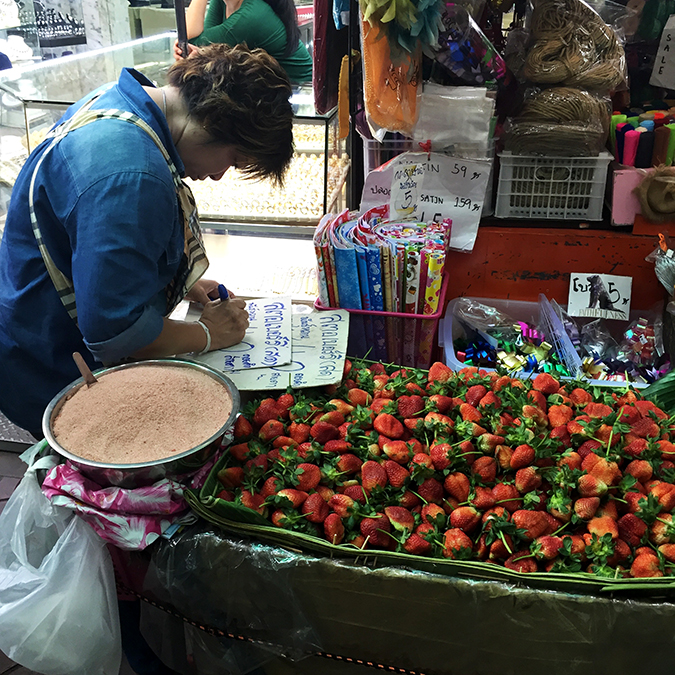 It’s actually salt! And while there’s lovely fabric everywhere, often it’s crammed in next to things like fried seafood. I was impressed that none of the fabric I brought home had much of a weird smell though. 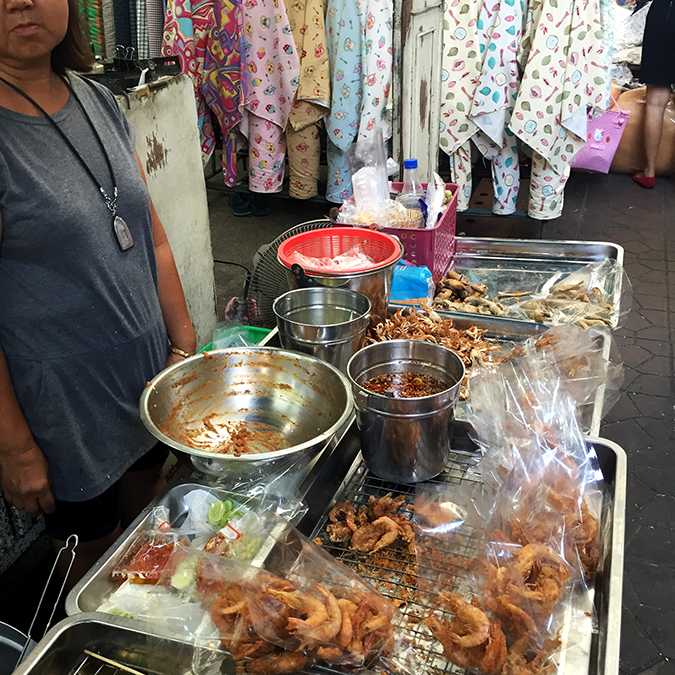 At this point I’m realizing how much I didn’t photograph. There are a bunch of stalls and shops I wish I’d gotten photos of. But the good news is – I’ll be back in a few months for more! 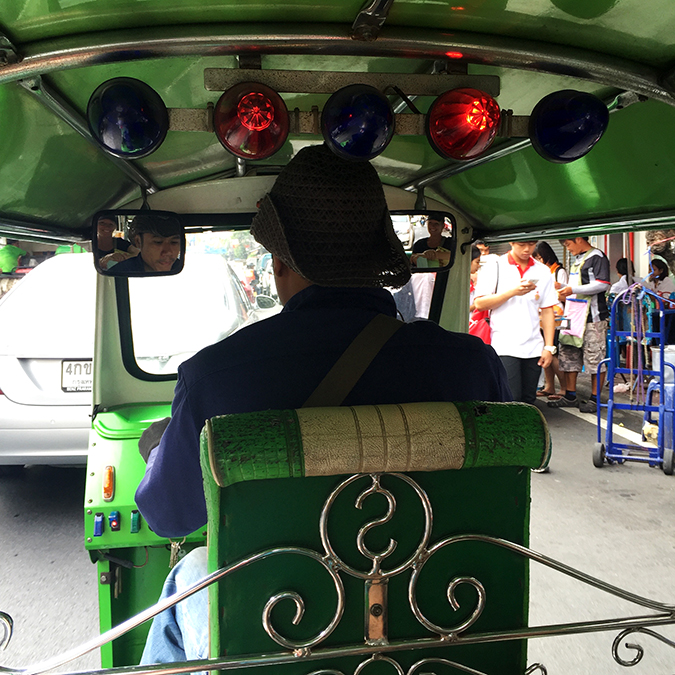 Our family will be moving in June for what will likely be a 3 year assignment. People ask what the kids think – and really, they’re THRILLED! We’re all excited about this move. There’s lots where we live now that we’ll miss, and being so far from family and friends will be hard, but we’re really excited about all we’ll get to do and see there. I got to check out schools and housing and all of that looks as nice or nicer than what we’re used to in the US. We have a few more months of America to soak up before we head out! If you’ve been fabric shopping in Bangkok and have any tips for me when I go back, I’d love to hear them! 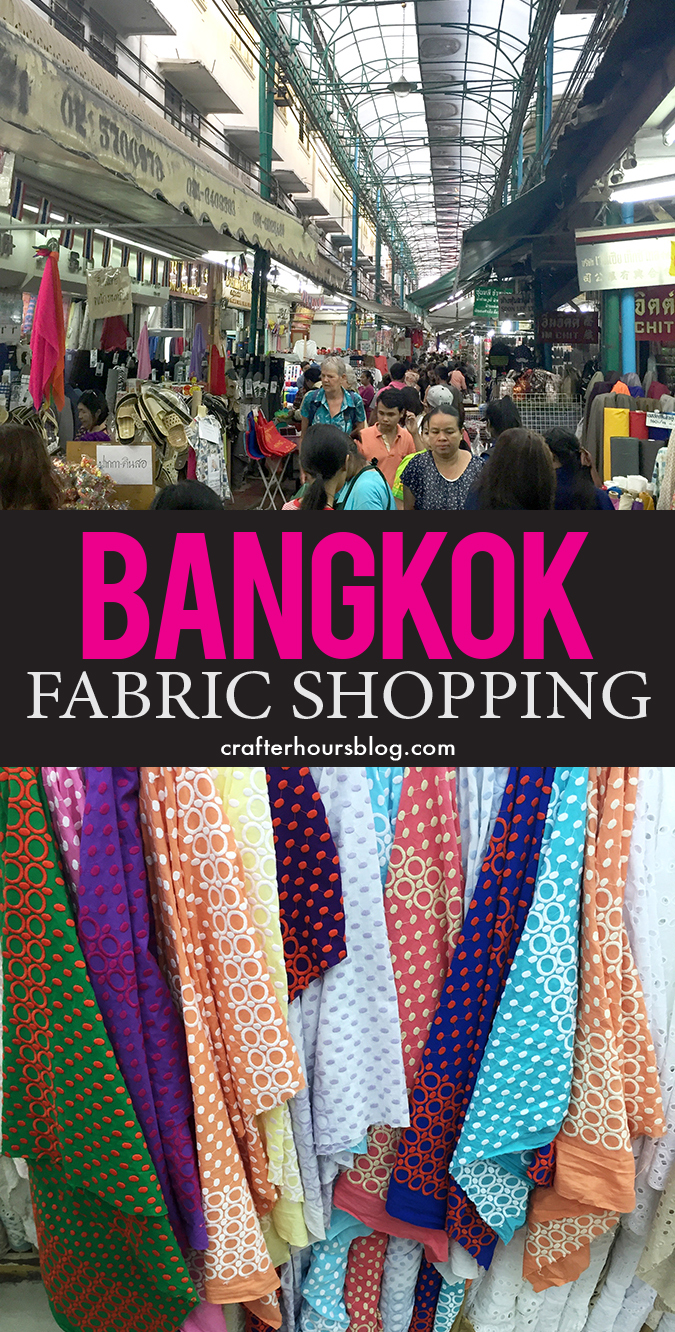 « How to Make (a LOT of) Ribbon with a Serger!
If you see a seam ripper… FREE PRINTABLE »