Ooooohkay, it doesn’t have the same ring to it that other “weeks” or even “months” do. It’s not so much a theme related to the end-product as much as to the staple. A staple we love. It’s versatile like ribbon, but sturdier. Soft like fabric, but with no lengthwise edge finishing to make it bulky. It’s not slippery, so it’s struggle-free to manipulate and sew. It has a natural, simple appeal and it’s easy and so so so satisfying to work with.

I guess we should start with how twill tape week came about. There’s this guy. He doesn’t know this (until now) but we call him “twill tape guy”. His name is John, which is certainly easy enough to remember, but “twill tape guy” has just been fun to say. As in “Hey, Adrianna, did you e-mail twill tape guy back yet?” and “Hey, look what twill tape guy said!” He’s cool, I’m guessing he won’t mind the label.

We looked at his site. He sells twill tape in BULK. Like a 72 yard roll! And we thought WHO could use that much!?! Well, then we looked at the cost. Very reasonable. So we said to twill tape guy: “Sure, we’ll see what we can do with some and maybe it’ll turn into a post. We have a reader or two who might enjoy a hot tip on some craft supply fun.”

So twill tape guy sends us ALL OF THE TWILL TAPE ON EARTH. Okay, not really. We said that if we could choose, we’d like white and natural colors in varying widths, some light and some heavyweight. He has lots of colors, too, but we were trying not to be greedy. And when we opened the package, our eyes bugged out a little. It was a loooot of twill tape. Even after we divided it in half and each went home with some, it was a lot. 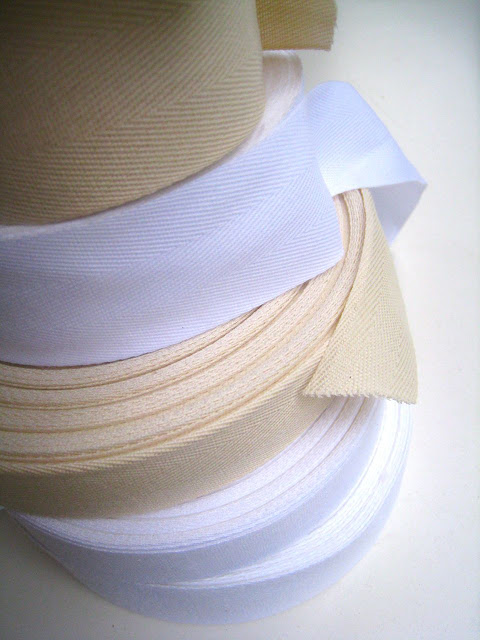 And then we got to work. And suddenly, we were thinking of uses all over the place. So this week, each day, we’ll be posting at least one little gem of twill tape goodness. We hope you enjoy them, or at the very least, don’t delete us from your reader for indulging in major geekiness.

P.S. Are YOU at least slightly geeky and/or giddy about twill tape too? If you’re a blogger and have projects to share, or not a blogger but would still like to spread your twill tape love, send us photos/links at crafterhours@live.com by Wednesday evening. There’s a roundup in the works for the end of the week!