I’ve tried hard to remember whether I had a Viewmaster as a kid. I know I played with plenty of them, but I think it was always at other kids houses. I don’t think I was neglected in the toy department, it just happens that I never had one myself, so when someone with Image 3D e-mailed us a few weeks ago and offered to let us make one (and give one away!) I think it was kid-me that answered “Yes! I’ll try it!”
Image 3D allows you to choose a viewer (white, black, red, blue) and create your own reel for about $25 + shipping. The viewer will also work with Viewmaster reels. If you *have* 3D images, you can go crazy with those, but I’m not that fancy. I just chose 7 family photos from the last year. In the interest  of fairness, I chose two group photos, two of each kid and one Roscoe, the older of our two beagles. Don’t tell the younger beagle he didn’t make the cut, mmmkay? 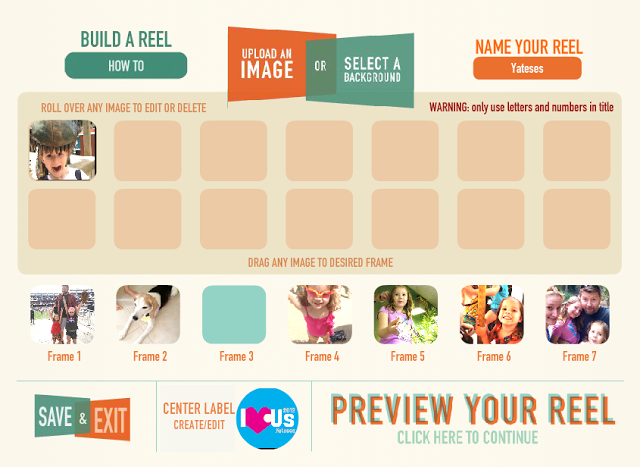 Uploading and arranging the photos was really simple. I also made a center label. The only problem I ran into isn’t really worth mentioning because it was one of those things that only *I* would have a problem with. Since I’d labeled the reel with “I <3 Us” I tried to use that as the name of the reel on the site. Apparently, using something other than a number or letter in the name is a bad, bad plan. It wouldn’t even let me re-open the file to edit it and I had to start over. In computer language I’d hurled a “your motherboard is so old that…” joke. I spent over an hour trying to avoid that and then it took all of two minutes to reassemble. Moral of the story: don’t get so wrapped up in your own cleverness that you forget to read the “WARNING: only use letters and numbers in title” that is so clearly there.
The reel preview let’s you advance just like you will when the viewer gets to you. I love a creative interface that is so detailed. (Hear that, computer? A compliment. Sorry about the motherboard joke.) 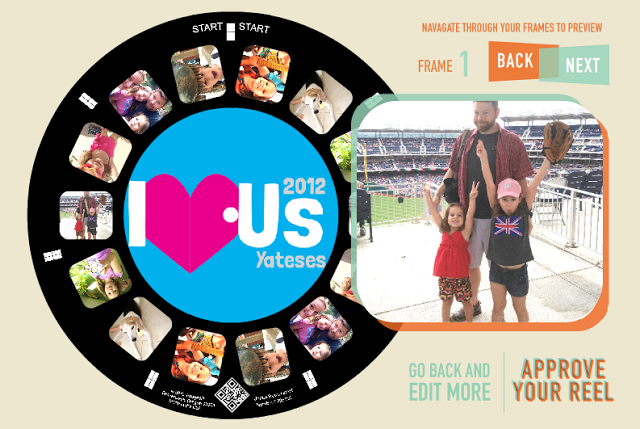 And now– it’s here! I think it only took about a week from order to arrival. I’m trying to decide whether my Grammy would think it’s cute or just silly to send her one of these. (I love picturing her friends passing it around at the dinner table where she lives!) I chose the white version because I love clean and simple, but I expect that the girls will attack it with stickers sooner or later. 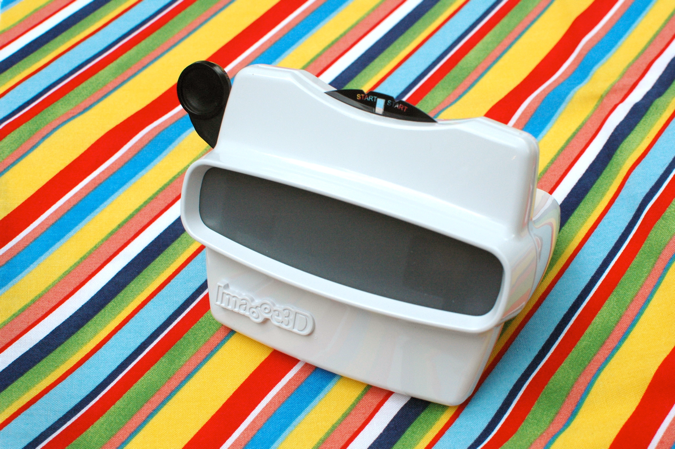 The finished disk is transparent in the middle rather than a paper label you’d find on an old school Viewmaster. 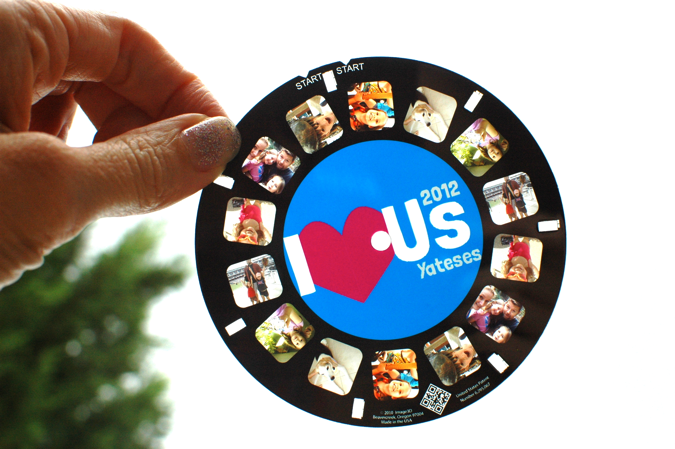 K was the first to check it out. (Also, the internet debut of her much shorter hair.) 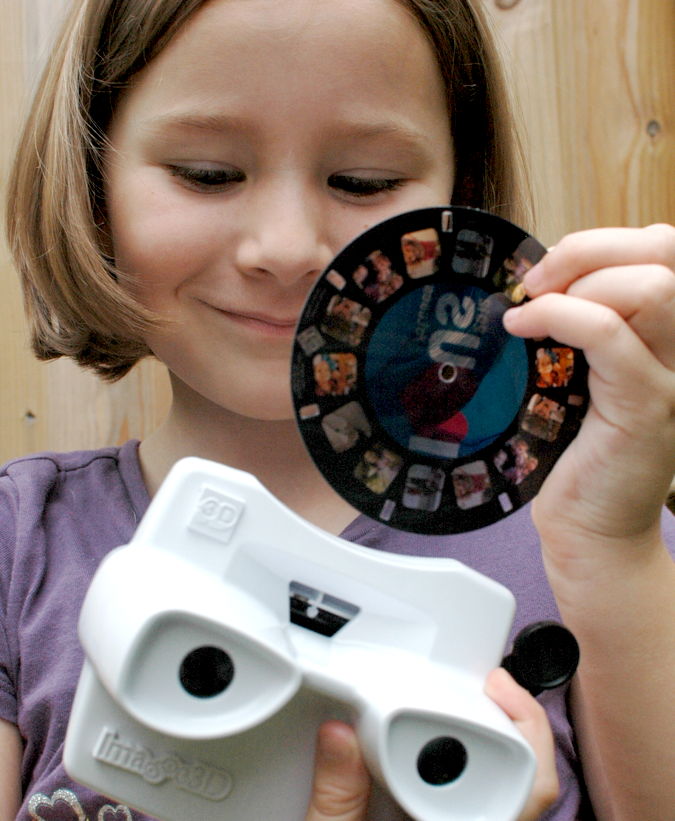 While through the images, she said “so, these are like old memories?” Umm, yes. Last month is ancient history. 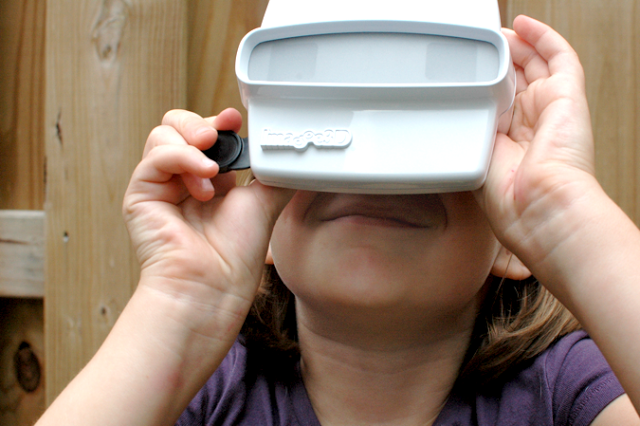 M took a turn checking it out too, asking questions about the photos. 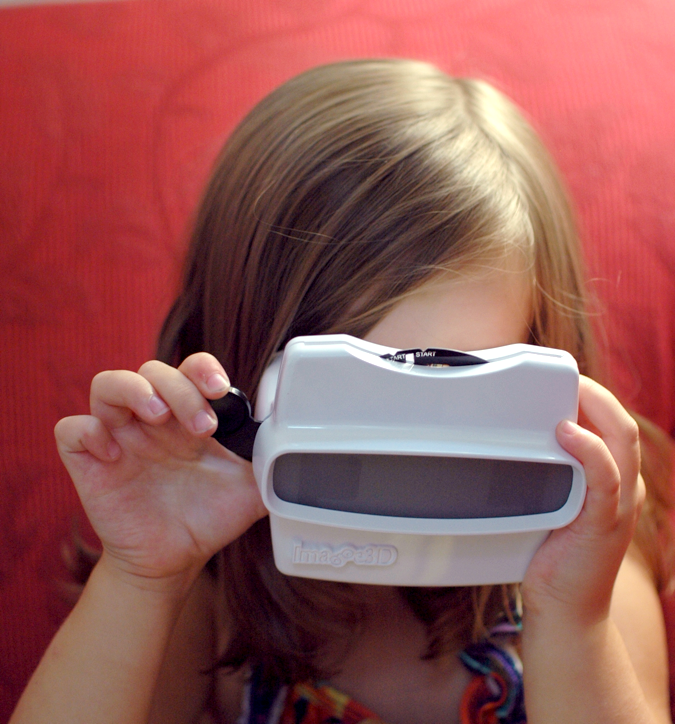 I love when I can capture her reactions – so often I miss them as far as the camera goes. But this is her genuine “wow” face. I could eat it up. 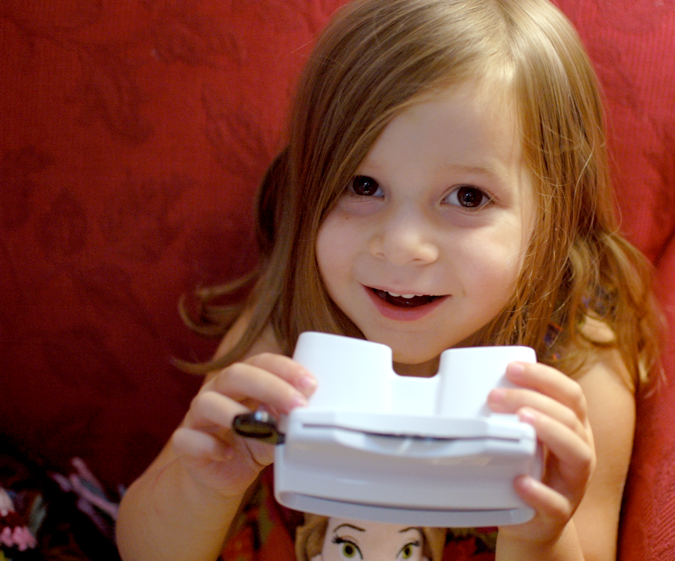 I love our family reel, and now I want to add a few classic reels to our collection too. Are you ready to win one of your own? Leave a comment on this post. That’s simple enough, yes? The winner will be selected on Monday morning and posted on our Facebook page.

If you’d like to find Image 3D online, you’ve got lots of options: